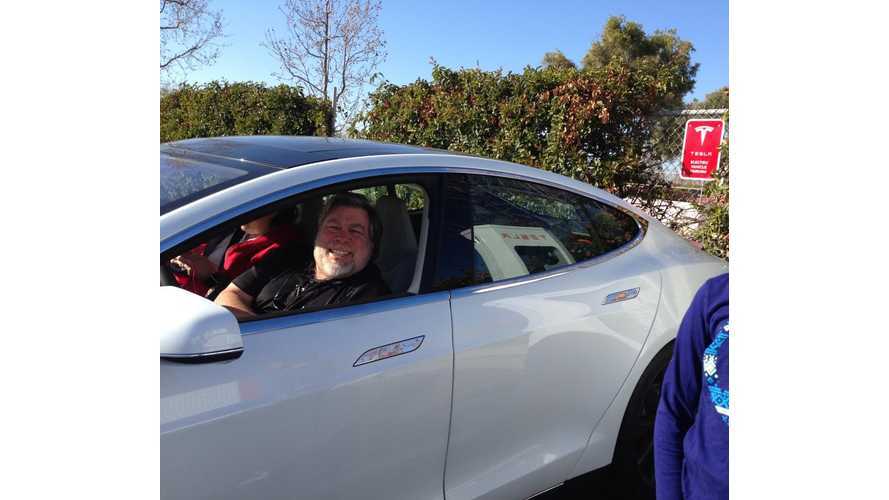 In a recent interview with Bloomberg Canada, Woz praised Tesla for its initiative to put tremendous effort into risky pursuits, well ahead of the competition. He also had nothing but positive words to share about Tesla CEO Elon Musk, and his ideas and vision. Woz even endorsed The Boring Company, which hasn't received the utmost support or praise from several others.

Steve Wozniak and his wife own a few Tesla vehicles. It's been bit confusing with different media reports as of late, but we know that he bought his first Model S back in 2013.

In fact, he almost folded on that deal, but his wife Janet convinced him to move forward. There was a time recently when Woz bought a Chevrolet Bolt as well, and it wasn't quite clear as to whether or not he still had the "old" Model S. Then, Janet bought him a Tesla Model S P100D this past Christmas.

Woz hasn't had the most positive words to say about his former company, Apple. He doesn't believe that Apple is quite what it used to be, and has gone so far as to say that the tech company is no longer the top innovator. When asked in the Bloomberg interview, which company is going to be the next key player with tech breakthroughs, he responded:

He points to Elon Musk for the company's drive and success. Musk built a car to match his own life, regardless of expense or practicality. Other companies have dabbled with electric cars and self-driving tech, but Tesla has gone in head first, despite analysts thinking that the ideas were crazy or far-fetched. Woz continued:

The Model S "was really built for Elon Musk. When things come from yourself, knowing what you want in life and being in control of it, not letting others get every little aspect in it, that’s when you get the best products.”

“They start with a car, the Tesla Model S, that made little sense in engineering terms, in how much you have to build for what price and what the market will be. But it fit one person's ideal of this will be the most beautiful, you know, a very beautiful, elegant and simple device to use."

Woz also spent some time addressing artificial intelligence (AI) and its imminent use in the automotive field. He actually said that although some companies are researching and testing multiple uses for AI, like having computer systems eventually run entire companies, the technology is best suited for cars at this point. Woz shared:

“We’ve got artificial intelligence in driving cars. That’s probably the biggest, most obvious moonshot because everyone knows it is probably going to be very successful in changing our lives hugely. And so many companies, almost every car manufacturer in the world, is secretly running self-driving cars in the background. In my mind, we are not far off where a car will be sold with no steering wheel."