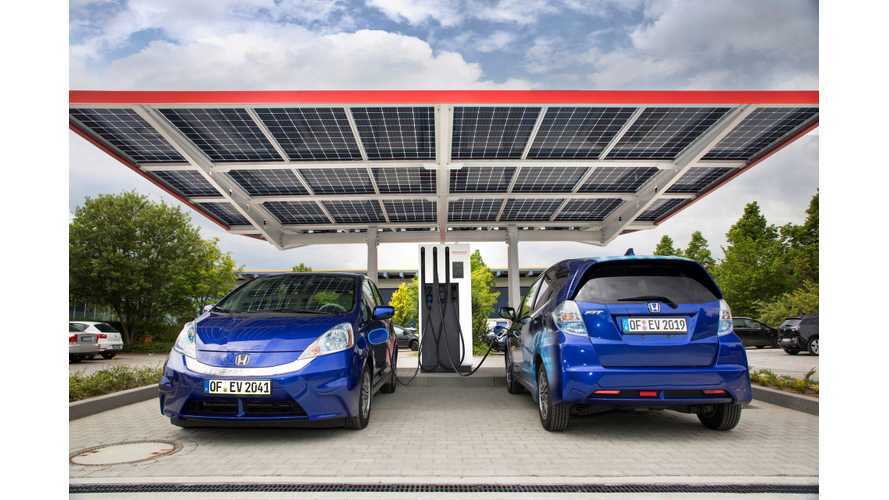 A new "state-of-the-art 940V"  charging station set up at Honda's Germany R&D facility is capable of delivering up to 150 kW of power, but as we understand it - across four simultaneous connections (we believe: 50 kW CHAdeMO + 50 kW CCS Combo + 43 kw AC Type 2 and one more lower power AC Type 2 inlet).

In other words, it's not possible to charge an EV at 150 kW (perhaps it will be in the future), but rather four cars at a combined 150 kW.

And as one might expect for the an advanced"station, it also generate power via a solar carport canopy.

Honda's long term goal is to have electrified powertrains (hybrid, plug-in hybrid, battery electric and fuel cell) in two thirds of its European cars sold by 2025.

"Europe’s most advanced public charging station for plug-in vehicles has been opened by Honda at its R&D facility in Offenbach, Germany. The station uses state-of-the-art 940V technology, enabling up to four vehicles to charge simultaneously with different types of connectors.

The public charging station is powered by renewable energy sources, including via a photovoltaic carport canopy. Its 940V capability can deliver up to a maximum of 150kW of energy across four simultaneous connections.

The charging station will be operated by Honda R&D Europe and is ‘future proofed’ for the next generations of electric vehicle technology. While the station can be used by current models of plug-in cars, vans, bicycles or scooters, its maximum high-voltage capability is designed to cope with the demands of future vehicles that have not yet been conceived.

Honda R&D Europe’s investment in the charging station is part of the ‘Smart Company’ research project within the city of Offenbach, which aims to develop more intelligent and efficient ways of using energy resources. The 940V capability will enable new possibilities for Honda’s internal research into electromobility, in line with its recently-announced ‘Electric Vision’ strategy.

In a later phase of the research project, Honda R&D Europe intends to install a new hydrogen filling station with integrated hydrogen generation at the Offenbach site. Like the 940V plug-in charging station, it can be supplied exclusively with power from renewable energy sources. It will also have intelligent back-to-grid energy storage and transmission capability for the local power networks."

"The 940V public charging station was officially opened on 29 May 2017, at a ceremony presided over by Bernard Massberg, Head of Mobility for the Hessian Ministry of Economics, Energy, Transport and Regional Development, and the Mayor of Offenbach, Horst Schneider."

“We see Europe and especially Germany as one of the most important regions for expansion and progress in electromobility. Honda R&D Europe is intensifying its research efforts at its Offenbach site and is contributing to the rapid expansion of the public charging infrastructure.”

“We are pleased with the exemplary commitment by Honda to implement its flagship project here in Offenbach am Main. For us, electromobility is central to all measures for air pollution control, climate protection, parking regulations and municipal planning, and of course also for the city of Offenbach’s climate adaptation.”