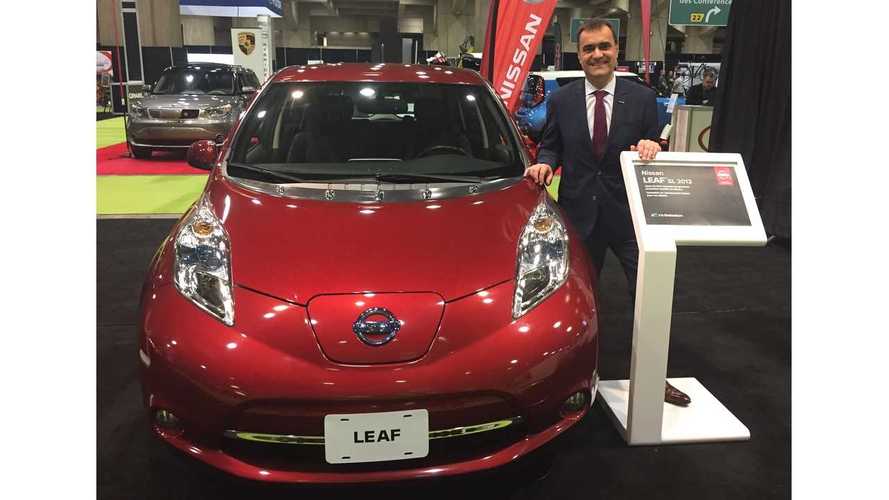 Nissan has launched its "LEAF Qualified Pre-Owned Program" in Quebec for 2013 and 2014 model year cars, that will now receive a $4,000 provincial incentive.

As part of the rebate stipulations, the car need be procured from outside of the province of Quebec (so as the province's 'on road count' increases), and is available to residents for purchase or lease.

Sounds like a good deal for Quebecers, and a good outlet for Nissan's ongoing rash of LEAF lease turn-ins before the next generation's debut this Fall.

Those that come from the U.S. will be modified to meet Canadian regulations. Basically: the "winter package" and DC fast charging capabilities are to always be standard.

This new effort is part of a Quebec government push to get 100,000 plug-in cars on the road by 2020; which quite honestly (and refreshingly) seems doable.

"Quality-Assured, Pre-Owned Nissan LEAF vehicles will be available for purchase or lease in the province of Quebec complete with a $4,000 provincial incentive as part of the province's Drive Electric program. In order to qualify, the Pre-Owned Nissan LEAF vehicles must be registered outside of Quebec, and either 2013 or 2014 model year. This marks the first time Canadians have the option of owning a previously owned fully-electric vehicle, while still benefitting from a provincial incentive.

The Nissan LEAF Qualified Pre-Owned Program contributes to the Quebec Government's objective of increasing the number of electric and plug-in hybrid vehicles in the province to 100,000 units by 2020. Click here to learn more about the Pilot Project for Used Vehicles. Having transformed the performance, practicality and public perception of EVs around the world since its launch in 2010, Nissan remains the undisputed leader in EV technology."

The 2013 Nissan LEAF (seen here on the model's 3rd birthday) is barely recognizable from the 2017 edition of today. /sarc

"The LEAF vehicles coming from the U.S. will be modified to meet Canadian regulations. This includes an OEM harness for the daytime running lights, and units will be converted to metric. The certified Nissan LEAF dealer will also install a 4.5L windshield washer fluid tank vs. the 2.5L on the U.S.-sourced LEAFs. The Pre-Owned Nissan LEAFs will be equipped with a Quick Charge port to enable charging with a level 3 DC Quick charger, along with a winter package that includes: battery heater, heated outside mirror, heated front seats and heated rear seats, heated steering wheel, and RearView Monitor.

Nissan Canada Finance (NCF) will offer eligible customers a 3.99% lease rate on 36 months for the LEAF SV and LEAF SL. For customers that prefer a loan instead of a lease, NCF will also offer a special loan program for both the SV and SL trims on 48 and 60 month terms with rates starting as low as 1.99%.

These LEAFs will be available through Certified Nissan LEAF dealers in Quebec. The Pre-Owned Nissan LEAF vehicles must be sourced from outside of the province of Quebec, and will have to respect quality criteria to qualify for the program.

All Quality-Assured Pre-Owned Nissan LEAFs will also come with a manufacturer limited extended warranty of three years or 40,000 kilometres.*

*some exclusions apply, please contact a Nissan dealer for details. "