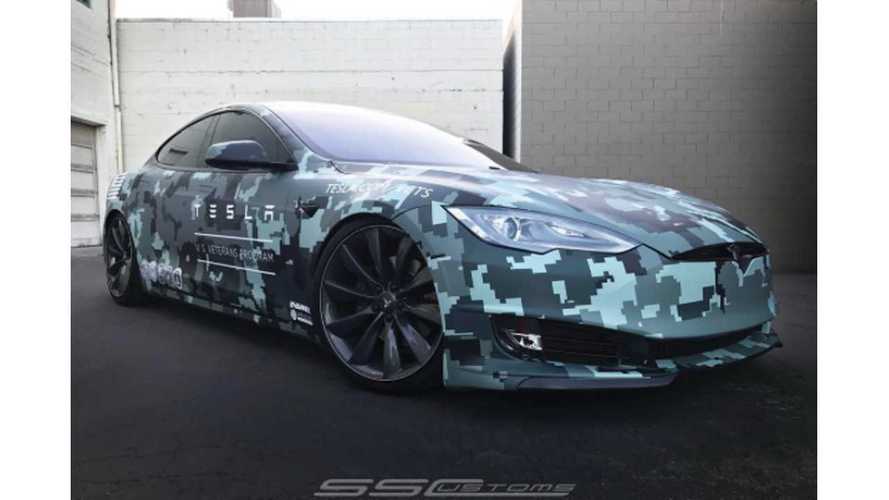 Yesterday, SS Customs released official photos of a "Special Ops" project it's doing in conjunction with Tesla. They've created an all-new camouflage Tesla Model S and unveiled it this Memorial Day. To pay tribute, SS Customs wrote, "Our debt to the heroic men and valiant women in the service of our country can never be repaid. They have earned our undying gratitude. America will never forget their sacrifices. From all of us at SS Customs, we wish you a safe and pleasant Memorial Day."

SS Customs posted a number of photos yesterday and explained the project: "With respect, honor and gratitude, Have a blessed Memorial Day / special project by SS Customs with Tesla to commemorate the #TeslaVets program."

At EVANNEX, we're also proud to be included in Tesla's newest "Special Ops" project with SS Customs. We're honored to have participated with SS Customs and Tesla on this one-of-a-kind Model S. To that end, we donated aftermarket accessories including the Lighted T and Wheel Bands to add something unique and distinctive to the vehicle.

In the past, Tesla has worked with SS Customs on a number of other high-profile projects. SS Customs also created a military-themed silver vinyl wrap on a Model X along with a green camo wrap on a Model S for Tesla. The latest Model S "Special Ops" project unveiled yesterday features a stunning new blue/grey/black/white camo color combination. On the rear bumper, it states: "Home of the free because of the brave." The vinyl wrap also includes American flag artwork on the panoramic roof of the Model S as well.

Tesla also has a long history of supporting those who've served in our military. And Tesla was recently recognized as a military friendly employer through MilitaryFriendly.com. For those that want to learn more about this, visit: tesla.com/vets.

We, at EVANNEX, also want to extend our heartfelt thanks to those who've served and to remember and honor those fallen heroes who risked their lives to protect our country.