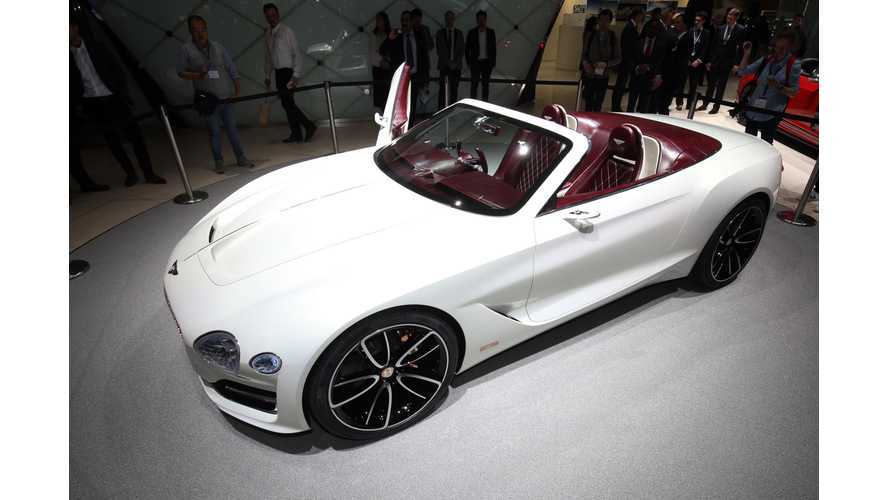 Besides its official goal to offer all of its models with a plug-in hybrid option -  starting with the Bentayga in 2018 - Bentley has all-electric models on its mind, too. At the Geneva Motor Show, Bentley has unveiled the EXP 12 Speed 6e concept.

Specific range and general technical data remain unknown, but according to our friends at Motor1, images of the cabin show a 257-mile (413-km) range on a digital round display. We suspect a range of 300 miles (500 km) on a single charge to be achievable, making London to Paris or Milan to Monaco possible.

The other things is "rapid charging" capability (without kW numbers) and fast wireless charging.

Bentley’s vision is for customers to benefit from high-speed inductive charging and provide a range sufficient for grand touring requirements.

The EXP 12 Speed 6e concept remains as luxurious as any Bentley, but it also represents a bold statement on the future of electric cars from the British company, which is of course part of Volkswagen Group.

Check live photos, videos and detailed description of the concept below:

A New Vision for the Future Making its debut at the 2017 Geneva International Motor Show, the EXP 12 Speed 6e concept represents a bold statement on the future of electric cars – and of luxury mobility.

Designed to transform the EV sector in both concept and execution, the EXP 12 Speed 6e fuses the unrivalled hand craftsmanship for which Bentley is famous, with electric performance, heart-stopping design and the range of a true grand tourer.

The EXP 12 Speed 6e is a statement of Bentley’s intention to create the world’s first true luxury electric sports car – and an overt invitation for the public to feed back on Bentley’s vision for the road ahead.

The EXP 12 Speed 6e is not just an opportunity to envision an electric Bentley. It represents the future of Bentley design, both inside and out.

The exterior body shell is a sleek expression of sports car design, inspired by contemporary architecture, aircraft fuselages and the geometry of the natural world.

A natural evolution of Bentley’s design DNA, it takes the marque’s trademark muscular haunch and powerline to exhilarating new heights. The short front overhang, long bonnet and wide, planted rear aspect all contribute to an unmistakable sense of speed, while the iconic matrix grille features an exquisite smoked stainless steel finish. Contrasting copper highlights offer subtle acknowledgement of the car’s status as a fully electric vehicle, while an illuminated ‘6’ logo can be seen through the grille.

Throughout the car, form coexists with function to support a more sustainable future. The twin bonnet scoops, for example, double as heat sinks, keeping down the temperature of the car’s batteries and drivetrain, without the need for additional cooling technology.

Bentley’s future is one of innovative materials as well as inventive technology. The entire central tunnel, for example, is hewn from a solid piece of glass, encompassing a high-definition OLED curved display. All principle onboard controls are accessible from here, including navigation, entertainment and climate control.

Just as they do on the outside of the car, copper details provide visual interest throughout the cabin, adorning the gear selector and Bentley Dynamic Drive dial control. Even the veneer panels inside the doors feature copper accents, drawing the eye to the handcrafted, natural wood finish.

Tomorrow’s luxury customers will expect intuitive technology and traditional craftsmanship to be integrated seamlessly – a demand that has dictated much of the car’s groundbreaking design. The wing mirrors dispense with the usual reflective glass in favour of cameras, feeding visual input directly to the dash. It’s one more example of Bentley’s future design direction – and the company’s ongoing commitment to exceeding customer expectations in everything it does.

Luxury is only one side of the Bentley equation. That’s why the EXP 12 Speed 6e has been conceived as more than just a showcase of design and craftsmanship. It is an entirely new format for both urban and open-road driving.

Electric power provides an opportunity to exceed the performance limits of cars built on the conventional combustion engine. From a standing start, electric motors deliver phenomenal levels of torque, which translates into heart-stopping acceleration.

In order to deliver a true grand touring experience, the EXP 12 Speed 6e would be built with the capacity to drive from London to Paris or Milan to Monaco on a single charge. This impressive range would be supported by fast recharging, thanks to inductive technology.

Not all new concept cars are truly innovative. The EXP 12 Speed 6e is about much more than a car, however. It represents a first step on a journey that will change the way today’s drivers think about mobility and what it can be. From rapid charging and fast acceleration to a world of connected lifestyle services, where onboard concierge software responds to complex voice input, the world of luxury transport is set to change immeasurably.

For Bentley’s design team, this means looking beyond the horizon, to a day when drivers become passengers and car ownership gives way to transport as a service. The car of the future will be more luxurious, more sustainable and more autonomous than ever before.