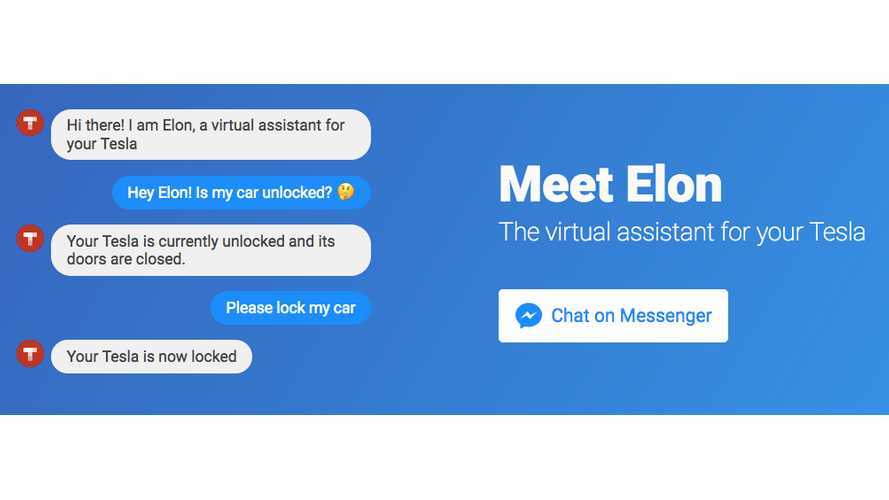 The future continues to arrive.

I'll be honest here: I have no patience for Facebook's constant attempts to get me to use its Messenger program to do things other than, you know, message my friends. For some reason, the social media giant thinks people want to shop or watch sports with an AI on their phone. I'm too old for that sort of nonsense, but I appear to be in the minority. So, if you think a chat-based interaction is a cool way to talk to your electric car, I'd like to introduce you to Elon, the "virtual assistant for your Tesla."

Developed by Smartcar (no connection to the Daimler brand), the new TeslaBot app lets you message back and forth with its cleverly named AI to send simple commands to your Model S or X. That means things like locking and unlocking the car's doors, opening or closing the charge port, or setting the car's interior climate, once you log in with your Tesla account.

In a December 2015 post that's since been removed, Smartcar shows it believes (believed?) strongly in the power of connected cars, saying that 47 percent of drivers want "connected features" in their next car. Whether that means a better Bluetooth option to stream a podcast or a way to have your Facebook friend "Elon" turn up the sound is perhaps best left to our imagination.

"Elon" might not be the last way Smartcar will connect Facebook and your electric car. Engadget says that the company is also working on a messenger app for Hyundai Ioniq owners. You can see Elon the bot in all of its quiet action in the video below.