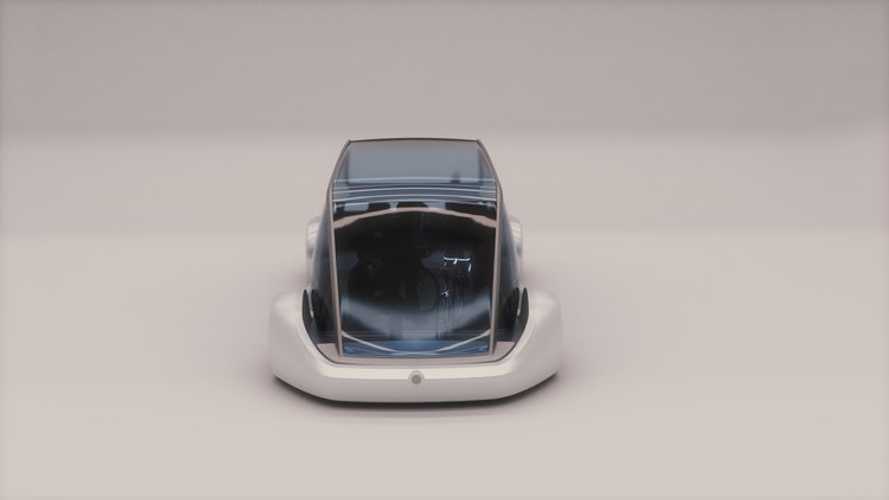 Now we get a closer look at Tesla's electric multi-passenger skate concept that may be used in The Boring Company tunnels and/or the hyperloop.

If you watched Elon Musk's original computer-generated teaser of The Boring Company concept, you probably caught a quick glimpse of a multi-passenger transport vehicle, aside from the Tesla Model S and X. Some people didn't catch it the first time through, and many people's initial comments surrounded the fact that the system may not be very efficient if it's transporting large, heavy vehicles with a single passenger. Not to mention ... where do all these vehicles park?

However, Musk had already thought that through. He never gave it much attention, but in the video, there was an unexplained, mostly glass, space-age looking pod filled with people, sitting on an elevator. But the elevator was unseen, as it was below the vehicle's permanent skate-like frame.

Note the similarities between the skate beneath the Tesla Model S, and the bottom frame of the multi-passenger vehicle.

If you take a closer look, the skate portion that the Model S and X parked on to transport into the tunnel is the same structure that appears to be permanently attached to this multi-passenger concept. So, it's as if it's almost a permanent passenger skate that stays on a street for public use. But, you can see from these new pictures, the skate itself has wheels ...

We aren't really quite sure exactly what all this means. Perhaps Musk is attempting to generate more dialogue, and will eventually answer questions, or reveal further information.

Does the glass enclosure come off of the skate with its wheels, so that it can be moved, or something else can go in its place? Is it an electric autonomous vehicle that can move independent of the skate (there's obviously no place for a drivetrain, but why the wheels)? Will it replace the previously planned Tesla minibus? Is there a connection to the hyperloop?

It will surely be interesting when we are able to secure some additional details.