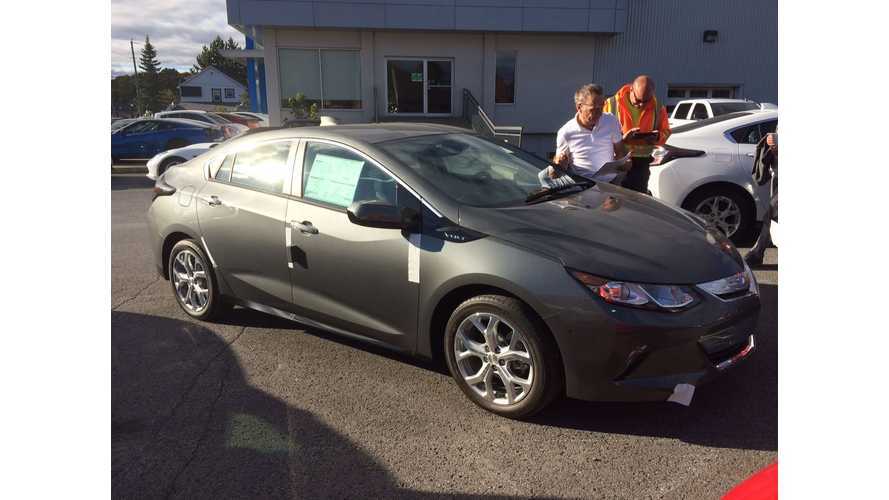 Canadian sales for the first two months of 2017 are in, and like in the US, the Chevrolet Volt is the clear leader.

Volt sales in January 2017 hit a very solid 256 units sold in Canada. That result was followed by 266 Volts sold in February, bringing the two-month total to 522 Volt sold thus far in Canada in 2017; making they Chevy the best selling plug-in for Canada.

If one wants to make a comparison to the US, the American market in 2016 was almost exactly 9x larger than that of Canada.  Meaning the 266 Volt sales in Canada for February, and the 522 sold YTD is roughly equivalent to 2,400 and 4,700 sales (respectively) in the US.

Trailing behind the Volt was the Nissan LEAF, after selling 65 units in January, sales doubled in February to 113 moved. The LEAF's two-month Canadian sales total stands at 178 units.

Meanwhile, sales of the Chevy Bolt kicked off in January in Canada by logging just 6 sales on very limited shipments. February was much stronger (albeit still with a strong dealer inventory availability issues), with 86 units sold. Its two-month total stands at 92 units.

Very few manufacturers take the time to split-out and report plug-in electric car sales in Canada (and we aren't inclined to go and do the footwork ourselves as we do every month in the US), so aside from the 20 i3/i8 sales in January and the 21 in February and 9 Mitsubishi i-MiEVs sold in the first two months, we don't have other two-month figures to report. However, we do know that Tesla sold 100 Model S and 114 Model X in January (February figures weren't available yet at time of press).