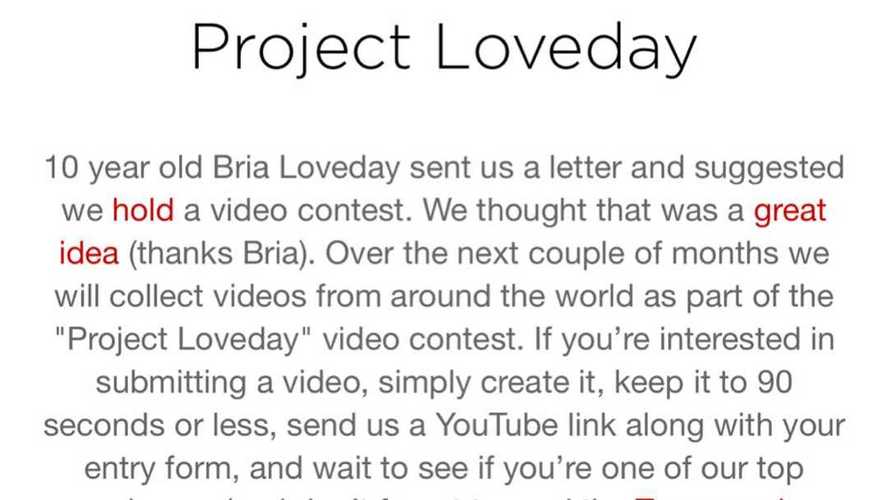 Over the years, we've been tracking some spectacular Tesla fan-produced video spots. Some by amateurs, some by aspiring ad guys, and some by true professionals. But all have one thing in common — Tesla didn't pay a dime for any of the videos. Just this week, news surfaced that Elon Musk agreed to a 10-year-old's recommendation to run a contest (and air) the best Tesla TV commercial produced by a fan. So we went ahead and compiled our favorite top 10 Tesla fan ads that have aired on Youtube over the past few years. But, first... how did a 10-year-old influence the larger-than-life business maverick Elon Musk?

If you haven't heard the news yet, InsideEVs writer Steven Loveday, was lucky enough to have his daughter gain serious influence over Elon Musk. How? Loveday's 10-year-old daughter, Bria "sent Elon Musk a personal letter, as part of a school project. She was asked to write a letter to a business, with a complaint, request, or suggestion… The teacher had hoped that some of the students would actually get a response back and that would later be shared in class. The letter was Tweeted to Tesla CEO Elon Musk and almost immediately a response came back: 'Thank you for the lovely letter. That sounds like a great idea. We’ll do it!'"

It turns out that Tesla fans have had a long history of creating faux TV commercials for the brand. Over the years, we've featured many of them here on our blog. Putting together a top 10 list was actually quite difficult — plenty of amazing videos didn't make the list. Furthermore, trying to rank these videos was challenging. Depending on your sensibility, aesthetic, and style — it's likely you'll disagree with our rankings. And yes... our #1 pick is controversial. It's more of a short fan film (or movie trailer) than a commercial. But we love it — it remains our all-time favorite Tesla fan video ever. In any event, take a look below and see if you agree with our rankings.

10. Step into the Future

Now I know some of you are cursing me out for leaving out some other absolutely stunning Tesla fan videos that have been floating around the web. Even though I can't mention all of them here... there is one that deserves — at least — honorable mention. In fact, it probably would have cracked the top 10 but it's not (yet) available on Youtube. Nevertheless I was able to track it down on Vimeo. So without further ado, here is our favorite bonus video...

As you can see — Tesla fans are massively talented at showing their passion for driving electric. We can't wait to see the videos that surface as a result of this new contest. Check back as we'll be sure to keep you updated on the best new Tesla fan ads that we come across while scouring the web. In the meantime, enjoy these videos!