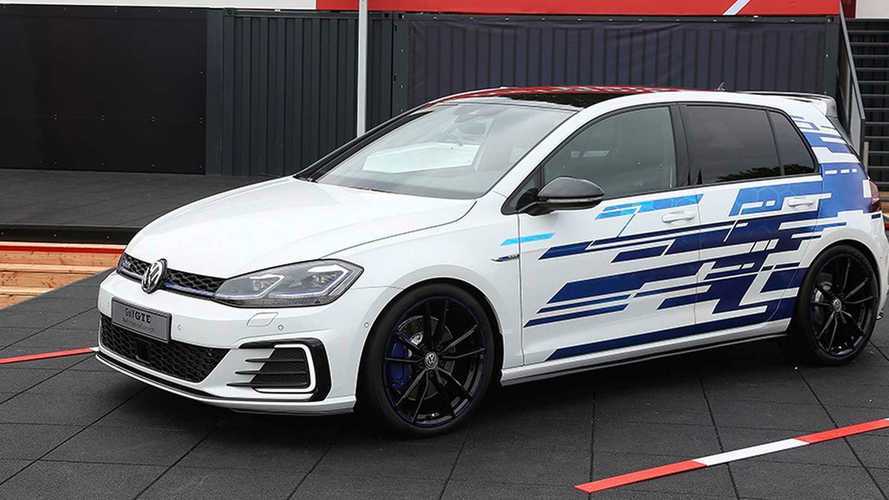 Hybrids and plug-ins seem to be the main theme for Volkswagen at the annual Wörthersee GTI meeting as after showing the electrified GTI First Decade and the Golf GTE Estate ImpulsE concepts, the folks from Wolfsburg have also unveiled the Golf GTE concept. Based on the recently facelifted production model, the one-off gets a striking paint with a rather odd name: Electric White Mother of Pearl Effect contrasted by black and blue accents.

It sits on two-tone 19-inch Pretoria alloy wheels featuring a similar black and blue theme backed by beefier 17-inch perforated discs with calipers finished in GTE Blue. Sourced from the GTI hot hatch are the diffuser and the dual exhaust tips while the roof-mounted rear spoiler was borrowed from the hotter Golf GTI Clubsport.

VW isn’t willing just yet to show off the concept’s interior, but it does say the leather-wrapped sports steering wheel was tailored-made for the GTE concept and comes with Alcantara touches and blue ’12 o’clock marking to denote the car has a hybrid powertrain.

Speaking of which, the 1.4-liter turbocharged gasoline engine and the electric motor have been massaged to deliver a combined output of 272 hp (200 kW) and 450 Nm (332 lb-ft) instead of the usual 204 hp (150 kW) and 350 Nm (258 lb-ft). Details about the Golf GTE’s performances have not been released, but the substantial power bump must have slashed a few tenths of a second from the 0-62 mph (0-100 kph), which in the case of the road-going model takes 7.6 seconds. Top speed has likely increased as well from the series 138 mph (222 kph) to turn it into a hot hatch from the new era of electrification.

As some of you may remember, a couple of years ago at Wörthersee, VW introduced the similarly named Golf GTE Sport (pictured above). That was a considerably more spectacular concept with an entirely different body and with 290 hp (220 kW) & 400 Nm (295 lb-ft) coming from a 1.6-liter TSI adapted from the Polo R WRC working together with a pair of electric motors. As it’s going to be the case with the new one, the 2015 concept was purely just for show.  Which is a shame.