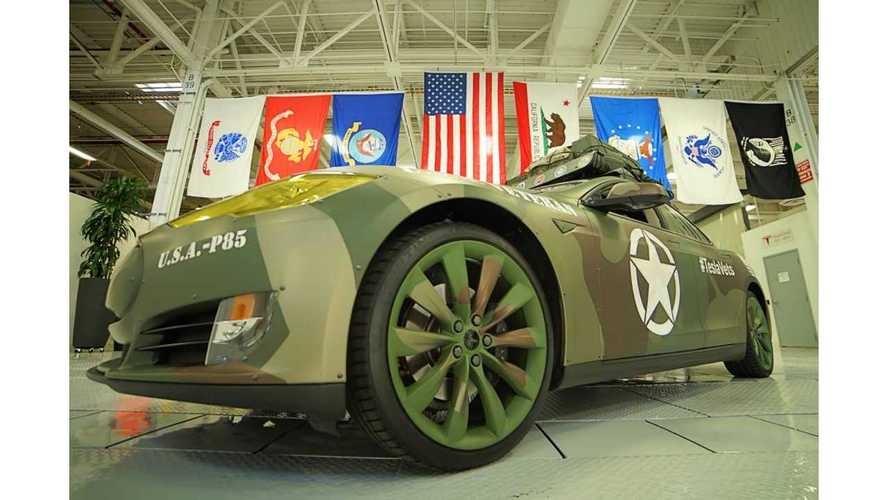 Even with the Trump administration's anti-green stance, Reuters* reports that "the largest U.S. government agency - the Department of Defense - plans to forge ahead under the new administration with a decade-long effort to convert its fuel-hungry operations to renewable power... the reasons have nothing to do with the white-hot debate over climate change. In combat zones, green energy saves lives by, for instance, reducing the need for easily attacked convoys to deliver diesel fuel to generators at U.S. bases. Mobile solar-power units allow soldiers to prowl silently through enemy territory."

Military spending on renewable energy projects has steadily increased and clean energy companies have benefitted. "Solar companies such as SunPower Corp and utilities including Sempra Energy and Southern have won utility-scale renewable energy contracts worth hundreds of millions of dollars in recent years, according to the companies and Department of Defense documents reviewed by Reuters...  SunPower has already landed a major deal under the Trump administration - a $96 million contract finalized on Feb. 3 to provide power to Vandenberg Air Force base in California until 2043, according to a Pentagon database."

With Tesla acquiring America's largest solar provider, SolarCity, in order to become the world’s only integrated sustainable energy company — could they be considered a contender for military contracts? Reuters speculates that "Tesla, which produces electric cars and batteries, is another company that analysts say could benefit from military contracts. A Tesla spokesman said the company is 'supportive' of the military's interest in clean energy but declined comment on whether it was pursuing Defense Department contracts."

Regardless, it's clear that "the military’s zeal for renewable power has already had broad impacts on energy contractors, generating hundreds of millions in contracts for solar companies and helping to reduce fuel consumption... The number of military renewable energy projects nearly tripled to 1,390 between 2011 and 2015, department data showed, with a number of utilities and solar companies benefiting. Many of those projects are at U.S. bases, where renewable energy allows the military to maintain its own independent source of power in case of a natural disaster or an attack - or cyber attack - that disables the public grid."

However... will this spending continue under Trump? "We expect that it's going to continue during the Trump administration," said Lt. Col. Wayne Kinsel, head of the infrastructure unit of the Air Force Asset Management Division for Logistics, Engineering and Force Protection. "It's really not political." Col. Brian Magnuson, the head of the Marines' expeditionary energy office, said his office aims to replace diesel-powered generators on the battlefield with solar power: "These technologies are a way to become more effective in combat.” And other senior officials in the Navy, Air Force and Army also told Reuters that they expected their renewable energy programs to continue.

Furthermore, "Trump's Secretary of Defense, Jim Mattis, has long supported efforts to reduce troop dependence on petroleum. He saw first-hand the vulnerability of diesel convoys to attacks by militants while serving as Commander of the Marine Corps Combat Development Command in Afghanistan and Iraq in the early 2000s. As far back as 2003, he urged Navy researchers to find innovative ways to unleash the military from the 'tether of fuel.'" And from a national security standpoint, reducing our dependence on oil (especially foreign oil) has been something that's been echoed by senior management at Tesla.