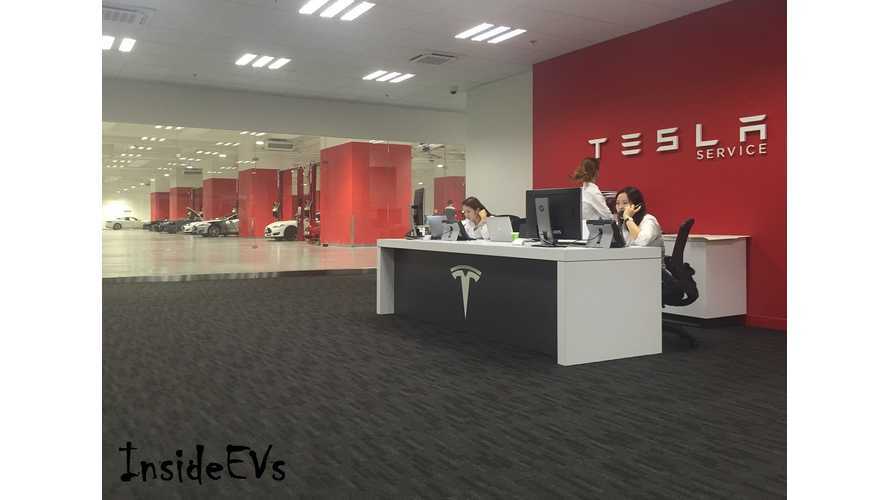 Tesla vehicle getting serviced at a company-owned service center

With the upcoming launch of the Model 3, Tesla stated it would expand it service centers and operations related to servicing the hundreds of thousands of additional Tesla that will hit the roads in the coming years.

Tesla promises to add to its infrastructure footprint ahead of the Model 3 (shown: Tesla Hong Kong Service Center in operation)

Part of that expansion seems to already be underway with the addition of a "Live Chat" feature on the automaker's MyTesla page.

"Tesla has introduced a new ‘Live Chat’ feature to the company’s MyTesla page, as it readies itself for the expected increase in customer feedback and service volume requests from Model 3 buyers.

The owner-specific MyTesla web portal now includes a red chat bar located in the lower right corner of the screen that enables a live chat with a Tesla representative."

Through "Live Chat," Tesla owners can get in touch with a Tesla technician to troubleshoot various issues directly. This will likely be beneficial for simple problems. A trip to the service center will still be required for anything major, but at least some problems (and an expectation of what a major repair might entail) will be able to be resolved over chat.

Tesla has long been criticized for extended wait times to get vehicles repaired and back on the road. With the launch of the 3 just around the corner, we hope Tesla can continue to cut down wait times for its vehicles in need of repairs.