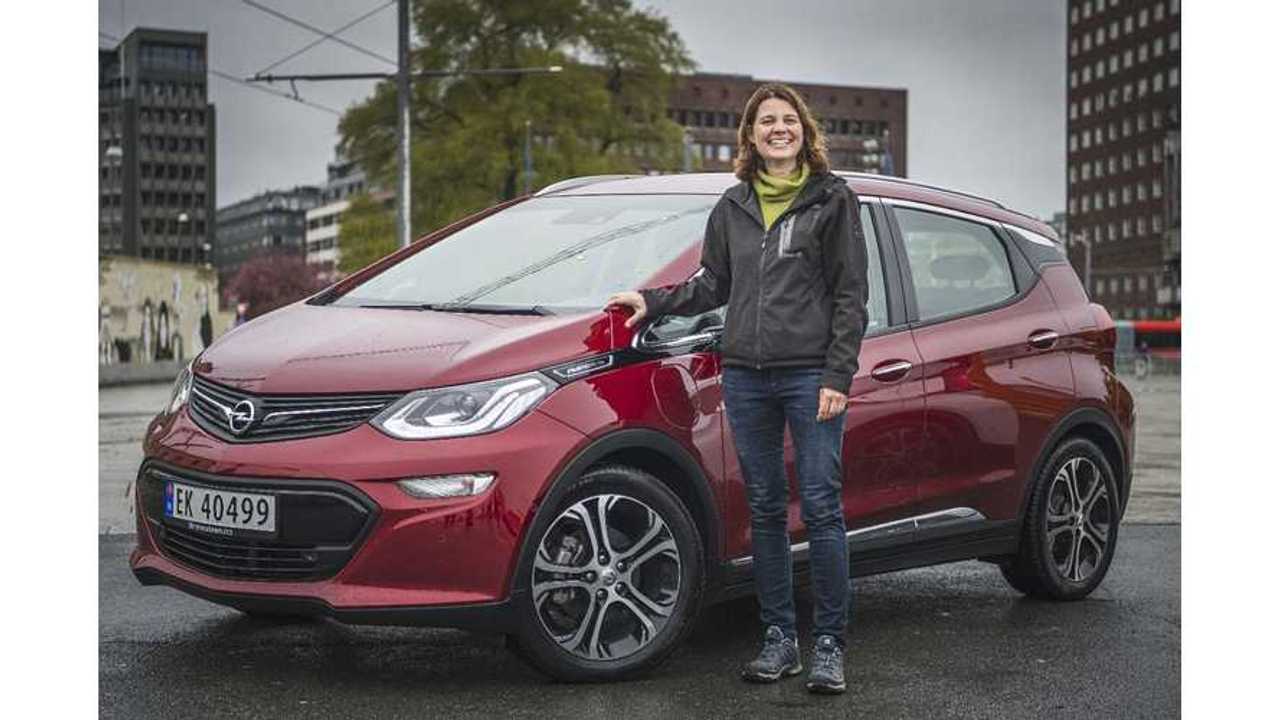 Opel has officially delivered the first three Ampera-e all-electric cars in Norway on the occasion of Norwegian Constitution Day.  Perhaps not surprisingly, and with the Holiday in mind,  the EVs were in the three national colors - red, white and blue.

First Opel Ampera-e deliveries in Norway...apparently flowers are to be gifted at such occasions

Norwegian customers are now awaiting the further arrival of more than 4,000 pre-ordered Ampera-es.

Not unexpectedly, Opel said that more deliveries will naturally follow in the coming days and weeks, but without further details about the depth of those numbers.

Of note: We have already learned it will take into 2018 for all the current pre-orders to be filled due to limited European production by GM out of America

"What better way to celebrate a national holiday than by being amongst the first customers in Europe to drive away in brand-new Opel Ampera-e. Three happy Norwegian customers marked Norwegian Constitution Day by doing exactly that after receiving their Ampera-e electric cars in front of the Oslo hall. More will naturally follow in the coming days and weeks.

The success of the Ampera-e in Norway, the most mature EV market in the world, is unrivaled. To date, Opel has already received more than 4,000 customer orders for the revolutionary electric car from Norwegian customers alone – some even placed reservations before it had even been revealed at the Paris Motor Show in October 2016. Now three customers have been able to collect their new electric cars. Matching the colors of the national flag, a red, a white and a blue Ampera-e were handed over to Turid Høiem, Bente Østreng and Helmer Teksdal."

“I am delighted that we have been able to present the first three proud Ampera-e owners with their cars. The Ampera-e makes everyday electro-mobility feasible and is presently the car to beat in its segment,”

Bente Østreng from Oslo, the proud owner of the blue Ampera-e, said:

"The Opel Ampera-e redefines electro-mobility with its electric range of 520 km (based on NEDC) – at least 100 km of additional range more than its nearest segment rival currently on the road. While the NEDC is important to create comparability, in the real world, factors such as road characteristics, weather conditions, driving style or additional load influence the range. Opel therefore also put the Ampera-e through tests similar to the speed profile defined in the WLTP driving cycle (shortened test procedure). The WLTP results are closer to real driving behavior. And the Opel Ampera-e also delivers here; based on these tests, the engineers estimate the combined WLTP range at 380 kilometers. Naturally, the range in everyday use will vary and depends on personal driving behavior and on external factors. However, the biggest obstacle to buying electric vehicles – range anxiety – is thus a thing of the past; and despite its future-potential, plus the advantages of pro-environmental electric mobility, the Ampera-e offers the acceleration of a powerful, traditional sports car.

With its fast running rivers and waterfalls Norway has the ability to generate clean energy based on electricity from hydropower. This makes the country a perfect habitat for electric cars. Combined with incentives like no sales tax, access to bus lanes and free parking, there is no country in the world where more electric cars have already been registered in relation to the population. More than 150,000 electrified cars are already on Norway’s roads – in a country with only five million inhabitants.

Opel is focusing on launching the Ampera-e first in the countries that already have some form of EV infrastructure in place or countries that have shown ambition to become EV leaders. It has been on sale in Norway since December 2016 and, as indicated then, deliveries to Norwegian customers are starting now. Germany and the Netherlands announced their prices recently and the first German and Dutch customers will get their cars before end of the year. Elsewhere, order books in Switzerland will open later this summer."