Qualcomm's Dynamic Wireless Charging Could Be A Sleeper Hit 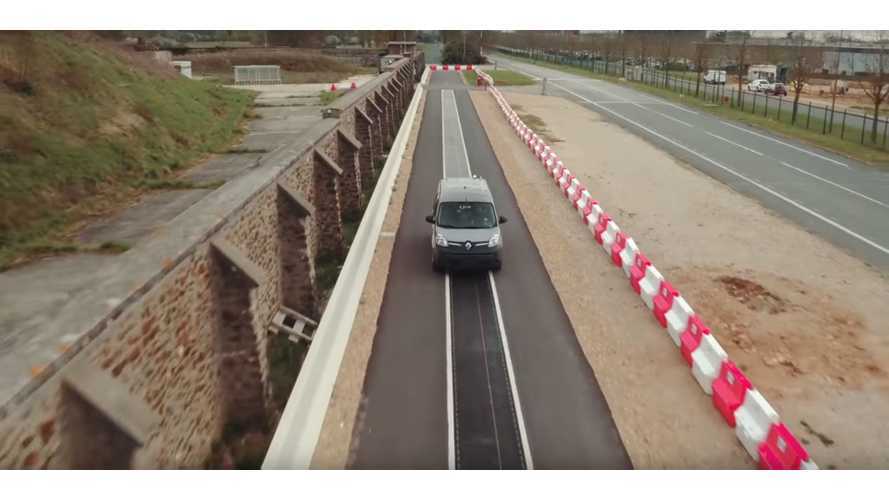 As technological breakthroughs go, this one is remarkable only for its very lack of drama. Silent, near invisible, impossible to touch, taste, or smell, Dynamic Electric Vehicle Charging (DEVC) nonetheless represents another dramatic technological leap for EV technology, one which may lead to 'electrified highways' becoming the norm within decades.

Pioneered by Qualcomm, the San Diego-headquartered tech innovation giant, DEVC is the fruition of beautifully simple idea: wouldn't it be wonderful if electric cars could be charged by the roads on which they drive, without any need for contact between charging source and an EV's battery? No more plug-ins, no more charging stations, just a constantly available power source, as enjoyed by any electric tram, but – crucially – freed of track and overhead cabling paraphernalia. Well, now they can. DEVC, as demonstrated by Qualcomm last week on a private test track near Paris, France, allowed two suitably equipped electric Renault Kangoo Maxi vans to pass over a 100-metre stretch of 'electric highway' and gain charge as they did so.

It looked effortless, simple and straightforward. Indeed, if you didn't know that the charging process was taking place before your eyes, you'd think the two Kangoos were nothing other than regular EVs.

Beneath their chassis, however, sunk into road surface whose blacktop is a deeper shade than regular Tarmac, is some exceptionally trick technology. It goes like this: the 100-metre track is comprised of four, 25-meter 'stubs', each of which runs from its own power supply. Each stub powers 14 so-called Base Array Network (BAN) blocks that are coupled magnetically into the backbone power cable. It looks like this:

Power is transmitted from road level across the air gap to two 10-kW vehicle pads (VPs) located under the EV. The vehicles' own internal systems then convert the 85-kHz AC and deliver DC power as requested to the EV's battery management components. The result is contactless charging on the move at speeds (as demonstrated) of up to 100km/h and with in-built tolerance of vehicle positioning over the charging strips. In other words, a driver doesn't have to drive in precise alignment with the stubs for a successful charge.

That's a whole lotta tech for a layman to interpret so Qualcomm have come up with their own rather more user-friendly term for the system: 'Qualcomm Halo'. Their hope – indeed, the business model upon which their heavy R&D investment is predicated – is that motor industry OEMs such as Bosch and Continental grasp the potential of DEVC, then drive its adoption by major manufacturers.

As might be imagined, a step-change such as this results from multiple technical iterations, multi-million-dollar investment and years of research.

Qualcomm's well-established static charging expertise provided the ideal starting point for DEVC development, as well as real-world motorsport credentials: the BMW i3 and i8 safety and medical cars that support the Formula E race series use static charging to ensure they're always primed to react to any rapid response situation, without any need to 'unplug' from a fixed charging station. This technology itself has its origins in low-power contactless charging platforms pioneered by Qualcomm for use in domestic electrical appliances and mobile devices.

"In more than 100 years of the motor car, the one thing we have not done is tie the car to a wall, yet plug-in EV technology requires that to happen," says Graeme Davison, vice-president of business development and marketing for Qualcomm. "The car is about freedom and getting in and getting going," he adds, "and our thinking was always 'What if you could charge your EV wirelessly rather than plugging in?' Halo takes away the requirement for a human to do the plugging in and for a manufacturer that also takes away the possibility off a human 'fail'. All these benefits help speed the delivery of the technology to a wider market."

An electric highway for everyman is likely decades away, but consider the advances already happening, or that are about to happen. Mercedes will shortly introduce a PHEV S-Class that relies solely on static charging for its battery; ie no plug-in. While this is an avowedly upscale application – one that also requires of its owner the installation of a domestic charging plate – it's from the top that technological drip-down begins.

Then there are the obvious real-world opportunities for dynamic charging that seem virtually to be begging for its arrival. For example, as city mayors increasingly mandate that public service vehicles and taxis be hybrid or full electric, the introduction of 'charging lanes' for their growing electrical demand, as they grind through the congested urban landscape, seems as inevitable as it is logical. Then consider the cab driver out of town, 20th in line at the airport taxi rank, advancing slowly in file, waiting for their next fare. Those 30 minutes 'on hold' present a perfect slow-speed dynamic charge opportunity.

In both cases, the requisite infrastructure upgrades could be made with limited disruption to existing transport architecture. An 200-metre Halo strip for an electric cab line at London Heathrow or JFK? The work of weeks, no more, with potentially transformative results for the EV ecosystem it would help support.

Meantime, racing applications could bring fascinating new dimensions to competition and add a veneer of sexiness to DEVC tech. Imagine a track with a 'charging line' away from the optimal 'racing line'. Maybe a driver reckons he needs an on-the-go charging moment to supplement his draining battery? So he heads for the 'charge' line, but at the risk of a compromised lap time that hands the advantage to his rival. How keen would any ambitious energy supplier be to ensure that their logos and proprietary technology were capable of giving a driver just enough of a power shot to seal their victory?

These ideas may seem radical, possibly even far-fetched for consumers deep-rooted in a culture of fossil-fuel-burning personal transport. Yet they are within touching distance and ripe for mass adoption, given the requisite political will and financial heft of both motor manufacturers and energy-supply titans, reckons Simon Arbuthnott, Qualcomm's senior director of business development.

"The technology is proven," he says, "so the next phase will come down to economics and willpower." Arbuthnott points to countries such as China and South Korea as those most likely to embrace dynamic charging early: "They have the government structure just to make things happen if they want to," he says, "and in China, then India, also, there is an increasing mandate for EV use." Those burgeoning markets are certain to exert gravitational pull on all supporting technologies, accelerating both speed of adoption and pace of development.

For now, a 100-metre strip of hi-tech test track, inhabited by a pair of Renault EV vans, fails to register on any scale of 'shock and awe'. But as a glimpse of a fast-approaching future, it is utterly compelling. Watch this (highly charged) space.