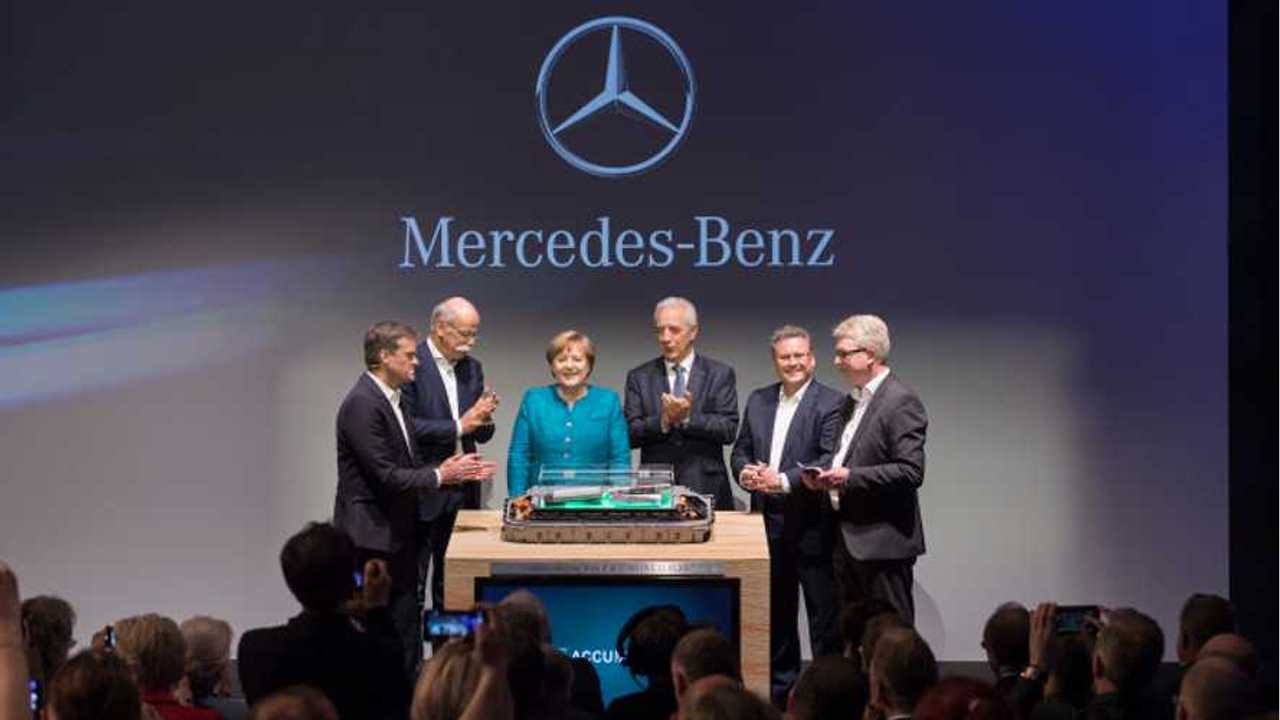 roundbreaking at ACCUMOTIVE in Kamenz for one of the world’s biggest and most modern battery factories: Federal Chancellor Dr. Angela Merkel in a conversation with Dieter Zetsche (Chairman of the Board of Management of Daimler AG and Head of Mercedes-Benz Cars) and two employees of ACCUMOTIVE accompanied by Minister President of Saxony Stanislaw Tillich as well as Markus Schäfer (Member of the Divisional Board of Mercedes-Benz Cars, Production and Supply Chain) and Frank Blome (Managing Director Deutsche ACCUMOTIVE GmbH & Co. KG).

The company names Deutsche Accumotive's facilities the world’s biggest, and most modern battery factories, while the media have dubbed it Daimler's battery Gigafactory in Europe.

However, Daimler's approach seems different than Tesla, as the factory will only assemble the packs for cars and energy storage systems. At Tesla cite they of course produce the lithium-ion cells  themselves, while Daimler is using lithium-ion cells from LG Chem.

The one number that we do know is €500 million, the cost of the second factory.

As of today, Deutsche Accumotive have produced around 80,000 battery packs in its first facility (for electric and hybrid cars, and probably also including also ESS).

Daimler's wholly owned subsidiary is expanding production capacity in a broader campaign to provide batteries for more than 10 all-electric models by 2022, as well as hybrids, plug-in hybrids, and energy storage systems sold under the Mercedes-Benz brand.

Daimler subsidiary ACCUMOTIVE starts construction of second battery factory in Kamenz - fourfold increase of production and logistics area up to around 80,000 m2;

By laying the foundation for one of the biggest and most modern battery factories, Daimler AG is setting new standards in the international automotive industry, thereby taking the next strategic step in its electric offensive.

At the wholly-owned subsidiary ACCUMOTIVE in Kamenz, the second factory for lithium-ion batteries is built with an investment of around 500 million euros. Guests of honour at the ceremony were Federal Chancellor Dr. Angela Merkel and Stanislaw Tillich (Minister President of Saxony), who, together with Dieter Zetsche (Chairman of the Board of Daimler AG and Head of Mercedes-Benz Cars), Markus Schäfer (Member of the Divisional Board of Mercedes-Benz Cars, Production and Supply Chain), Frank Deiss (Head of Powertrain Production and Site Manager Mercedes-Benz Plant Untertürkheim) and Frank Blome (Managing Director Deutsche Accumotive GmbH & Co. KG), laid the casing of a vehicle battery as the foundation stone.

“The automotive industry is facing a fundamental transformation and we see ourselves as the driving force behind this change,” says Dieter Zetsche. “The battery factory in Kamenz is an important component in the implementation of our electric offensive. By 2022, we will have more than ten purely electric passenger cars in series. We also continue to drive forward the hybridization of our fleet. Under the EQ brand, we are creating a holistic ecosystem for e-mobility.”

The investment of Daimler strengthens the region as a major innovation hub for the German automotive industry and offers employees good prospects in a future-oriented technology field. The Federal Chancellor and the Saxon Minister President were able to get an impression during a tour through the existing battery factory with two employees working in production.

Stanislaw Tillich stressed that “Daimler is focusing on Saxony for this important investment in Germany and Europe – I’d like to say thank you and welcome! Today’s foundation in the Lausitz is a signal of the future that is particularly strong. With the investment, Daimler plays a decisive role in consolidating the reputation of Saxony as a traditional and, at the same time, modern automotive region. The project stands for innovation and jobs as well as for the development of this region as a center of electric mobility.”

Daimler invests an overall amount of around one billion euros in a global production compound for batteries. “With the second battery plant in Kamenz, we are giving the initial start for the development of the first premium eBattery factory,” says Markus Schäfer. “The local production of batteries is an important success factor in our electric offensive and a crucial element in order to flexibly and efficiently serve the global demand for electric vehicles. This makes our production network very well positioned for future mobility.”

The new production facility, which is situated approximately 50 kilometres from Dresden, is scheduled to go into operation in mid-2018. Covering an area of around 20 hectares, the site is in the direct vicinity of the existing battery factory. The new plant will quadruple the production and logistics area in Kamenz to a total of around 80,000 square meters. In the next few years ACCUMOTIVE will gradually increase the number of employees at the site. By the end of the decade, ACCUMOTIVE will have a total of over 1,000 employees and thus more than double the number compared to today’s level.

“The German Chancellor’s visit at ACCUMOTIVE underlines the importance of electric mobility in Germany and the good perspectives for the future location in Kamenz. For our workforce, this is a great signal acknowledging their know-how and top quality performance in the last years. To date, we have delivered more than 80,000 batteries based on lithium-ion technology,” says Frank Blome. The second battery factory has been designed as a CO2-neutral factory with an energy balance of zero: Daimler’s approach to electric mobility is an integrated one, attaching key importance to sustainability already at the production stage. The production facilities will be supplied with energy from a combined heat and power plant and a photovoltaic plant in combination with stationary battery storage units. With state-of-the-art facilities and technologies, the new battery factory will also set standards regarding Industry 4.0.

With the Concept EQ, Mercedes-Benz Cars is presenting a new generation of electric vehicles. More than ten new electric passenger cars are scheduled to be launched by 2022: in all segments from smart to large SUVs. Ten billion euros will be invested in the expansion of the electric fleet in the next few years. The new electric vehicles will be produced within the global, highly flexible and efficient production network of Mercedes-Benz Cars with plants on four continents. The first EQ series model will roll off the line at the Mercedes-Benz plant in Bremen at the end of the decade. In addition to that, luxury-class EQ models will be produced at the plant in Sindelfingen. The company assumes that the proportion of electric vehicles in the total unit sales of Mercedes-Benz will be between 15 and 25 percent by 2025. In addition to traction batteries, ACCUMOTIVE will produce batteries for Mercedes-Benz energy storage units and 48-volt-systems. The pioneering 48-volt on-board power supply is celebrating its premiere in the new generation of the S-Class and will be gradually introduced in various model series.

Daimler’s commercial vehicle divisions are also consistently driving forward the electrification of their portfolio. After the Vito E-CELL from the year 2011, Mercedes-Benz Vans will go into series with electric transporters beginning next year. Both Vito and Sprinter will be equipped with drive batteries from Kamenz. Daimler Trucks will launch a small series of the Fuso eCanter later this year. This is the third generation of the world’s first purely electrically-driven light truck. Fuso also uses the batteries from Kamenz for the eCanter. Depending on the design, load and application profile, the 7.5-tonne truck has a range of more than 100 km without stationary loading. The Fuso eCanter will be delivered in small series from 2017 onwards. The first 150 units go to customers in Japan, Europe and the US. Mercedes-Benz Trucks is also starting the customer testing of the Urban eTruck, the world’s first full-electric heavy-duty truck. Daimler Buses is launching a full-electric Mercedes-Benz city bus in series production next year. Prototypes are already on the road.

CASE – these letters will shape the future of Mercedes-Benz Cars. They stand for the strategic pillars of connectivity (Connected), autonomous driving (Autonomous), flexible use (Shared & Services) and electric drive systems (Electric), which will be intelligently combined by the company. Already today, Mercedes-Benz Cars plays a leading role in all four areas. All activities in the area of connectivity are focused on the digital brand Mercedes me, which gives customers access to an extensive and personalized range of services by app, website or straight from their car. On the way to autonomous driving, Mercedes Benz has for years been a key driver of development and has repeatedly set the benchmark. To this end, the Mercedes engineers use so-called sensor fusion. The data from different sensors, such as cameras, ultrasound and radar, are intelligently combined and analyzed. With car2go the inventor of the automobile is also a pioneer when it comes to sharing. With around two million users, the company is today the world’s biggest provider of free-floating car-sharing. As far as the electrification of the powertrain is concerned, Mercedes Benz is pursuing an integrated approach. Under the EQ brand, it is developing an ecosystem including not just the actual vehicle, but also a comprehensive offer around electric mobility. This extends from intelligent services to energy storage units for private and commercial customers as well as charging technologies, such as inductive charging, to sustainable recycling. To enable all four pillars to develop its full effectiveness, the relevant activities are being brought together in an independent entity.

The company Deutsche Accumotive GmbH & Co. KG, founded in 2009, is a wholly-owned subsidiary of Daimler AG. The company develops and produces highly complex drive batteries for hybrid and electric vehicles based on lithium-ion technology for passenger cars of the brands Mercedes-Benz and smart. The company is also responsible for producing energy storage units of Mercedes-Benz Energy GmbH. The company headquarters of ACCUMOTIVE are located in Nabern in the Stuttgart area, housing research and development. The production takes place in the Saxon city of Kamenz. The Daimler subsidiary employs about 500 employees. The ACCUMOTIVE is closely connected to its affiliate Mercedes-Benz Energy GmbH in Kamenz, responsible for the development and worldwide sales of Mercedes-Benz energy storage units for private and industrial applications