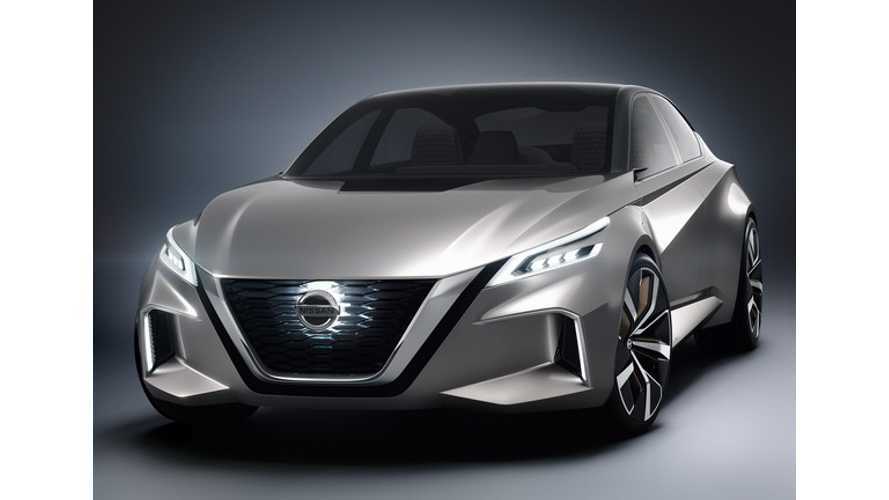 While the next-generation LEAF is scheduled for its debut this September, Nissan has already tasked designers to explore new concepts, that could ultimately become production EVs.

One of the upcoming models is the Vmotion 3.0 concept, that according to a Nissan exec could foreshadow an all-electric crossover, equipped with autonomous and "on-the-go" connectivity technology.

In such a set-up, the new LEAF powertrain and battery (~60 kWh) would be then natural choice for use in the CUV, which fits with Nissan's wider corporate forecast for light trucks to make up 60% of its sales volume in North America.

New Nissan CEO Hiroto Saikawa has already confirmed his company will bring two new all-electric vehicles to market (besides the LEAF 2.0) over the next two years, while recently retired Nissan Chief Engineer Shiro Nakamura further stated the company has plans for a BEV sedan and a utility vehicle.

Earlier this year, Nissan unveiled the Vmotion 2.0 sedan at the NAIAS.

"We are now working on 3.0 for the future direction,"

Vmotion 3.0 will be electric, Aoki said, and designers will take advantage of new body styling opportunities that an electric powertrain allows.

Albaisa said the new V Motion 3.0 is a blueprint for the next generation of electric vehicles.

"Why not try something new?" Albaisa said. "In the future, we're not going to have just one EV. So we're starting to map out what is the DNA that can go across different genres."

"We are clearly focusing our attention on a crossover EV, because it's our DNA," Schillaci said. "The crossover will really embody the latest Nissan Intelligent Mobility features."