The Chevy Bolt is only the first of an upcoming wave of affordable, long-range electric cars that will accelerate the adoption of the segment. 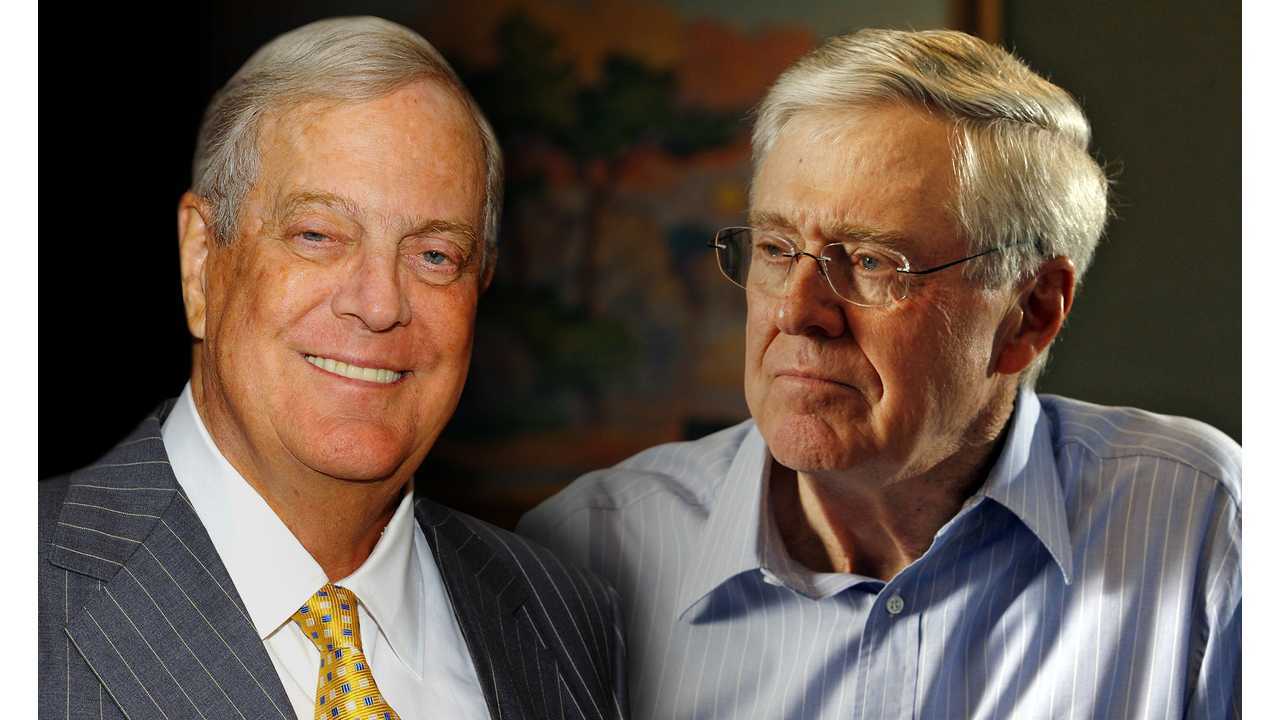 The Koch Brothers are two of the most influential fossil fuel advocates of our time.

It comes as no surprise that, as electric cars begin to catch on at a more steady clip, states are imposing fees to "green-friendly" drivers. The argument is that those drivers aren't purchasing gas, thus not paying the gas tax, and EVs are the reason that gas tax revenue is on the decline.

This information is hardly true, since gas tax revenue has been on the decline since long before electric vehicles started becoming popular. Even today, EVs make up less than one percent of vehicle market share globally, so the impact is intangible. States couldn't pay for road projects long before electric cars. However, oil industry backed groups like the Koch Brothers and American Legislative Exchange Council (ALEC), are making sure that state lawmakers believe that EVs are to blame.

Gas cars today are much more efficient than they once were, and most states haven't raised the gas tax in ages. It is not set today to cover the massive inflation that has taken hold since the gas tax was introduced in 1957. The money coming in only covers about 40 percent of project costs, and there is no way that the 60 percent loss is caused by a few electric vehicles. But, states are looking for a way to make up the gap, and charging fees to EV owners is part of many states' plans.

Just this year, Montana, Indiana, Kansas, South Carolina, New Hampshire, and Tennessee, have added a fee of up to $180 per year. Idaho, Colorado, Wyoming, Washington, Virginia, Nebraska, North Carolina, Missouri, Georgia, and Michigan already have fees ranging from $50 to $300 annually. Arkansas and Arizona are working on setting fees in place.

Georgia has seen the impact of its fees. The state had the second highest EV sales in the U.S. prior to the fee. At that time, Georgia offered an EV rebate of up to $5,000. Now the rebate is gone and there is a yearly $200 fee. EV adoption has dropped by 80 percent.

Sierra Club reported that Koch Industries has spent about $10 million to advocate against electric cars, and to promote petroleum-based fuels. ALEC, which is funded by the Kochs, is working to convince states to drop EV incentives and charge drivers of electric cars. The campaign was started since the organization sees electric vehicles as a potential threat to the oil industry ... not because road infrastructure needs to be paid for by EV owners. It really has little to do with bringing increased revenue to states, but instead, to get people to stop buying EVs.

There are surely other alternatives, that don't intentionally benefit Big Oil, to help states generate the needed revenue. Some states are looking at taxes based on miles traveled. Others are considering setting up programs in such a way that those driving ICE vehicles will get a break, or at least not be penalized (because let's face it - many people don't and won't have an EV for a long time and they shouldn't be crucified either), but EV adopters will also not be steered away from the environmentally-friendly vehicles. Additional options include a carbon tax, and/or taxes based on vehicle weight.

It is only fair to argue for a more level playing field. Some will argue that EVs should not be incentivized, although the grounds for such is pushing a product that is a more positive impact on the environment and our health. We won't get into whether or not oil has seen incentives in the past. But, at the very least, drivers of electric cars should not be punished for making a positive choice.