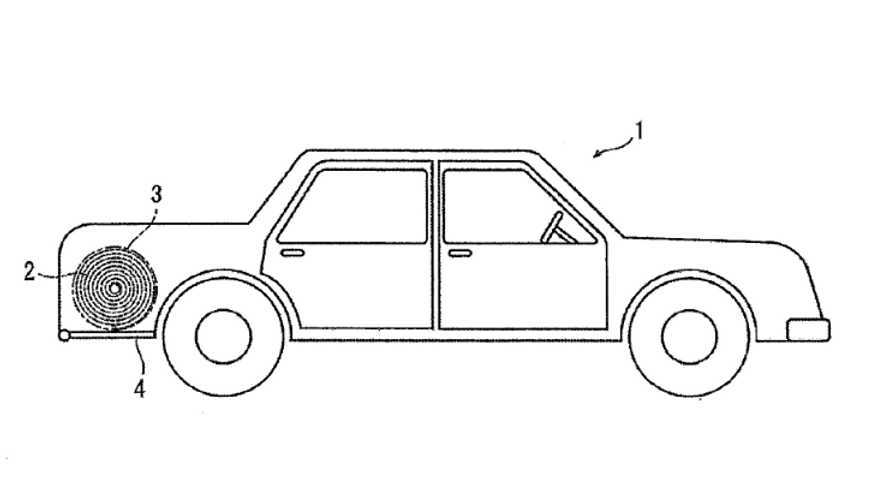 Keep up your EV's solar panel rolled up in the trunk

What this might mean: You know those people who put a reflective sun shield in their window to try and keep the cabin cool while the car is parked? If you're one of them, then you'll love a new idea for solar power charging your electric vehicle from the Disco Corporation out of Japan. Basically, when you want to get some solar energy into your EV's battery, you simply open the trunk, unroll a solar sheet, and put it in a sunny space with a cord connected to the car. As the patent says, since the sheet can be big, "compared with the case of mounting a solar panel on the roof or hood of the vehicle body, larger electric power can be obtained." What's most bizarre about this patent, though, is the idea that you might have the charging sheet dragging behind you as you go down the road. To wit: "the sheet-shaped solar battery is spread on the back side of the electric vehicle so as to come into contact with a road surface." Maybe Disco should talk to Toyota about its sun-following nav system.

Ford wants to charge your EV ... and your electric bike

What this might mean: Storing your electric bike in your electric car, and having both charge at the same time when the EV is plugged in is a really cool idea. Ford has taken this one step further to have the nav system tell you, "hey, park here and bike the rest of the way because traffic is a bear," is an even cooler idea. Letting the EV battery throw some electrons into the bike's battery while you're driving down the road, if need be, just puts the cherry on top.

Yokohama puts a little wind turbine inside your tire

What this might mean: Just look at that patent image for a minute. While I assume that Yokohama isn't actually going to put a miniature wind turbine – one shaped like the big ones you see in fields or on the water sometimes – into your tire, the image above is precious. Somehow, Yokohama thinks that it makes sense to try and capture some of the kinetic energy of the car moving down the road with a little turbine hidden in your tire. Yokohama is thinking about EVs with this concept, of course, saying that,  the energy from the turbine could go to a "rechargeable battery that stores electric power," but the patent is frustratingly vague about how efficient or practical something like this could be. Then again, that's kind of the point of a patent filing, to capture an idea for the future.