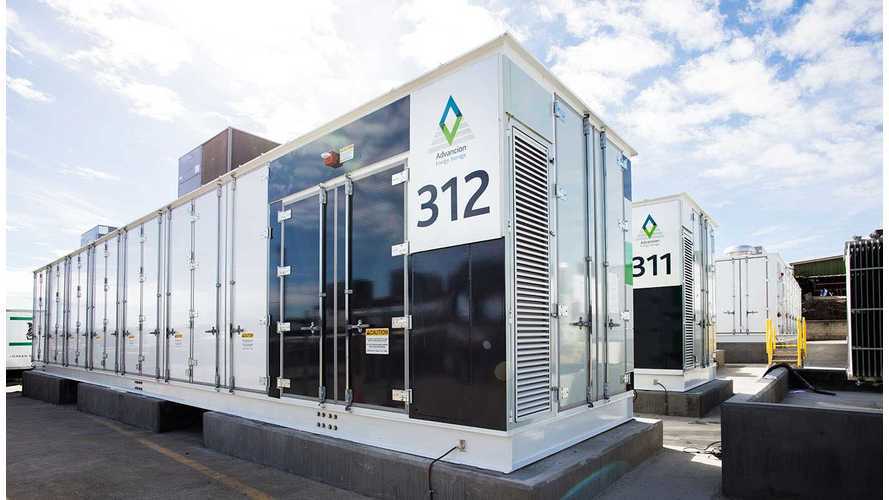 AES Energy Storage has just launched a system that's 50 percent larger - 120 MWh/30 MW -  for San Diego Gas & Electric in Escondido, California.  How long will it be before Tesla retorts?

"Today, SDG&E is showcasing the world's largest lithium-ion battery energy storage facility in partnership with AES Energy Storage, which will enhance regional energy reliability while maximizing renewable energy use.  The 30 megawatt (MW) energy storage facility is capable of storing up to 120 megawatt hours of energy, the energy equivalent of serving 20,000 customers for four hours.

"The 400,000 batteries, similar to those in electric vehicles, were installed in nearly 20,000 modules and placed in 24 containers.  The batteries will act like a sponge, soaking up and storing energy when it is abundant – when the sun is shining, the wind is blowing and energy use is low – and releasing it when energy resources are in high demand.  This will provide reliable energy when customers need it most, and maximize the use of renewable resources such as solar and wind."

According to the press release, SDG&E expects to develop or interconnect more than 330 MWs of energy storage on the system by 2030.

For Samsung SDI, 120 of MWh battery is equivalent to the installed capacity in more than 3,600 BMW i3s with 33.2 kWh packs (or about equivalent to six months of i3 sales in the U.S.).