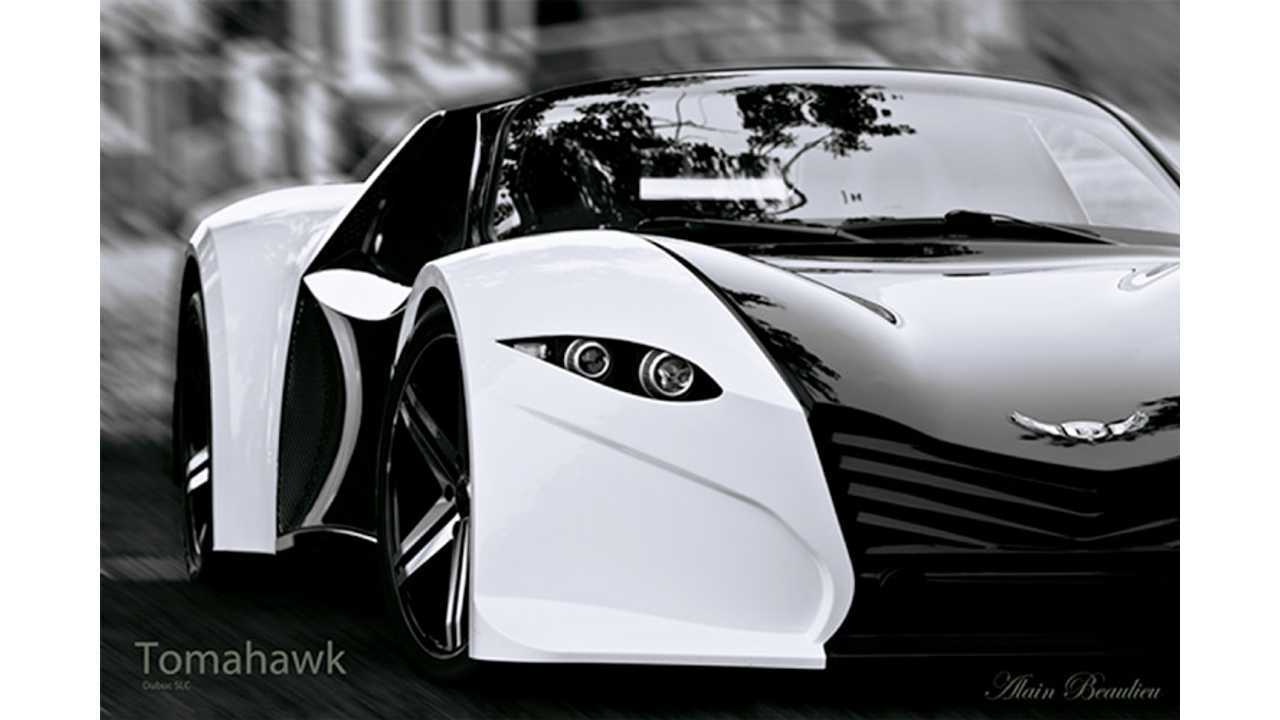 Dubuc Motors is aiming for a $125,000 USD price tag for the Tomahawk, and interested early adopters can already put down a $5,000 refundable deposit.

Quebec City-based start-up Dubuc Motors has been researching and developing vehicles for over a decade in a self-funded space. Now, the company is looking toward crowdfunding to get its extremely fun-looking 2+2 electric vehicle, codenamed the Tomahawk, into production.

Dubuc Motors has officially started taking investments - from as low as $200 USD - in return for a stake in the company. It's hoping to garner $25 million through crowdfunding, and according to Dubuc Motors, it's already raised over $6 million in reserved investments. The hope is to have a production version of the Tomahawk ready to show at the 2018 Consumer Electronics Show, which is set to take place in Las Vegas in January of next year.

With the money raised, Dubuc Motors wants to bring its employee count from the current dozen to around 60. It will use the cash to complete crash tests, safety certifications, and licensing, and with government grants, it's looking at outfitting a 200,000 square-foot factory.

Similar to Tesla, the Tomahawk will be sold online and the company says it will use traditional advertising budget, bloggers, and social media to attract prospective buyers.

Dubuc Motors is aiming for a $125,000 USD price tag for the Tomahawk, and interested early adopters can already put down a $5,000 refundable deposit. Production numbers for the first year are very modest, with the company looking at anywhere from 10 to 100 vehicles being produced. That could eventual grow to 1,500 vehicles per year, though.

While there are a lot of question marks involved with this type of venture - the biggest being will they be able to hit the $25M mark - the company has offered plenty of info to whet the appetites of possible investors.

In terms of straight-up specs, the Tomahawk will incorporate twin front and rear motors, with electric all-wheel drive. It will have a 370 mile (595 kilometre) range, will be able to accelerate from 0-60 miles per hour (0-96 kilometres per hour) in three seconds, and will have a 160 mph (257 km/h) top speed.

It features scissor-doors, and looks like it will have many of the amenities you'd expect in a vehicle starting in the six digits, from a panoramic roof and integrated WiFi, to hands-free voice commands and traction/stability control. The interior gets the carbon fibre treatment, along with what the company describes as the "highest premium components."

The company has said it doesn't consider itself a competitor to any of Tesla's models, but on its website, it describes the Tomahawk as "Tesla's cousin," filling in a sports car gap that Tesla doesn't currently fill, but reportedly will again one day.

As with any Canadian car company, we're eager to see if Dubuc Motors will find success in the niche market it's selling to. With the performance numbers the company is touting for the Tomahawk, we're certain car fans from around the world are also plenty eager to see what comes of the coupe.