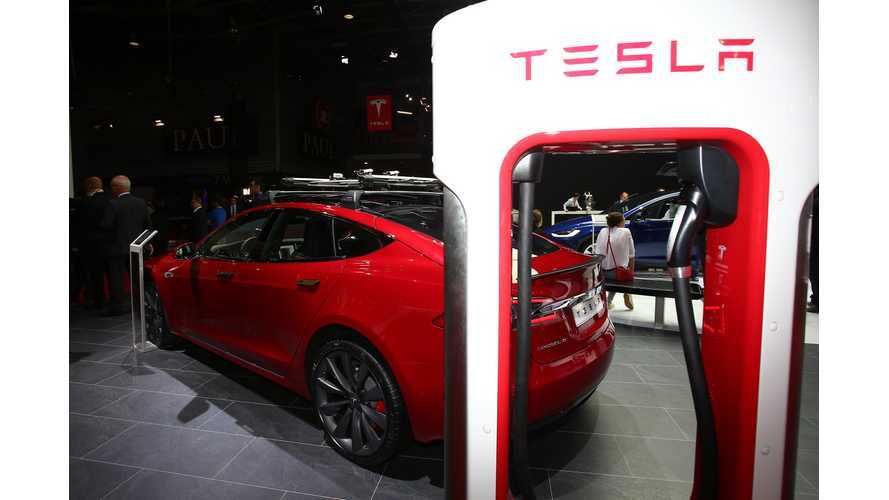 Interest in Tesla's Q4 numbers only surpassed by thirst for upcoming Model 3 news!

After the market closed on Wednesday Tesla released its Q4 2016 earnings, and gave an operational update on all things Tesla. But most importantly, on the Tesla Model 3!

Tesla debuted the Model 3 almost a year ago, saying production could start as early as this July...but since then, not-so-much with the updates

Heading into the report, the street expected the company to lose 53 cents per share on revenue of $2.12 billion.  Given that the company already pre-estimated Model S and Model X sales a month and a half ago, there wasn't any major surprises.

With that said, the company beat street estimates on the revenue side - logging $2.28 billion, while the earnings per share came in light, with Tesla reporting a loss of 78 cents.

Interestingly, heading into the report almost no one cared about this month's quarterly financials, instead all eyes were on the upcoming Tesla Model 3, and would the company finally offer some news by way of progress?  And they certainly did, stating:

"Model 3 on track for initial production in July, volume production by September"

Fremont to be a very busy place starting in Q4 of this year!

Not only did Tesla provide confirmation on the Model 3 timelines, but put specific targets on what they were looking to hit:

With this disclosure in mind, and how Tesla has operated in the past, we can approximate that Tesla (provided they stay on track) will likely build about 25,000-35,000 Model 3s in 2017; which is perhaps not the optimistic 100,000 that was thrown about by CEO Elon Musk as a potential volume number, but still pretty decent nonetheless.

Conference call update:  As we expected, the production estimates for the quarters are to start slow and then build up (as opposed to being more linear), with CEO Elon Musk saying that Tesla wants to be the best manufacturer on the planet, and forsees a "S curve" to Model 3 production ramp, with the starting volume to be low as the company irons out initial issues.

Tesla noted that all their supply chains and manufacturing are well on their way to "support volume deliveries" in the second half of this year, and the company also confirmed earlier reports the first Model 3 prototypes were built earlier this month.

"Initial crash test results have been positive, and all Model 3-related sourcing is on plan to support the start of production in July. Installation of Model 3 manufacturing equipment is underway in Fremont."

Unfortunately, the company didn't put a date on showing off those production-intent models to the public, or any pricing information.

Conference call update: CEO Elon Musk again notes the first Model 3s go to Tesla employees and investors, but the CEO says he expects customers to be able to start configuring their cars in "3 to 4 months".

Conference call update 2: CFO Wheeler is asked about the Tesla Model 3 order/reservation status. No definitely answer is given, other than Tesla is in "great shape".

Conference call update:  Tesla CEO Elon Musk again reiterates that the Model 3 is a more basic car to build than that of the Model S & X, cites the fact the Model 3 will only have "one screen instead of two", less internal wiring...and humorously, no falcon-wing doors.

Cost of operations heading into production?

"We expect to invest between $2 billion and $2.5 billion in capital expenditures ahead of the start of Model 3 production."

With only about $3.4 billion on hand, and not likely to turn a profit anytime soon, one can expect another round of capital raising is likely imminent.

Conference call update: Further to the expectation that Tesla will need more cash, on the call Musk says no capital is needed for Model 3 ramp, however the CEO notes that will leave Tesla close to a point where it would soon need to, and therefore it "probably makes sense to raise capital to reduce risk".

So yeah, 1+1=2, and one should likely expect more fundraising to occur pretty soon.

Tesla tightened up its early Q4 estimate for sales on the Model S and Model X, noting it sold 22,253; meaning that full year sales of its two models ended up at 76,230 - missing earlier guidance of 80,000 units to be moved.

Interestingly, and for the first time ever, Tesla did not give full year sales guidance for 2017, perhaps unwilling (or not comfortable) with putting a number on the Model 3, instead we got half-year guidance ahead of the 3.

Tesla did later comment on the lack of full year guidance:

"...since even a couple week shift in timing could have a meaningful impact on total deliveries and installs, we are focusing our guidance on the first half of the year."

Consensus with analysts ahead of the report was for about 110,000-115,000 - which actually still seems fairly likely, as one assume their will be some pause/hiccup in Model S/X production as the new Model 3 comes online.

On the demand side, Tesla noted:

"In Q4, we received 49% more global net orders for Model S and X combined, compared to the same period in 2015, as both vehicles continue to win over new customers."

On the financial side of things, automotive gross margin was 22.6%, up from 19.7% a year ago.  With more Model X sales in the mix, the average transaction price per vehicle was up about $1,000 in Q4.

A hot topic of late has been Tesla's ability to service its offerings, as the pace of new service centers, and even Supercharging stations has been lagging the sales, something Tesla notes it has been improving in this area of late, but promises to add more infrastructure still.

"To support accelerating vehicle deliveries and maintain our industry-leading customer satisfaction, we are expanding our retail, Supercharger, and service functions."

Here is a quick look at the sales and infrastructure metrics from the last year:

Tesla noted that it expects to "reduce the global average wait time for vehicle service to less than one day by the end of the first quarter of 2017."

"Ahead of the Model 3 launch, we are reengineering and expanding our operations as we anticipate the needs of a much larger family of Tesla owners. In service, since more than 80% of our repairs are so minor that they can be done remotely, we are expanding our mobile repair service that allows Tesla to make vehicle repairs at an owner’s home or office."

Find there just aren't enough Supercharging locations and/or stalls? If you live in North America, Tesla has some great news for you!

Pretty much underlining the fact that all the Tesla Model 3 deliveries will be kicking off in North America, Tesla said they will be putting its emphasis on expanding the Supercharger footprint in the US and Canada during 2017.

"We plan to accelerate expansion of the Supercharger network this year, starting with doubling our number of North American Supercharger locations in 2017."

Tesla Solar Roof production confirmed for 2017...but that was about it

With the recent acquisition of Solar Energy, and the recent start of new battery production (2170 format) at the company's Nevada Gigafactory, a lot of attention is also on Tesla's solar and energy storage products.

Q4 deployment was as follows:

Tesla also briefly touched on its new "solar roof" product, but really didn't get into specifics, other than to confirm the partnership with Panasonic to build then, and that it would happen at its Buffalo, NY facility at some point this year.

As it relates to Tesla's Gigafactory in Nevada the company didn't offer specific numbers on the build-out progress, but did offer some news on future factories, and also confirmed that the installation of Model 3 manufacturing equipment is happening now.

"Later this year, we expect to finalize locations for Gigafactories 3, 4 and possibly 5 (Gigafactory 2 is the Tesla solar plant in New York)."

How did shares react to Q4 earnings and Model 3 news?  Tesla traded up around $9 (3%) after the news was released, but mid-day trade the next day saw a drop of about$17  (6%), as investors digested the short-term impacts of the latest quarter's release to the bottom line.  A real-time quote can be found here.