Study: EV Charging Infrastructure Market Will Be Worth $46 Billion In 2025 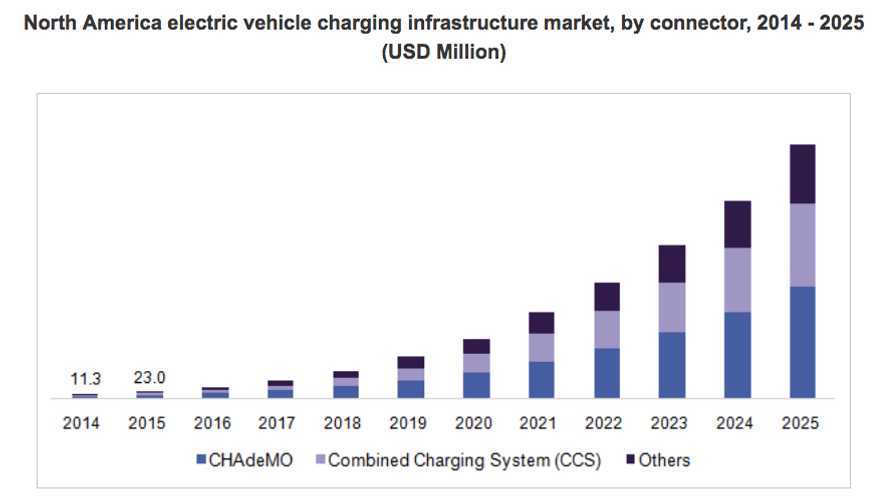 That should be enough to handle all the EVs we're gonna drive.

If Grand View Research is correct, then electric vehicle fans have nothing to worry about. That's because one of the backbones of the EV industry – the global charging infrastructure market – is going to grow exponentially from its size in 2016 ($1.16 billion) to over $45.59 billion by 2025. In fact, Grand View Research (GVR) says that there will soon be, "aggressive growth of EV charging infrastructure." We're not going to need that many more EVSE units if the cars aren't going to be purchased and driven, right?

One of the aspect that GVR focuses on in the new report – officially titled "Electric Vehicle (EV) Charging Infrastructure Market Analysis By Charger Type (Slow Charger, Fast Charger), By Connector (CHAdeMO, Combined Charging System), By Application, By Region, And Segment Forecasts, 2014 - 2025" – is how many DC fast chargers it expects will be installed in the coming years. Unsurprisingly, GVR things that the SAE Combo (CCS) system will overtake the current DC Fast Charging leader, CHAdeMO, at some point in the near future. To get the details of when this will happen, we'd have to pony up thousands of dollars for the full report, but the graphic above makes it look like it'll happen some time after 2025 in the U.S.

The GVR report also looks at AC fast charging, which is something we don't hear too much about. These chargers are capable of outputs of up to 43kW, so they can't quite touch the 300kW speeds of some of the more powerful DC fast chargers. As you can probably guess, GVR expects governments and the automakers themselves (think Tesla) to lead the charge for more public EV chargers.

For a random comparison, GVR also released a report today that says that the "Microwave Devices Market" will reach $11.86 billion in 2024. The more you know.