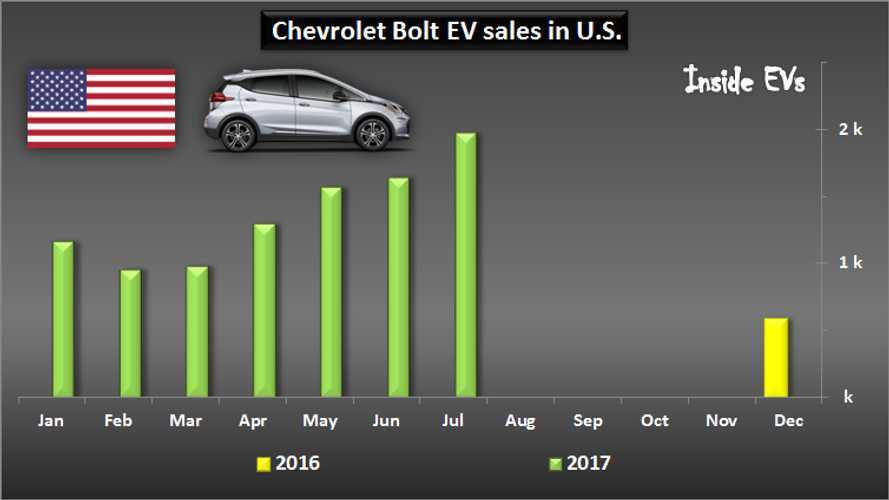 The U.S. automotive market of late has entered the dangerous area of decreasing sales, notching a large 7% drop year-over-year in July. In such a circumstance, any growth of plug-in vehicle sales will show an improved market share, even more so with gains.

And sure enough, in July some 15,607 plug-ins were delivered, good for a sturdy 19.4% increase in the sector - the 22nd consecutive month of gains.

Through 7 months, the full year counter for electric vehicles has moved into 6 digits, with ~104,863 sold thus far - up 35% year-over-year. See the full July sales report here.

The gains for plug-ins, and the worsening overall automotive segment in the US, meant the electric market share rose to roughly 1.1%.

We should also note this is the first time in US history that plug-in sales have exceeded 1% market share for three consecutive months (see chart below).

For the month, the best selling EV, for the very first time, was the Chevrolet Bolt EV with 1,971 units moved, about 300 units ahead of the Tesla Model X, estimated at 1,650 deliveries.

Of course in the "newcomer category", all eyes were on the Tesla Model 3 (view launch party/full specs here), although surprisingly, the Honda Clarity Electric also went on sale and bested the Tesla in deliveries 34 to 30 ... but, we suspect it won't stay ahead in that sales race for very long.

Given the second half of the year sales gains normally seen with plug-in vehicles, the addition of the Model 3 in volume, increased Toyota Prius Prime inventory, the Chevy Bolt EV being made available nationwide this month, and the new LEAF's introduction in December,  we suspect the US market will easily be crossing the 2% mark by year's end.

Check out all the individual sales for every plug-in model sold in July (and all-time) on our Monthly Plug-In Sales Scorecard.