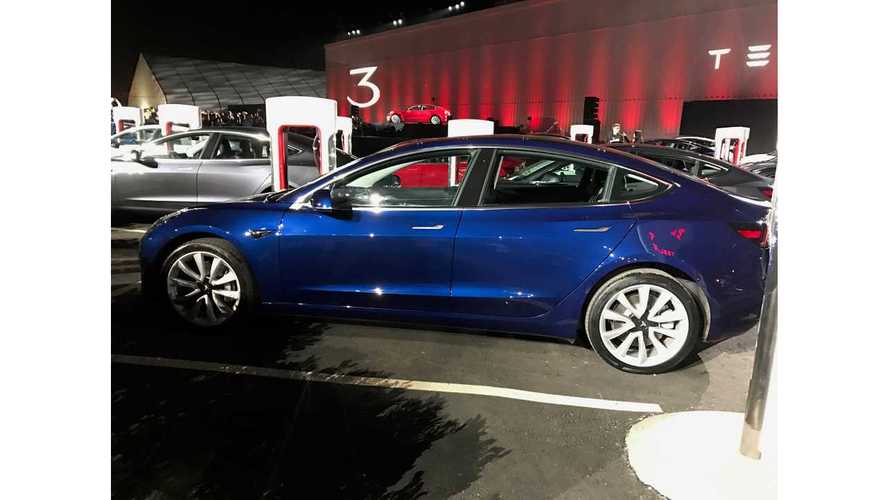 Tesla Model 3 at the handover event

We finally have a clear-cut, Tesla-official representation of the Model 3 S-Curve that CEO Elon Musk keeps mentioning (or not).

Most of us are aware that Tesla Model 3 production aims to ramp up according to an S-Curve. Many publications have made an attempt to sort out all of Musk's different comments, to draw up an estimated S-Curve, but we've still yet to see one from Tesla.

On July 29, the company changed that. Tesla Tweeted the Model 3 production ramp S-Curve in an attempt to clear everything up. As you can see below, the nice visual shows Model 3 production in "cars produced over time." It's just like the x, y graphs we used to do in school.

However, we also know that Tesla doesn't like to reveal what it's not ready to reveal. The company is notorious for cliff hangers, multiple reveals, hints, and "huge" late-night announcements that sometimes turn out to huge, and other times not so much.

This is not necessarily a bad thing. C'mon, it's part of the Tesla appeal. It keeps people coming back and checking social media. However, at times like this, it not only leaves us wondering, but also leaves us laughing out loud.

The handy dandy chart is missing a key component, which would make it really useful and informative. As usual, we are speculating as to what the chart is telling us. The concept is exactly as stated ... it's an S-Curve, and that's all we know (we already knew that).

Where are the numbers Tesla?

Perusing the Twitter replies is sure to make you laugh. The first commenter writes:

"Nice graph. What's the scale in either axis"

"15 cars produced by the end of Time, obviously"

All humor aside, however, a few of the Tweeters actually figured out the method to Tesla's madness:

"Clearly they will be ramping up production to make as many as 15 cars per time in just six times!"

"Not entirely useless -- you can see they went from producing 1 car (per period on time equal to 1 car length) all the way up to 15!"

But for real now, Tesla has made it clear that as it slowly ramps up production, adjustments will be made to allow for better efficiency. Musk stated during the recent Q2 earnings call (via Teslarati):

“Model 3 drive units as well as battery packs made with our proprietary 2170 form factor cells are being built on new lines at Gigafactory 1. We are now fine-tuning these manufacturing lines to significantly increase the production rate. We wish we could do all of this faster and get everyone’s Model 3 to them right away. It’s important to understand that our production ramp will follow an S-Curve, meaning that it will begin slowly, grow exponentially, then start to tail off once we achieve full production.”

The "production hell" that Musk recently referred to insists that the company must remain patient and calculated as it moves forward. Some may think of the "production hell" as the part where the automaker has to crank out a half-million vehicles in record time. That's not really the hardest part. It's the tedious process at the beginning that's much more difficult, as well as much more critical to the grand scheme of the operation.