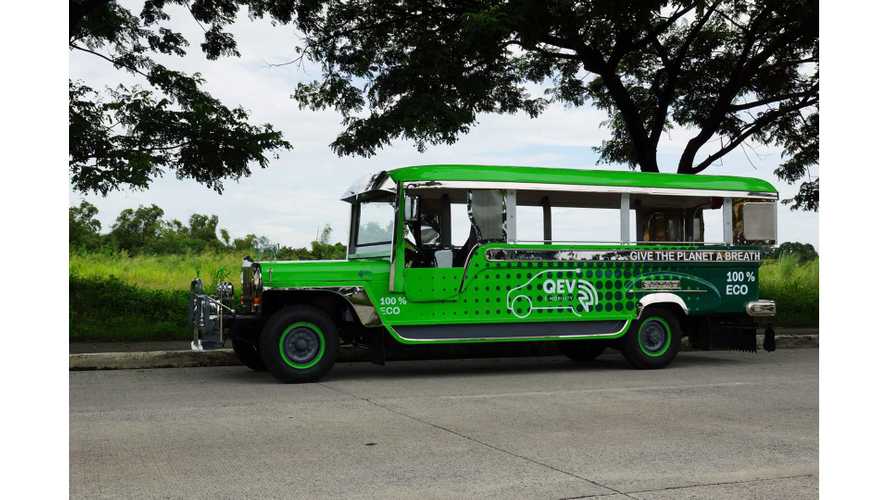 Is there anything quite as iconic in public transportation as the jeepneys that roam the roads throughout the Philippines? Ok, sure, London has its black cabs and, we suppose, its double-decker buses. Still, nothing marries timelessness and transport with a joie de vivre quite like these eccentric people movers that first arose from the carcasses of  American army Jeeps after WWII.

Now, one of the main drawbacks of these beasts of burden may be addressed by a program that would see 50,000 of them have their soot-spewing diesel motors replaced by electric drivetrains over the next five years. QEV Philippines Electromobility Solutions and Consulting Group has unveiled the first example of its "green jeepney" in a ceremony attended by a number of government officials and business partners, and presented its plan to improve the air quality in Metro Manila.

The idea isn't a new one. But, while there are ventures that have approached the electric jeepney from various angles in the past, this one differentiates itself in both scale and engineering. You see, the guys involved with designing the retrofit kit — Campos Racing — have already had a hand in other successful high-profile ventures.  They helped develop the Arcfox-7, an electric supercar by Chinese outfit BAIC, which was first revealed last year. They also managed the Mahindra entries in the Formula E this past season, and work with racing teams in other non-electric series, like Formula 2 and the FIA World Touring Car Championship (WTCC). So, pretty legit.

Technical details of the drivetrain are scarce, but we understand that its lithium ion battery has enough juice for 80 to 140 km (50 to 87 miles), depending on load and conditions. Fast charging stations will be installed by the new "Cleanergy" network that can boost the batteries from 20% up to 80% in a mere 15 minutes. The conversion work will be handled by Sarao Motors, a company that can also build the electric jeepney from scratch.

QEV says that among other environmental improvements, the fleet will reduce consumption of 375 million liters (99 million US gallons) of oil a year, or about 3% of imported Brent crude. Considering it's just one project in one of the country's many cities, that's pretty impressive.

Often, ventures such as these in the far-flung corners of the world escape our eye, but lucky for us, German ex-pat Frank Schuengel sent word after having the chance to get up close and personal with the vehicle and take pictures (which he has generously shared with us), as well as talk with some of the people involved with the project. He even got to take it for a spin, video of which you can find below where it keeps company with a complete gallery and the official press release with even more details.

The QEV Philippines' green jeepney was unveiled at a ceremony last July 20 at the Shangri-La at The Fort in Bonifacio Global City, Taguig City.

QEV Philippines, the Philippine unit of Singapore-based electromobility holding firm QEV Capital Pte. Ltd. and a joint-venture between Philippine and Spanish businessmen Endika Aboitiz and Enrique Bañuelos, is proposing the conversion of an initial 50,000 jeepneys over five years (10,000 jeepneys per year) by replacing their diesel engines with lithium-ion batteries. If the proposal is adopted, electrification/reconversion will be undertaken by QEV Philippines affiliate QEV Technologies and local jeepney manufacturers such as Sarao Motors in four local facilities. Charging stations—to be powered by AboitizPower’s clean and renewable energy brand “Cleanergy” whose network will be initially formed with the help of Meralco, Shell, Ayala, SM—will be provided by QEV Philippines.

“The jeepney is as much Filipino as all of you. It is like London’s double-decker bus, it in itself is a moving museum. Taking the jeepney away is taking away a piece of our colorful history, an icon that many have come to associate with the Philippines. We can preserve the jeepney and modernize it without taking away its charm,” Aboitiz told those present.

Further, this will come at no cost to jeepney drivers, with as much as $800 (or approximately P40,000) a year seen in energy and maintenance savings. The green jeepneys’ charging stations are also expected to help save 375 million liters of oil per year, or the equivalent of 3% of the country’s total imported Brent Crude barrels.

“What we propose is not replacement, but rehabilitation. Rehabilitate old jeepneys and make them like new, complete with electrical motors that will make it run on electricity instead of diesel.  Help drivers pay for the rehabilitation, through a special program that the Philippine government will make out for them—and in the end put more money in their pockets because the costs of charging with electricity would be so much cheaper than filling it up with diesel,” Bañuelos noted.