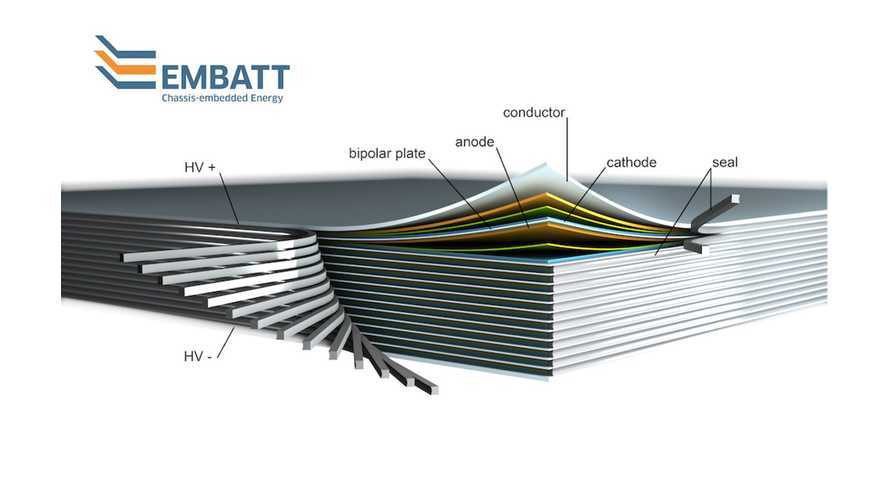 Doubling the energy density, and thus range of the state-of-the-art electric vehicles to some 620 miles (1,000 km) is the stated goal of Mobile Energy Storage Systems out of Fraunhofer-Gesellschaft in Dresden, Germany.

Project Manager Mareike Wolter, presented the battery concept that, in theory, would enable a Tesla Model S to travel up to 1,000 km instead of current 540 km (335 miles - 100D), using the same battery pack footprint.

The solution apparently is a completely new battery design that wouldn't any waste space on inactive components in the system.

"To do so, they got rid of the housings that encase individual batteries and turned to a thin, sheet-like design instead of a cylinder. Their metallic sheet is coated with an energy-storage material made from powdered ceramic mixed with a polymer binder. One side serves as the cathode, and other side serves as the anode.

The researchers stacked several of these so-called bipolar electrodes one on top of the other, like sheets of paper in a ream, separating the electrodes by thin layers of electrolyte and a material that prevents electrical charges from shorting out the whole system.

The "ream" is sealed within a package measuring about 10 square feet (1square meter), and contacts on the top and bottom connect to the car's electrical system.

The goal is to build a battery system that fits in the same space as the one used by Tesla's vehicles or other electric vehicles, the researchers said.

"We can put more electrodes storing the energy in the same space," Wolter said."

German researchers reportedly have been working on the project for about three years, and apparently will be ready with a test prototype by 2020.

It is definitely a novel idea, but the ~6 year timeline to just get to a prototype shows there are some serious issues to making the concept a reality; and as always, the price per kWh is a main deciding factor in mass adoption.