Will The Tesla Model 3 Be On Schedule? Perhaps Ahead Of Schedule? 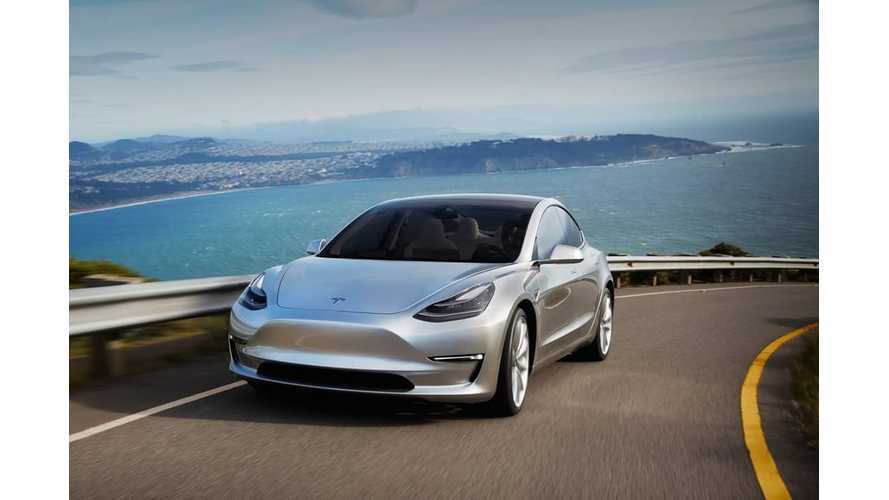 SPY VIDEO: TESLA COULD BE HINTING THE MODEL 3 IS COMING FASTER THAN EXPECTED

As Tesla is scheduled to report its fourth quarter earnings next week, all eyes (and ears) will be on the Model 3. Marketwatch* reports that, "Wall Street will be eager to hear details on the Tesla Model 3, the all-electric mass-market car that Chief Executive Elon Musk hopes to start producing in July and selling later this year." Ben Kallo, an analyst with Baird, who had picked Tesla as his top stock for 2017 agrees: "That’s where all eyes are now."

It's reported that, "The Silicon Valley electric-car maker has promised to ramp up production to a rate of half a million vehicles in 2018, an ambitious goal that largely hinges on success of the Model 3. Hopes for the Model 3 and any updates on the car’s production schedule are partly the reason Tesla stock has been on a tear... Tesla is readying test Model 3 sedans ahead of the earnings report, according to a report earlier this month that cited anonymous sources. Wall Street is hoping to catch a glimpse of the test cars or at the very least hear more from Musk on the production schedule."

The biggest question for the Tesla Model 3 is “when, not if” at this point, Baird’s Kallo said. He added:

"Tesla will make the car and if they are a quarter late, I don’t think it’d matter.” Bill Selesky, an analyst with Argus Research, said he’ll be looking for production-cost estimates for the Model 3. “Everything seems to be going according to plan” regarding the Model 3, but analysts will still want to hear more details about ramp-up expenses, he said.

One hint might come from Tesla's efforts that publicly promote the Model 3. They've been relatively mum on the Model 3. However, Model 3 promotional videos have been popping up in Europe and Canada.

That said, there hasn't been much video footage teasing the Model 3 in U.S. stores — that is, until now.

On Instagram, @ty02ryan posted a glimpse of the Model 3 and Tesla's Gigafactory. The post appears to be video footage taken in the Third Street Promenade's Tesla store in Santa Monica, CA. Another encouraging observation: the video claims a 35% reduction in battery costs. That's higher than the usual 30% that's quoted on Tesla's website and by senior management. Check it out below...

Above: Video footage from the Third Street Promenade's Tesla store in Santa Monica, CA (Source: @ty02ryan / Instagram); note: the youtube video shown above has been reformatted

Elon Musk has said, "When somebody comes into our store to buy a Model 3, we say well why don’t you buy a Model S or an X instead? So we anti-sell the 3." Is Tesla beginning to actively market the Model 3 at their store locations? Could the inclusion of this video in a U.S. store mean the Model 3 could be tracking on-schedule? Hard to say. In any event, customers may be more forgiving on Tesla's timeframe than most expect. Learn Bonds writes that, "Model 3 buyers don’t care about delays." They quote a reader (and Model 3 reservation holder) who explains, "Tesla is the only auto company dedicated to help save the planet and a month here or there. I am a reservation holder and Tesla can take all the time it wants to get it right."