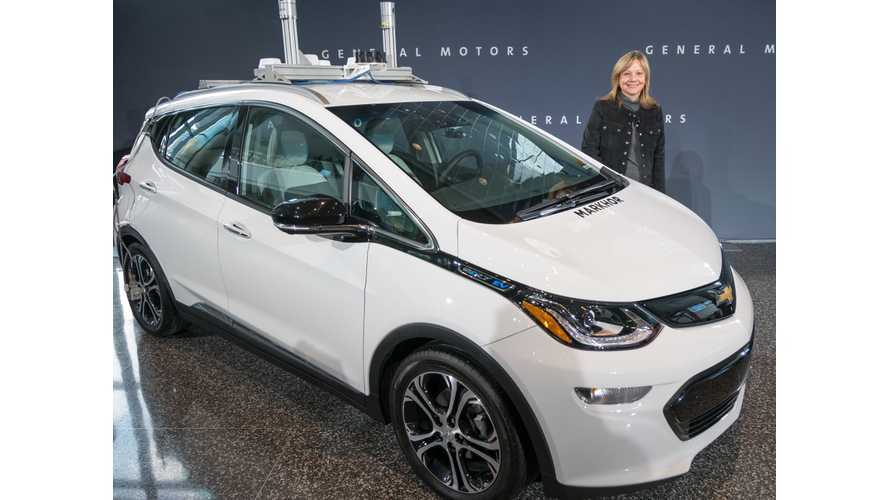 According to Reuters, GM plans to build, test thousands of self-driving Bolts in 2018.

Those vehicles, called Bolt AV (autonomous vehicle) are to be used by ride-sharing Lyft, while there is no plan to sell AVs publicly in near-term:

"It is expected to be the largest such test of fully autonomous vehicles by any major automaker before 2020, when several companies have said they plan to begin building and deploying such vehicles in higher volumes. Alphabet Inc's Waymo subsidiary, in comparison, is currently testing about 60 self-driving prototypes in four states.

Most of the specially equipped versions of the Chevrolet Bolt electric vehicle will be used by San Francisco-based Lyft, which will test them in its ride-sharing fleet in several states, one of the sources said. GM has no immediate plans to sell the Bolt AV to individual customers, according to the source.

The sources spoke only on condition of anonymity because GM has not announced its plans yet."

The cost of early Bolt AVs are estimted at "six figures", so it would need to be a workhorse to pay off.

These automous Bolt AVs are planned for production in early 2017 at GM's Orion, Michigan plant.

"If you assume the cost of these autonomous vehicles, the very early ones, will be six figures, there aren’t very many retail customers that are willing to go out and spend that kind of money," Ableson said. "But even at that sort of cost, with a ride sharing platform, you can build a business."