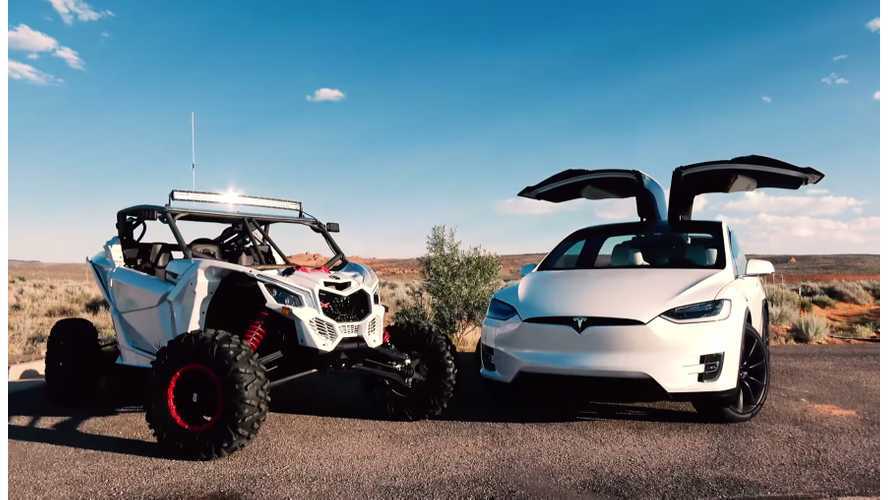 We've seen cars tagged with the Tesla logo race against any number of vehicles before: Detroit muscle, Italian exotics, motorcycles and even a snowmobile. It's always entertaining to see a unique matchup, so we were pretty excited when we stumbled onto this:  a Tesla Model X 100D versus a Can-Am Maverick X3.

On the face of it, the numbers, if reported accurately, would indicate this is actually a bit of a mismatch, with the Can-Am having a significant edge.

In the video it sounds like its owner says the side-by-side accelerates to 60 miles per hour from a stand still in a mere 2.8 seconds. The Model X, even with its recent power bump, is said to only do the deed in about 4.7 seconds. Of course, if this was the performance version of the Tesla — the P100D — the two would be pretty much equals on paper, but from what we can tell, it is not the more expensive X.

While we won't give away the ending, we will say it was much closer than we expected. Hopefully, the two will take their respective vehicles out together again for a rematch, though we'd like to see the contest being held off of public roads (because that's stupid, dangerous, and illegal) and line up in the sand. Tires treaded for traction versus Tesla's traction control should make for an interesting outcome.

Until then, if you haven't watched it yet, scroll up and roll tape!