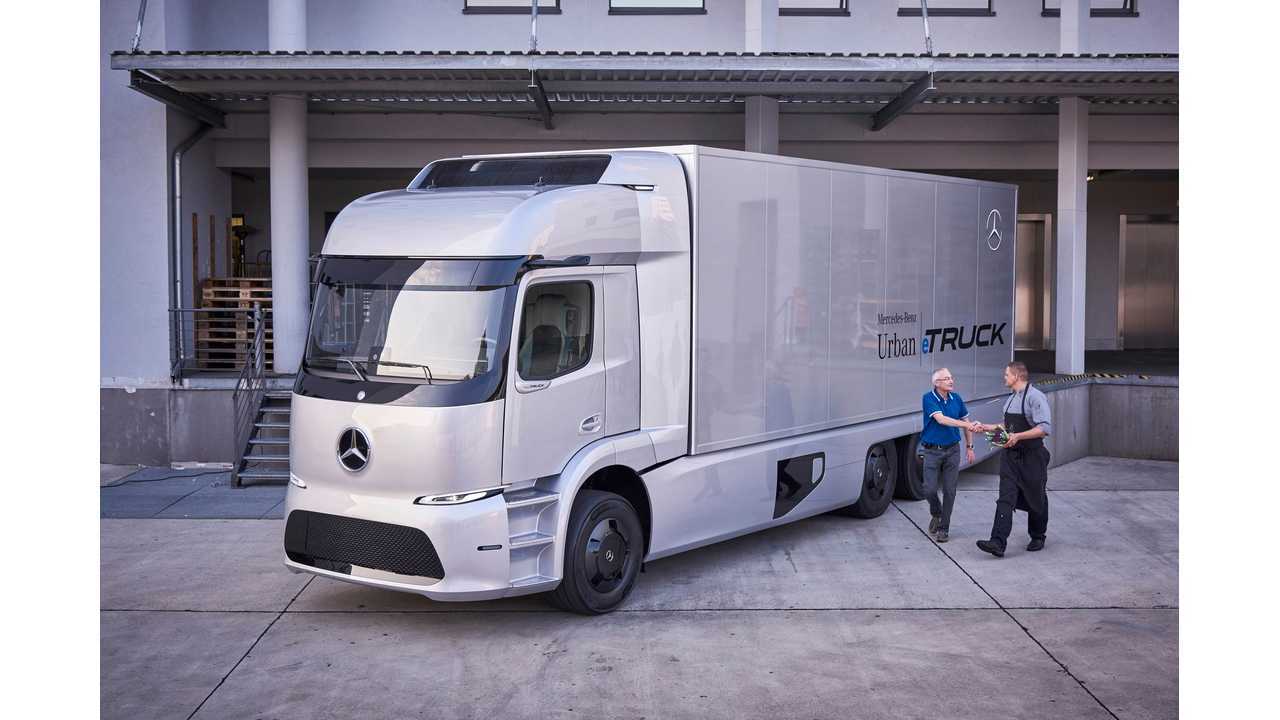 After a fairly high profile and successful debut of the Urban eTruck at the International Commercial Vehicle Show last September,  Mercedes-Benz is now in talks with around 20 potential customers to participate in consumer trial projects in Germany, and to follow later in Europe.

A 'two-digit' number of Urban eTruck will be made for testing over a short-radius for distribution, beginning this year, prior to series production kicking off (hopefully) in the not too distant future.

The Urban eTruck has been rated with 124 miles of all-electric range via a massive 212 kWh pack, while two high-speed asynchronous three-phase electric motors can pump out up to 339 HP and 737 pound-feet of torque.

"This year, Mercedes-Benz Trucks is bringing the world´s first all-electric heavy-duty truck to market in a small series. Following the presentation of the Urban eTruck with 25 t perm. GVW and a range of up to 200 km at the International Commercial Vehicle Show in 2016, the first vehicles will be delivered to customers this year."

"In order to be able to depict the various application possibilities, 18- and 25-tonne models will be equipped with a refrigerated body, as a dry box body and as a platform vehicle. Together with a special charger which takes into account the increased demands on a truck, the vehicles will be handed over to the customers to use for a period of twelve months and supported by Mercedes-Benz Trucks road testing department. During this time the use profiles and areas of application will be recorded and the knowledge gained and expectations compared.

The Urban eTruck is part of a comprehensive electric initiative from Daimler Trucks. The light-duty electric truck Fuso eCanter will be in use in a global small series in 2017. Around 150 vehicles will be handed over to selected customers in Europe, Japan and the USA. Daimler Trucks is thus covering a wide application portfolio of electric trucks all over the world.

Better air quality, a lower noise level and entry restrictions are now important catchwords in the big metropolises of the world. It will be necessary to transport goods in urban environments for increasing numbers of people – and with the lowest possible emissions and noise. Therefore in the future all-electric trucks will take care of supplying people in many conurbations with groceries or other goods needed on a daily basis.

The rapid technical development is supporting this trend: Daimler Trucks is expecting the costs for the batteries of an all-electric truck to fall by a factor of 2.5 from 1997 to 2025 – from 500 euros/kWh to 200 euros/kWh. At the same time the energy density of the available batteries in this period will rise by the same factor from 80 Wh/kg to 200 Wh/kg."

"Following the world premiere in September 2016 at the International Commercial Vehicle Show the customer reaction was outstanding. We are currently talking to around 20 potential customers from the disposal, foodstuffs and logistics sector. With the small series we are now rapidly taking the next step towards a series product. "By 2020 we want to be on the market with the series generation."

"Zero emissions, quiet as a whisper and with a payload of 12.8 t: The Urban eTruck offers an impressive economical and environmentally friendly concept. The vehicle will initially go in a low two-figure number of units to customers in Germany – and later in Europe too. It will be used in real transportation applications there. The aim is to use actual application scenarios and requirement profiles together with the customer to further optimise the vehicle concept and the system configurations of the electric truck. The tests will include use in shift operation, charging times plus battery and range management.

"When it comes to future technological issues we have set the standards in the sector, for instance with regard to electric and autonomous driving plus connectivity. 2017 will now be our year of implementation: step by step we are developing the vehicles and systems to achieve market maturity."