Tesla CEO Elon Musk Has Always Had A Need For Speed 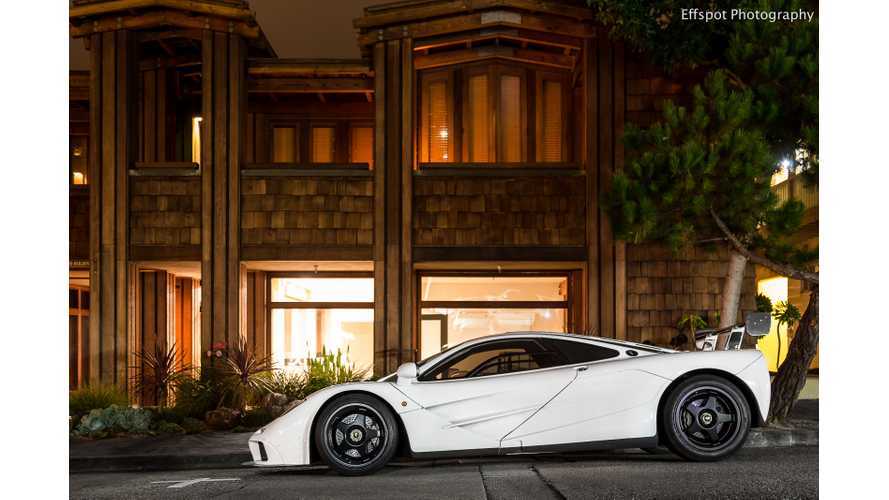 Elon Musk is a man of many interests, from space travel to boring tunnels. His skills as an entrepreneur, financier and storyteller have been integral to his success in building Tesla from a startup to a major automaker. But let’s not forget another aspect of Mr. Musk’s personality, arguably just as important to the Tesla phenomenon - his love of fast cars.

The McLaren F1 with it's extravagant wings-for-doors

When the 28-year-old Musk sold his internet company Zip2 to Compaq in 1999, taking home a paycheck reported to be around $22 million, he did not buy a Prius or a Honda Civic, but a McLaren F1, just about the highest-performance car made at the time, in which he proceeded to have numerous “adventures” on the roads of California.

The F1 is undeniably one of the fastest and most exclusive cars ever made - it has a top speed of 240 mph, and a V12 engine with a heat sink made of solid gold. Only 64 street-legal versions were ever made, and each one took over three months to build (a far cry from what Tesla plans to do on the Model 3 production line).

This 1999 video of Musk taking delivery of his new toy may not be of any great historical significance, but it’s essential viewing for lovers of Muskiana, an endearing snapshot of a time when the Iron Man was just another 20-something multimillionaire.

“It’s just a moment in my life,” says Elon, noting that he was sleeping at the YMCA three years earlier, and going on to discuss the beginnings of the company that would become PayPal. “It’s decadent,” says Musk’s then-fiancée, Justine Wilson. “My fear is that we become spoiled brats, that we lose a sense of appreciation and perspective.”

Elon made the McLaren his daily driver for several years, but a later love supplanted it in his heart - after driving the first production Tesla Roadster in 2008, he said, “I really think this is the most fun car I’ve ever owned, beating out the McLaren F1 and my 2007 Porsche 911 Turbo.”

Sadly, Musk ended up crashing his F1 in spectacular fashion, even saying, “Watch this!” to his passenger, PayPal partner Peter Thiel just before going airborne. An interview with PandoDaily in which Musk tells the whole story makes an interesting counterpoint to the video of him taking delivery in happier times. Not that Elon seems very upset about destroying his million-dollar supercar - it wasn’t even insured, he reveals, to laughter all around. Could Justine’s fear of becoming spoiled have come true?

Above: Musk explains the demise of his McLaren (Youtube: Pando Daily)

The need for speed was something that Musk shared with all the Tesla founders. Ian Wright converted a lawn mower to a go-kart at age 10. J.B. Straubel set a world record in a Porsche 944 that he had converted into an electric car. Martin Eberhard, after his prescient observation that his Palo Alto neighbors had Priuses in their driveways next to their BMWs and Mercedes, imagined “the Porschius, a car for people who love cars and who also care about oil consumption,” which combined the best features of Porsche and Prius.

Make no mistake, Tesla’s emphasis on the performance and appearance of its vehicles was and is the reason why it dominates the headlines while other electric models (such as the practical but dull offerings of GM and Nissan) struggle for recognition. Pre-Tesla EVs, such as the 1970s CitiCar and GM’s ill-fated EV1, were poky, unattractive affairs, designed for efficiency and nothing else, and to the general public, that’s what electric cars were until the Roadster squealed onto the stage.

Musk and his partners understood, as no one else did, that their target market was “car guys,” and they understood how these guys thought, because they were car guys themselves. They spent quite a bit of time and money getting the styling of the Roadster just right - something that people who aren’t “into cars” would never understand. One of the things that bothered Eberhard about the fuel-efficient “dork-mobiles” he saw on the road was the fact that they looked so square and unexciting.

Does it seem odd that a man whose goal is to bring about the end of the oil age, and save mankind from its self-inflicted terminal illness, could have taken such joy in a roaring, gas-guzzling pinnacle of internal combustion technology? Maybe, but that appreciation for the finer points of power, torque and handling is what eventually put Tesla on the map.

Back when Musk announced Tesla's dual motor "D" variant for the Model S, Road and Track reported that, "Musk said he benchmarked the McLaren F1 as The D's acceleration target. With a claimed 3.2 second 0-60 run from a comfy sedan that weighs nearly 2.5 tons, we'd say he nailed it." Now, with Model S' ludicrous 0-60 acceleration clocking in at 2.28 seconds, he's left his old dream car in the dust.

In the end, even though Tesla will try to appeal to a much broader market with its Model 3, the worldwide community of car guys is where Tesla’s roots lie. In a sense, there will always be a little bit of that thrilling McLaren F1 in every car Tesla builds.