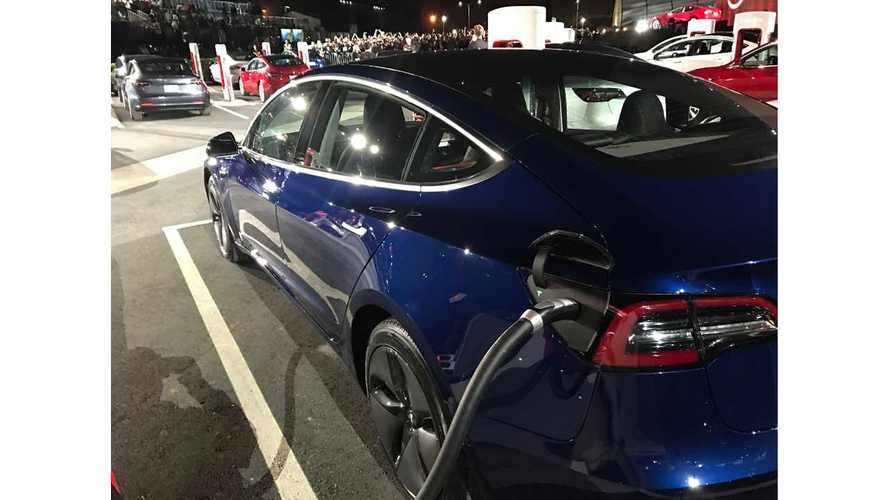 The first 30 Tesla Model 3s arrived in the US in July...by year's end the new Tesla could be contributing as much as 10,000-20,000 per month if production goes as per the company's plans

Unlike the traditional automotive market in the US, which has been in free fall of late (and off a massive 7% in July), the plug-in electric vehicle segment in the US has been on an upward swing for almost two years (year-over-year gains have been noted in the last 22 consecutive months*).

Now in July, the most anticipated offering to date finally arrived in the US to further help the numbers in the second half, the car of course being the Tesla Model 3.

Best selling plug-in on dealer lots in the US? The Chevrolet Bolt EV - topping the charts for the first time ever!

At a special event in Fremont, California, Tesla delivered the first 30 Model 3s to anxious owners.

And while the Model 3 didn't assist in July's EV sales (at least in any meaningful way), the plug-in segment needed no help this month as some ~15,607 vehicles were sold, a gain of almost 20%.

What did help push the numbers higher was the Chevrolet Bolt EV, which lead all plug-in offerings in sales in July - a first for GM's EV; during the month almost 2,000 Bolts were sold.  Better still, July was the last month of the EVs regional roll-out, as the Bolt will be available nationwide starting in August - can 3,000 sales months be far off?

Of interest in July:

Looking ahead, the Tesla Model 3 is expected to add at least 25,000 sales over the next 5 months, and the US market will also shortly see the introduction of the Hyundai Ioniq Plug-In, the Kia Niro PHV, the new Nissan LEAF, next gen smart EDs (coupe and cabrio), Porsche Panamera 4 E hybrid, and the Honda Clarity PHV.

The takeaway from this month's report, and what is in the pipeline?  Plug-in electric vehicles sales will continue to rise, and rise even more dramatically in the near future.

Other Statistical Points of Interest from July 2017

The Plug-In Mini Countryman might prove to be popular in the US, as 75 copies were sold in its first full month on the market