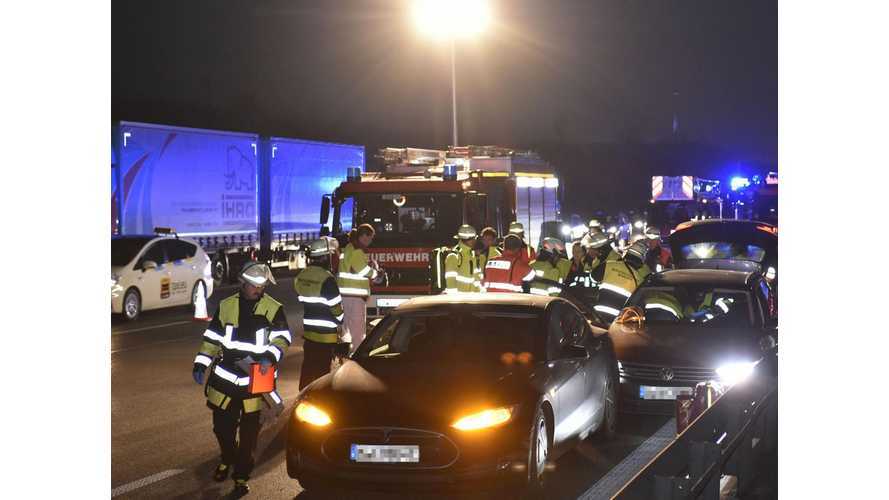 Reports from Munich are commending a Tesla Model S driver for his heroic actions. Not only did he save a man's life, and potentially others, he carried out the task by forfeiting his prized car.  Later, in appreciation for the good deed, Tesla CEO Elon Musk said Tesla would pick up the tab on repairs!

The driver (Manfred Kick) was driving on the A9 (Autobahn) and noticed a VW Passat drive past him with a slumped over driver. The "ghost" car seemed out of control and the situation could have become dire quickly.

Fortunately, at the time, it was moving slowly in the left lane, so Kick thought quickly and pulled ahead of it with his Model S, in order to create a barrier, and bring it to a stop.

After stopping the vehicle, Kick climbed into it and grabbed the motionless man to begin administering first aid. During this time, a few other onlookers helped Kick by securing the area and calling emergency services. While Kick was in the vehicle trying to help the man, a hands-free phone call came through the car's system. He told the caller of the situation and asked them to also call emergency services. He explained:

"I felt his pulse and then put him in a lying position so that the foam ran out of his mouth. I felt like I was in a movie. This was an extreme situation in which you just work." (translated from German)

Later, Kick learned that the driver had likely had a stroke and his quick thinking moved the man to medical treatment sooner. Also, had the situation escalated, the stray car could have easily hit other vehicles in the area.

And although the damage did not appear severe to Kick's Model S, the repair bill on that aluminum body was going to be fairly significant...that is until the Tesla CEO got wind of the good deed and decided his company should pick up the tab.

In appreciation, Tesla is providing all repair costs free of charge and expedited. https://t.co/D68HNJcCoQ

Due to the fact that it was considered an accident (even though Kick was doing the right thing) he still has to undergo an investigation. An authority from the local police department has already contacted him. Kick half-joked:

"That's how it is, our state of law. I guess I will not get into big problems." (translated from German)

"This is a normal procedure. If someone is injured in an accident, the prosecutor's office has to be submitted for examination. Similarly, if a policeman acts in self-defense. It's also necessary to check what happened exactly." (translated from German)

Fortunately, thanks to Kick, the 47-year-old VW Passat driver is awake now and in stable condition.