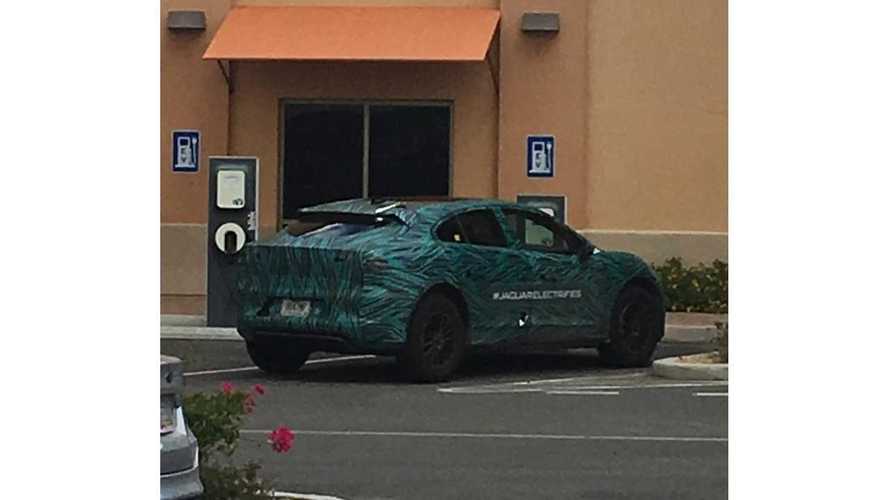 The Jaguar I-Pace is planned for deliveries in 2018 and has already started pre-production validation in Germany.  The Jag has 400 hp, 516 lb-ft of torque and a 90 kWh battery.

But before it arrives, and like many pre-production all-electric vehicles, it has to make a pilgrimage to Arizona...a state that knows what "hot weather" testing is all about!

Another look at the Jaguar I-Pace (CarPix)

In this case, InsideEVs' reader Michael C caught what we like to call a "unicorn in the wild", a camouflaged EV using a working Bl!nk fast charger!

Michael tells us that the I-Pace was spotted in the Phoenix area, specifically Anthem, AZ at the Anthem Outlets which is off on the I-17 about 30 miles outside of Phoenix.

Interesting, and while we have been told to expect "more than 220 miles" (EPA) out of the all-electric Jaguar when it comes to the US, the 90 kWh battery on board always felt like the company was underselling the EV's abilities, Michael actually spoke to the testers (who apparently weren't all that keen to see him), but he did get to ask about the range, to which one of them said "about 250 miles"; which is more reasonable to our own napkin-back math calculations on how far we thought the I-Pace should be able to travel.

We caught the concept Jaguar I-Pace recently also turned up at the Formula E's Brooklyn race last month - as one can see, the production-intent model is very close to the concept

Michael also noted the usual pile of laptops, cords and other engineering do-dads inside the car we are used to see when vehicles are out in the field being tested.

Gallery below:  More Jaguar I-Pace in camo out on the roads (CarPix/YT)