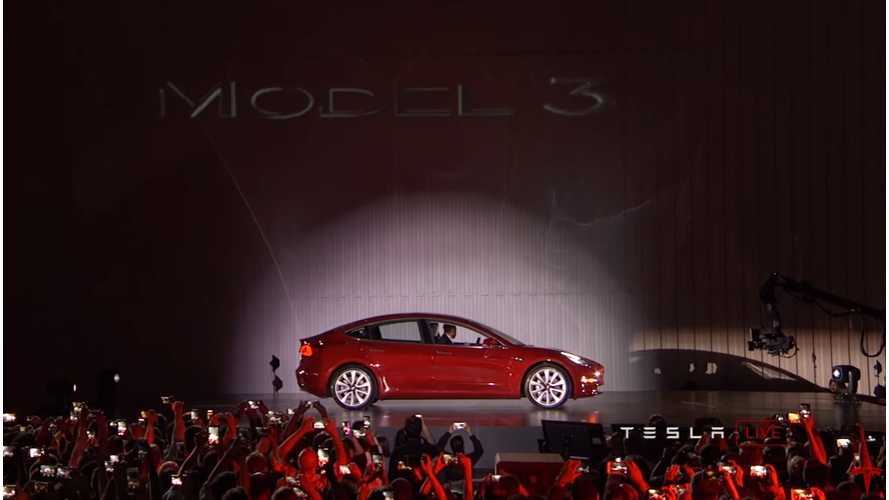 Now that we’re crossing the finish line of Tesla’s first master plan, this also marks the end of the Model 3 Scoffathon. Let’s pause and reflect on the sage words of various experts who flashed their credentials and then swore up and down that Tesla would never get here, to the high-volume $35k car.

He speaks at events, you know.

Sept, 2014: Battery expert issues “sobering” report. Wanna talk credentials? This guy, Dr. Menahem Anderman, sure has ’em. He’s the chairman of AABC, which stands for Advanced Automotive Battery Conferences. It has a logo and stuff, so if you’ve never heard of it, you must be out to lunch. Anyway, the sobering report says Model III will start at $50,000, PERIOD. So a round of applause for Dr. Anderman as he crosses the finish line. This guy is a battery consultant, you know. His client list contains about every automaker except Tesla. But he’ll sell you his report on Tesla’s batteries for $2,800, the rascal.

April, 2014: Harvard Business School guy says Tesla “won’t be able to scale.” Again, check those creds. This is hah-vid we’re talking about. So why can’t Tesla scale? Because it lacks the money, clout and experience required to drive down pricing far enough to make Model III hit the tipping point. Round of applause as Tom Bartman, billed as “a member of the Forum for Growth and Innovation, a Harvard Business School think tank studying disruptive innovation,” crosses the finish line. His LinkedIn page is stuffed with Tesla knocks to boot.

Feb. 2, 2014: Bob Lutz goes on his ill-will campaign. Tesla can’t make money on Model III, but can’t afford to lose money on it like a big automaker could, so Tesla is finished. TeslaMondo has chronicled Lutz’s frustratingbrushes with EV greatness. He’s the game show contestant who hits the buzzer first but then botches the answer, over and over, while Musk keeps racking up the points. It’s enough to make a man froth at the mouth.

That stuff in the background means this guy knows what he’s talking about.

K.M. Abraham is a research professor at the Northeastern University Center for Renewable Energy Technology, has worked for 30 years on lithium battery technology, was one of the first to demonstrate rechargeable lithium batteries and invented next-generation lithium air batteries. He also has a battery consulting company called E-KEM Sciences.

“I don’t see how they can reduce the cost more than 20%. They are dependent on the whole battery community. We are already reaching the limit on the energy density you can get in the lithium-ion battery. Next-generation chemistries, such as lithium air, are another 25 years away from commercialization.

“It won’t be as simple as it has been so far. We’ll need scientific discoveries in the electrode materials. Usually, from invention of battery materials to production it takes 15 to 20 years, and we haven’t invented it yet.

“As far as scale manufacturing, it’s an already perfected business; just doubling the world production wouldn’t get that much improvement per unit. The major producers in Korea, Japan, are using massive amounts of material already. And battery manufacturing is a very, very low-margin business at scale.

“And are integrated manufacturers, they can put their battery cells into portable consumer devices, and they can make up the price there.”

He passed a few months ago, so he never did see the Model III launch.

Peter Wells is a professor of business and sustainability with a focus on the global automotive industry at Cardiff Business School’s Centre for Automotive Industry Research, in Wales.

“Tesla is taking advantage of the moment to make an enormous roll of the dice.

“The danger there is if Tesla cannot make this work, the whole electric-vehicle sector will be set back a lot.

“But it could change the way we buy cars, we use cars, the revenue streams, the business models. In an industry that has hitherto been riddled by conservatism, this is a disruptive idea.

“There’s a lot of cost that can be taken out at larger scales of battery manufacturing. But it’s all about the capacity utilization. A battery plant that’s not running will cost you a fortune.”

Here’s looking (askance) at you, kid.

Bill Reinert was national manager of Toyota Motor Sales U.S.A. Inc.’s advanced-technology group from 1990 to 2013. He co-led the U.S. product-planning team for the second-generation Prius and worked on several advanced hybrid electric products, direct hydrogen fuel-cell vehicles and plug-in hybrid concepts, among others.

“We didn’t anticipate Prius would sell like it did. There was at least a year or more where we couldn’t increase sales because not just the battery but a whole host of other parts couldn’t be ramped up quickly enough.

“Toyota can take a suspension they use on hundreds of thousands of cars and put it on a low-volume car. Volkswagen is the king of this. Tesla doesn’t have that ability. It has to be bespoke, built from the ground up.

“If I were in Musk’s shoes, I’d be on a jet tomorrow to go to LG Chem, Panasonic, GS Yuasa, and telling them this is our long-term projection. But if , I wouldn’t be discussing this grand design, this mythical plant.

“What I would start out with would be bare-bones manufacturing and make sure that we are making as many of the product as we need.”

Musk succeed where I failed? Impossible.

David Vieau served as chief executive of A123 Systems from 2002 to 2012. The company, which manufactured lithium-ion batteries for electric cars, power tools and utility grid applications, raised more than $1 billion in venture capital, public equity and government funds. In 2012, the company filed for bankruptcy, and its assets were acquired at auction by China-based Wanxiang Group.

“It was very clear back in 2008 that there would be in the long term a market for electrified vehicles. The question was, how long would it take to develop? It was also very clear that if left on its own, without some stimulus, it would take quite a long time.

“The difficult part is if you get out in front of demand and the industry just doesn’t make it. It could be a tremendous success in five years, but if you are caught with a factory at the wrong time, that’s where the obituary comes in.

“What is saying is that they need the capacity. It’s unlikely their suppliers are going to take the risk. They are going to have to take it themselves. The risk associated with their growth will be theirs.”