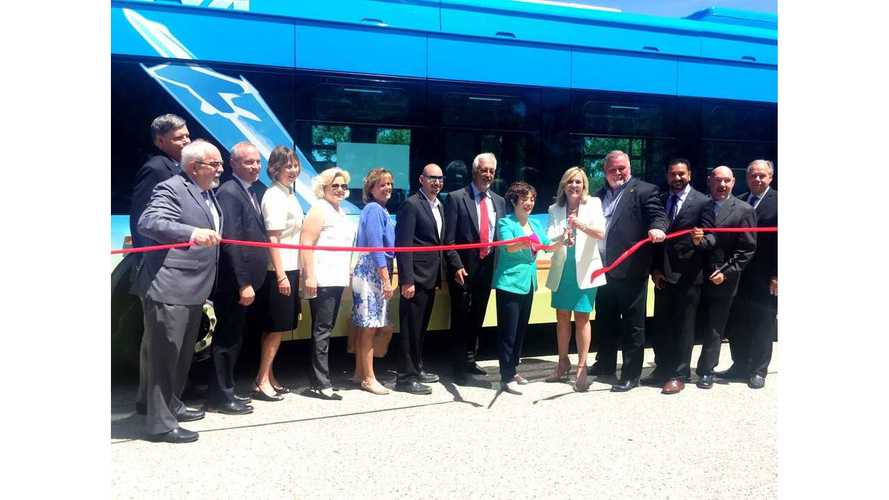 The Antelope Valley Transit Authority (AVTA) has become the first transit provider in North America to have an all-electric, 60-foot articulated electric bus in its fleet, supplied by BYD.

It's the production version of the prototype shown some two years ago, with a ~547 kWh battery and has an expected real world range of 275 miles according to a company spokesperson.

This particular vehicle is the first of thirteen 60-foot BYD buses ordered, together with a shorter version, in AVTA's broader goal to switch its entire fleet to BEVs by 2018.

Another big achievement is the delivery of BYD's 250 kW WAVE wireless charging system that should be capable of recharging the bus in around two hours.

"The Antelope Valley Transit Authority (AVTA) is pleased to announce the delivery of its first 60-foot articulated electric bus made by BYD; as well as the completion of the first ever WAVE inductive chargers in Southern California. These represent major milestones achieved by the AVTA toward its goal of “100% Green by 2018” -- opening an exciting new chapter of innovative, world-class transit service for the region.

Today’s accomplishments are the result of visionary leadership from local and regional community leaders. The AVTA electric bus conversion project began with a $1.9 million dollar grant from Los Angeles County Supervisor Mike Antonovich, which provided the project with a critical kick-start. Backed by its Board of Directors, AVTA then adopted a bold vision of converting the AVTA’s entire existing bus fleet to 100% battery electric vehicles by 2018. The AVTA executive team and staff have worked tirelessly to bring this vision to life.

“Today represents a special day for the AVTA. After years of vision and hard work, it ushers in a new era of high quality transit service that will serve our community well -- as AVTA becomes a model for other communities to follow.”

“Today would not have been possible without teamwork, both within AVTA and also with our partners at BYD Motors and WAVE who have worked so hard to pursue the dream of a zero emission transit fleet. Today is yet one more step towards the achievement of this vision.”

“It has been such a pleasure partnering with the leadership of the AVTA and indeed community leaders from across the region. AVTA’s new BYD 60-foot articulated bus is the first generation of the most advanced electric bus on the market. We celebrate this exciting day for the community, and we look forward to helping the AVTA ultimately meet its 100% zero emission transit fleet goal.”

“WAVE is honored to have been chosen as the sole provider of our revolutionary 250kW wireless chargers that contribute to the AVTA’s remarkable achievement. The AVTA and entire community should be proud of setting a high bar both regionally and nationally that others will look to as the zero-emissions transit model of the near future. We look forward to continuing this exciting partnership with the AVTA and to helping provide a blueprint for other communities to follow.”

“As both AVTA Chair and Vice Mayor of the City of Lancaster, I am doubly proud – as AVTA’s goal of ‘100% Green by 2018’ dovetails perfectly with the City of Lancaster’s twin goals of becoming a Zero-Net Energy City as well as the Alternative Energy Capital of the World. Today, our two major steps at AVTA are great strides toward the City’s energy goals.”