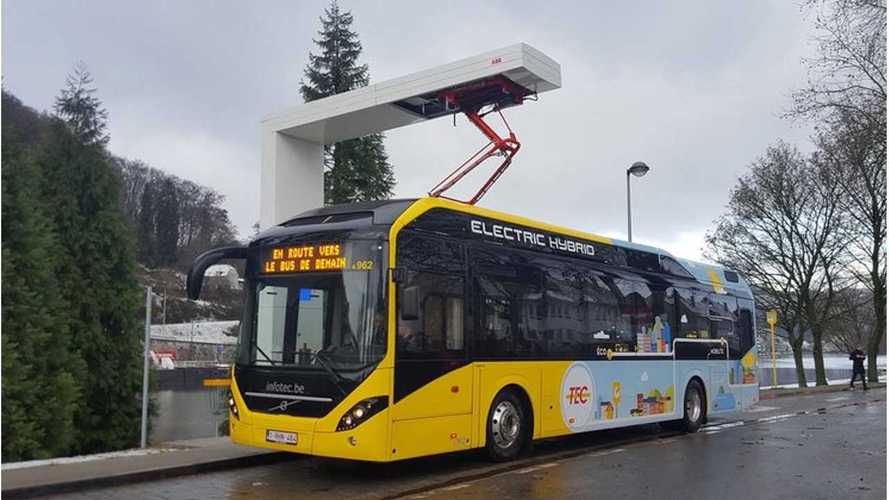 The European plug-in electric bus market has really started to gain momentum, as recent new orders have grown in volume.

One of the latest projects to demonstrate the trend of turning to electricity is in public transportation, specifically an order for 90 copies of Volvo's 7900 Electric Hybrid buses for the Belgian cities of Charleroi and Namur, to be placed by public transport company, TEC Group.

As Volvo plug-in hybrid buses can cover only several miles on electricity alone, 12 fast charging stations for 3-4 minute recharges to be supplied by ABB along the route.

Delivery and installation will get under way this autumn, and as a result from 2017 - 90% of Namur’s public transport will be electrified.

Together with the previously delivered 11 buses and three charging stations, the TEC Group will have 101 PHEVs and 15 stations in operation.

"Volvo’s electric hybrids and ABB’s fast-charging systems are based on a common interface known as OppCharge, whereby the charging stations can also be used by electrified buses from other vehicle manufacturers. OppCharge is now being implemented as a common interface in more than 12 countries.

The Volvo 7900 Electric Hybrid operates quietly and exhaust emission-free on electricity for about 70 per cent of its route. Battery recharging takes 3 to 4 minutes with so called opportunity charging. Energy consumption is about 60 per cent lower than for a corresponding diesel bus. Volvo’s electric hybrids have already entered service in cities such as Gothenburg, Stockholm, Hamburg, Luxemburg, Namur and Curitiba."

“This is extremely gratifying! The order is a new milestone in our electromobility drive and confirms the competitiveness of our offer. We can see that more and more of the world’s cities are choosing electrified city bus traffic in order to deal with poor air quality and noise. The common interface for fast charging of buses and trucks, OppCharge, is gaining ground. The use by many suppliers of a common interface will facilitate the transition to electromobility in the world’s cities,”.

“As public transport company, the TEC Group is very proud to be a leader in the increase of the energy efficiency of its fleet. This strategic investment will participate in the improvement of the quality of life in the main city centers, and will allow the Walloon Region to achieve its environmental goals. The hybrid technology is the best compromise between the operational constraints and the energy efficiency for urban buses today”.