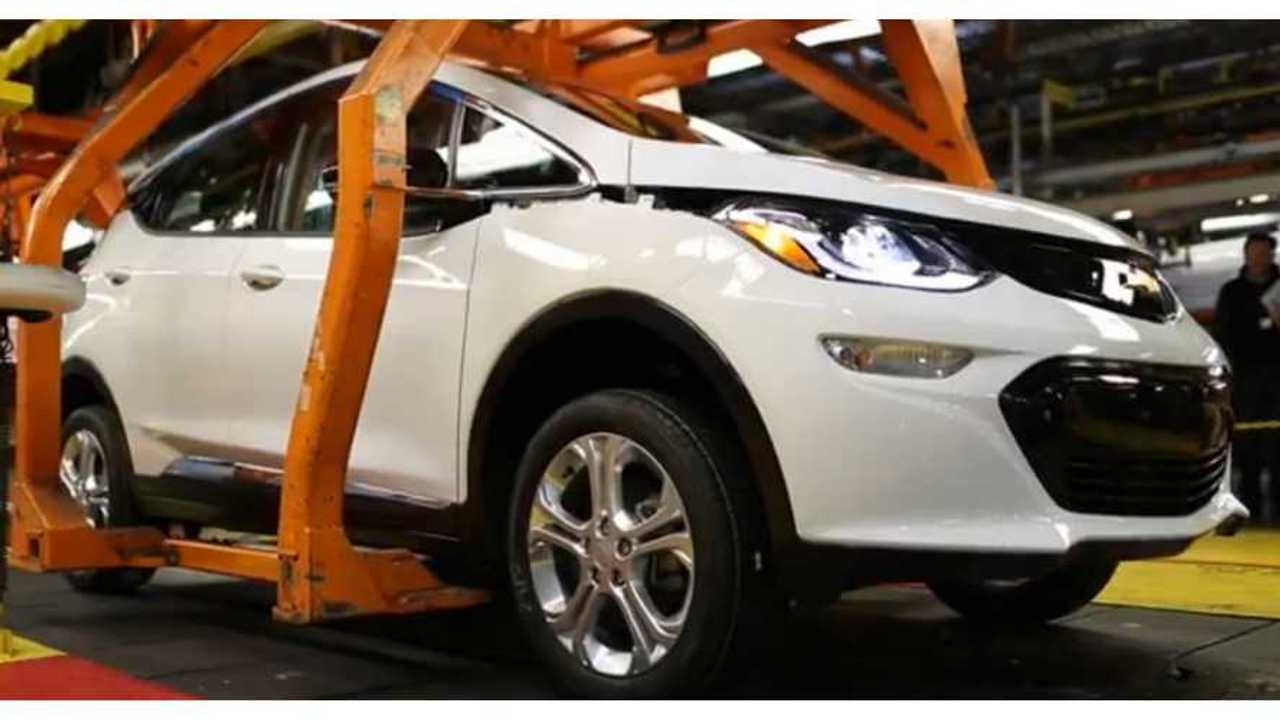 The extended summer shutdown at GM’s Orion plant, where the Bolt BEV and the Sonic ICE-subcompact are made, has been spun in all directions. But it doesn’t look good. Sonic is a modest-volume car, so had Bolt demand gone through the roof we might have seen a shortening of that shutdown, not an extension.

To be fair, in EV terms the Bolt’s sales start hasn’t been too bad. A year or two earlier the numbers   might have been considered stellar (see full US sales of all models here).

The Bolt’s 6 first full months – 7.6k domestic sales and at least 1.4k overseas sales during the weaker front half of the year (plus 600 sales in its first few days at the end of December), delivered while only part of the US is open for sales – is better than the Tesla Model X start in late 2015 and early 2016. Sales aside, particularly impressive is the lack of any major product problems.

- The Bolt’s 100+ inventory days are definitely worse than planned for this point in time.

- Head to head, the Bolt is currently outsold in the US by the Prius Prime PHEV, launched a month earlier with fairly minimal range, only 4 seats, and a parent brand (Prius) in freefall. This, despite most of the Prime’s production swallowed by domestic Japanese demand.

- The Bolt is being even more badly outsold by its veteran sibling the Volt, and nearly matched by the aging Gen 1 Leaf (that’s in the US; abroad the Leaf outsells the Bolt by orders of magnitude).

The Bolt was seen by the hopeful (yours truly included) as a potential game-changer. Its range-to-price combination blows everything else out of the water, and reviews have been overwhelmingly positive. Instead, we have mediocre sales, and GM squandering nearly a year’s head start on Tesla’s Model 3. Not many people thought that in mid-2017 the Bolt would only be #5 on the US year-to-date scorecard, despite directing almost all production volume domestically. What’s going on?

The Main Fail: Target the Wrong Segment, or no Segment at all

By far the biggest reason for the Bolt’s woes, is the exact same reason the Volt has never fulfilled its huge potential. Twice in a row, GM has developed a flagship mass-market EV without targeting any major segment or constituency of the US auto market.

What segment did the Chevy Volt target? Its sporty design with 4 seats, looking bigger on the outside than its cramped interior, suggests either aging macho Boomers, or edgy twenty-somethings. But the former are not the best candidates for jumping first into the EV deep end, and the latter didn’t have the $$ to buy a Volt. This is not the Tech side’s fault. The Tech side doesn’t decide, “Let’s make a midsize SUV!”, or “Let’s make a 4-seater!”. It’s upper management, via product management and Marketing, who instruct them.

The 2nd Generation Chevrolet Volt added a 5th "seat" in 2016

The 4 seats and minimal space decisions, essentially gave up on more family-friendly segments. The environmentalist segment, small but hardcore, was also not courted too much for fear of losing conservatives, who are perceived as dominant among Big Three clientele. The Volt did get some greenies, some tech fans, lots of large fleet deals, and a bit of this and that – but the original design instructions doomed it to second-tier volumes.

With the Volt, one could argue that the CEO at the time was EV-skeptic and didn’t try too hard. That’s not the case with Mary Barra, who got personally behind the Bolt (and the Gen 2 Volt), and should probably be credited in part for its speedy development. But system-wide ineptitude and cluelessness about EVs cannot be cured overnight by one woman at the top with a magic wand.

What segment does the Bolt target? Its 5-seat passenger compartment is roomy. But the car pretty much ends at the back seat. Yesterday I passed by a Cmax Energi, thinking, “Ok, here’s another compact-crossover EV, maybe I’ve been too hard on Bolt?!” The Cmax definitely looked smaller than the cars around it, but reasonable. I looked up the dimensions: the Cmax is a full 10” longer than the Bolt, and also a bit taller and wider.

Inside the Chevy Bolt EV (InsideEVs/George B)

Yes, the Bolt is very efficient with its space. This what matters is how the car is perceived by potential consumers. For Europe where they value space-efficient cars, the Bolt nicely targets a major segment. Per the US size definitions, the Bolt is a subcompact.

Back of the Chevy Bolt EV

What proportion of US auto sales are subcompact, YTD in 2017?

And the current trend as everyone knows, surely the folks at GM, is towards bigger and bigger. How can you mount a revolutionary assault on the auto market, when you target the lowest and most rapidly shrinking 2-3%? Moreover, most of these cars cost <$20k, so while the Bolt’s tech is demonstrably worth its price, people who regularly buy subcompacts don’t pay that kind of money.

Going up just one size class would make a world of difference for the Bolt. There are 2 compact passenger cars in the top 10 best-selling models, and 6 compact SUVs in the top 20. The SUVs in particular can fetch prices in the Bolt’s ballpark (after the Fed incentive). Make the Bolt one foot longer keeping everything else the same, and it becomes a legit compact-crossover, very close in size to the Ford Escape. 157k Escapes were sold in the US in the first half, nearly as many as all subcompacts put together.

If the Bolt’s EPA range was 201 miles, one could at least understand making it so small in order to stay above that psychological bar. But GM engineering surely knew a while ago that they were clearing 200 miles with lots to spare. Adding a foot to the Bolt at the back couldn’t have cost much more than ~5% of range, and couldn’t have increased its price substantially.

Of course, all this means that the Gen 2 Volt, as well, is still too small, because despite looking like a Japanese compact-sedan wannabe, the Volt’s overall interior/trunk space is much smaller, about half the Bolt’s. That’s 3 of 3 in EV targeting fails.

Why do GM keep repeating the same rookie error? My best guess is that the people in charge of targeting still don’t really believe they can sell EVs to “ordinary people”. The mis-targeting is then compounded by GM’s notoriously EV-apathetic (and often even clueless or hostile) dealer network, and by weak and inflexible advertising and pricing policies.

Nissan has had a far more challenging product to sell in the Leaf, and went through actual product-quality crises that GM has yet to encounter with its EVs (again, thanks to GM’s crack Engineering teams). But while continually improving the Leaf’s technical specs, realizing that every little bit matters, Nissan has also continually re-invented and revised the Leaf’s marketing and pricing approach, never leaving it “to sell itself”. Even now, when people were ready to write off the Gen 1 as dead, Nissan has gone all-out on the deals, even “poaching” many potential Bolt sales (including our own family, I must admit).

The next generation LEAF debuts this September (InsideEVs/Darren T)

Beyond all that, Nissan has embraced the Leaf as a flagship brand. They see no contradiction between still making nearly all their money off of ICE cars, many of them gas-guzzling monsters - and developing a flagship EV as the arrow towards the company’s future, including unabashedly courting the tree-hugger constituency. By contrast, GM seems afraid of its own shadow when marketing EVs, and unsure about EVs’ role in its future.

The good news are, the Bolt is only a few months old, it’s a great car, and if GM shows the needed flexibility, its EV sales can rapidly grow. Here’s what they should do, IMHO: