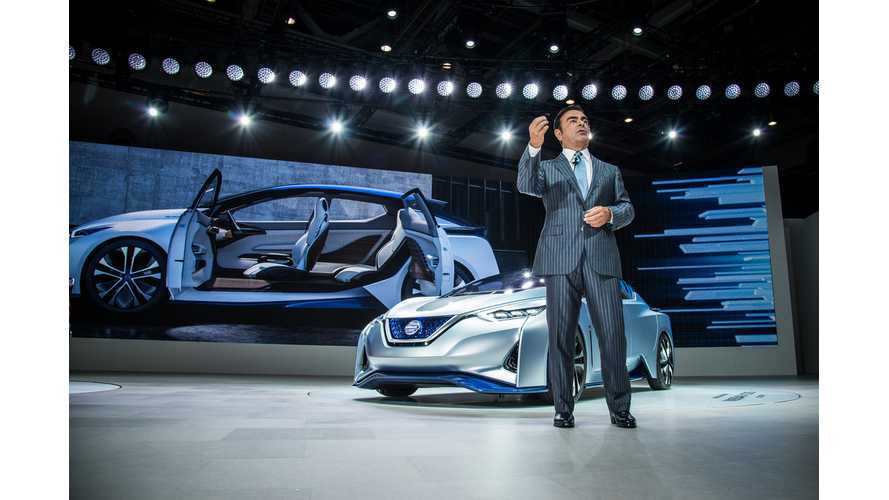 Renault-Nissan Alliance, after Nissan's acquisition of a 34% equity (and controlling) stake in Mitsubishi Motors, become the largest all-electric car manufacturing group, without fear of any other competitor coming close.

The combined entity of Renault-Nissan-Mitsubishi sold 94,265 in 2016, up 8% over a year ago.  A result that actually lagged global growth overall (41%), no doubt caused by the lack of an updated Renault ZOE in 2016 - which just launched in January, and a "new" Nissan LEAF - which Alliance leader Carlos Ghosn says will launch "shortly", and we believe to mean 'at Geneva in March'.

The Renault-Nissan Alliance, with Mitsubishi Motors, cumulatively sold 424,797 electric vehicles through 2016, making it the undisputed leader in zero-emission mobility.

The Nissan LEAF, the first mainstream, mass-marketed electric vehicle, remains the world's best-selling EV with more than 250,000* vehicles sold since its launch in December 2010.

In addition to the LEAF, Nissan also sells the e-NV200, a light commercial vehicle sold mainly in Europe and Japan since 2014.

Renault was at the top of the European EV market last year, with sales up by 11 percent at 25,648 units (excluding Twizy). ZOE led the EV ranking with 21,735 sold. Renault Pro+ recently announced the addition of two new commercial EVs to its lineup: the New Kangoo Z.E. and Master Z.E.