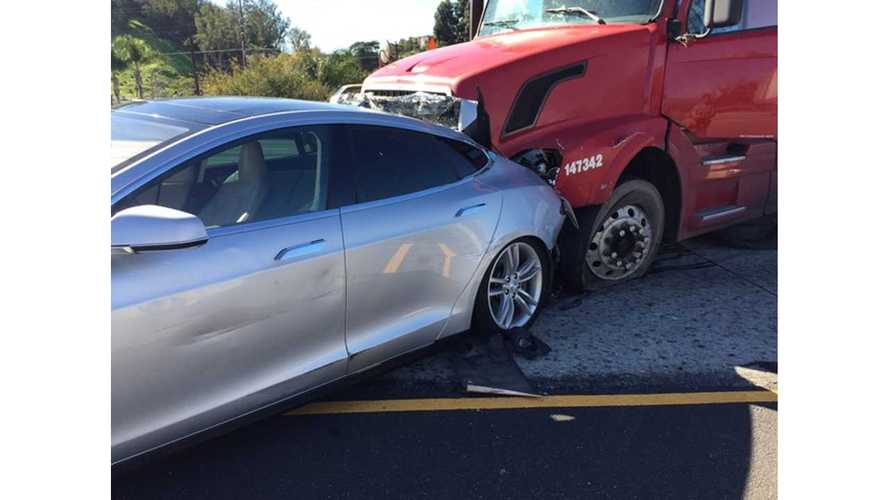 Tesla Model S Rear End After The Collision (via Exmachina70/Imgur)

The Tesla Model S driver that was recently rear-ended by a Volvo big rig had a phone interview with The Drive. He and his wife have decided that, due to the safety of the Model S, they are purchasing Tesla vehicles for the entire family.

He explained the feeling of being launched by the immediate 40 mph collision:

"It was nothing like Ludicrous mode. Launch control is amazing. But this was otherworldly.”

Gardner's 200-mile trip to deliver the Tesla Model S to a would-be eBay buyer, was cut 15 miles short when the four-car accident occurred. He ended up in stop and go traffic, but the Volvo truck failed to stop. Instead, it ended up completely on top of the rear-end of his vehicle, which was subsequently pushed into two other vehicles. The Tesla and the Volvo were stuck together such that two trucks had to work together to pull the vehicles apart. Gardner said:

“The entire weight of the truck was sitting on top of the Tesla."

"It was a four-car accident, and I hit every single one of them.”

Surprisingly, the rear window just buckled, and the cabin remained completely intact. Aside from some whiplash and aches and pains, Gardner came out of the incident uninjured. He maintains that if he was in his sports car, he would have been dead. Had he been in his Ford F-150, he may have lived, but would have surely sustained substantial injuries. He shared:

“When I got home, my wife said we need to order Teslas for everybody else in the family."

“I told her I’d been thinking the same thing on the way home.”

The Volvo big rig was a 40-ton truck, competing with the ~5,000-pound Model S. Gardner believes that the 1,200-pound flat battery pack kept the truck's front end from being in his back seat. Regardless, the Model S was considered a total loss by the insurance company, so Gardner will get about $50,000 to apply toward the purchase of his next Tesla. He already has a new Tesla Model S that he purchased previous to the accident.