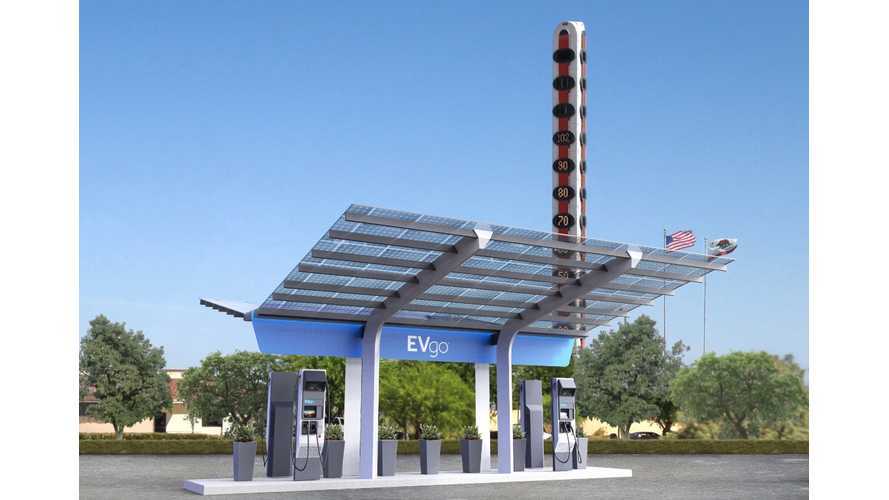 The time when 50 kW chargers (CHAdeMO and CCS Combo) were considered the basic element of a "fast" charging networks will now seemingly fade away, as new longer-range EVs need even more power to replenish range in an acceptable time.

ChargePoint Express Plus (shown in "available" and "in use" modes)

The new "ultra-fast" charging standard are seeing today goes up to a whopping 350 kW (although 150 kW maybe ultimately be the more appropriate intermediate step).

The first 150-350 kW stations are to be installed this year in both Europe and the United States.

EVgo recently announced the first US-based 350 kW station was under construction in California, and will be operational in June.  Meanwhile, ChargePoint introduced its own ChargePoint Express Plus chargers that could handle up to 400 kW.

Similar projects in range of 150-350 kW are planned for Europe, such as the massive 400 station project (350 kW) that was announced by Ford, BMW, Audi, Porsche and Daimler. Other plans in Europe have been put forward (or hinted at) by Fastned, CLEVER with E.ON, and other players.

"With the knowledge that BEVs are being developed with much faster charging capabilities, companies considering adding DC fast charging stations are now challenged on how to future-proof their investments. The tradeoff is between keeping the not inconsequential cost of offering DC fast charging under control today while preventing the sites from having to undergo costly increases in power delivery from the utility and having to replace the existing equipment in future years.

Companies investing in 350 kW fast charging stations today are hard pressed to get payback in electricity sales within 3-5 years, so to ask them to make ready a location with distribution equipment and capacity for up to 1 GW of EV charging is a tall order. Site hosts anticipating the ultrafast future of charging will also need to work with utilities to identify locations where they will not be disrupting the distribution grid."