Nissan CEO Carlos Ghosn Has Something Electric To Share, Will Open CES In January 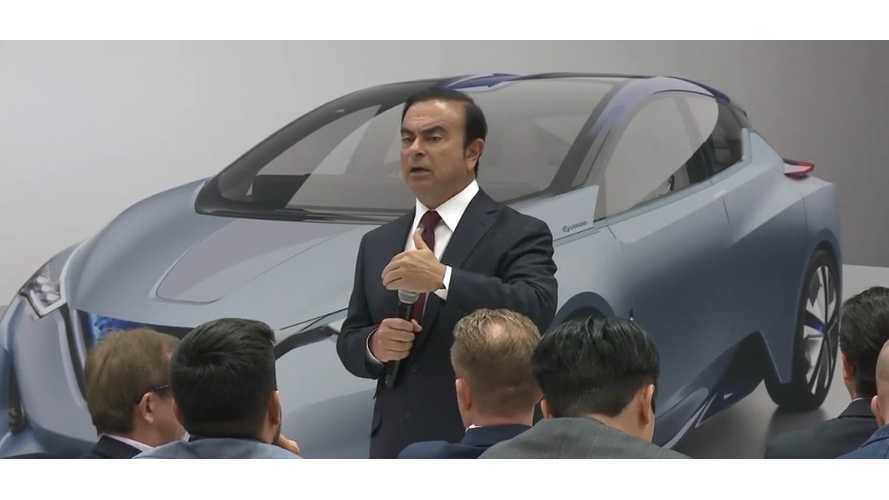 Carlos Ghosn is coming to the US, and he is bringing something new with him

For those who have been playing the "when will Nissan disclose its hand this show season" when it comes to an updated LEAF, or other plug-in related offerings game...CES just got a big boost.

And while the even money (although not from us) is still on the Los Angeles Auto Show next month for the first of the Nissan related EV reveals (press days for that event run November 14th to 17th), the "don't call us the Consumer Electronics Show" in Las Vegas in January will certainly also be in the mix.

Look, I'm reading the paper instead of driving!

CES announced today that Nissan CEO Carlos Ghosn will be giving a keynote speech at the event on opening day...and the topic du jour from the lips of the man that now controls four major automakers, will be zero emissions and autonomy.

Specifically, the Nissan boss will  "discuss a major technological breakthrough in the realization of a zero-emission, zero-fatality world for everyone".  The speech will be held Thursday, Jan. 5, 2017 at 4PM (PT) at the Westgate Theater in the Westgate Las Vegas

"In his first appearance at CES, Ghosn will unveil a vision of the world made better by the latest automotive technology innovations. In his role as leader of The Renault-Nissan Alliance, one of the world's largest automotive groups, Ghosn will share space-age advances that significantly alter our understanding of how our world will evolve."

CES will also again feature an Autonomous Vehicles Marketplace for the 4th year in a row, and promises that Nissan will be part of that exhibit.

"Carlos Ghosn is a major figure in the advancement of the global automotive industry. It is with great enthusiasm that we welcome him to our keynote stage," said Gary Shapiro, president and CEO, Consumer Technology Association.

"By championing innovation, Mr. Ghosn expanded Nissan into new international markets and committed Nissan to a future where technology innovation improves the lives of everyone, not just the few. We cannot wait to hear how Nissan will continue to revolutionize our automotive experience and our future."

We should note that with Nissan's strong EV participation at CES, and the CEO's presence in the US on January 5th, the likelihood of his participation (and Nissan's) at the granddaddy of all autoshows in Detroit (NAIAS) a few days later on the 9th, is practically a given.

So, with sister company Renault's "show it on on Thursday, put it on sale on the Saturday" debut of the new 41 kWh all-electric ZOE in mind, place your bets on when Nissan breaks cover on its new zero emission offerings: