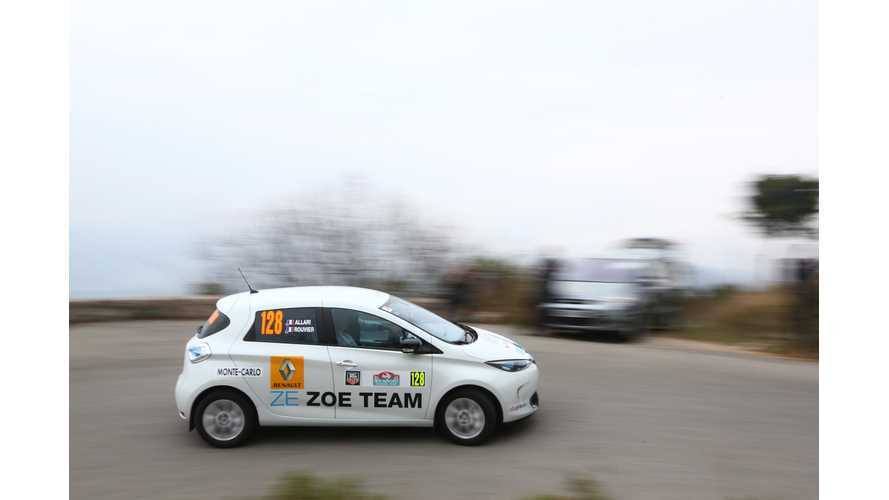 The third edition of the electric e-Rallye Monte-Carlo just got underway on Wednesday in Fontainebleau, France.

And while normally the event would not be something we would cover, Renault hopes to win for the third consecutive time...and to do so, sent four brand new ZOE Z.E. 40s to do so.

The just debuted upgraded ZOE (which is already on sale...refreshing enough) now comes equipped with a 41 kWh battery and a 400 km/250 miles NEDC range (or about 300 km/186 miles real world).

This year, 36 teams will compete on the over the 350 km (220 miles) route from Fontainebleau to Monaco.

"Renault is poised to take part for the third time in the e-Rallye Monte-Carlo (October 12-16) for zero CO2 emissions vehicles for the third time. The entry consists of four ZOEs, all equipped with the new Z.E. 40 battery that is now available for the model. The event runs from Fontainebleau, near Paris, to Monaco. After winning in both years it has participated, in 2014 and 2015, the ZOE will this year benefit from twice the driving range to take its crews even further still. Renault is also pleased to announce that the actress and model Adriana Karembeu is part of its driver line-up for this year’s rally.

The pioneering spirit of the FIA-sanctioned e-Rallye Monte-Carlo is founded on a unique combination of human endeavour and advanced technologies. Open to zero-emissions, CO2-free vehicles, the 36-strong field will start this year’s competition in Fontainebleau (70km south of Paris) and travel across France to the event’s climax in the Principality of Monaco.

Now equipped with a new battery that has doubled the model’s NEDC-cycle driving range to 250 miles, the Renault ZOE - which is targeting its third e-Rallye Monte-Carlo success from three starts – stands out as the ideal companion for weekends away, holidays and discovering new horizons, even in the world of motorsport. This year’s rally is sure to put competing vehicles to a challenging test thanks to a program that incorporates 220 miles of competitive action, including a visit to the famous Col de Turini.

The ZOE is the European market’s number one electric vehicle with more than 50,000 registrations since its launch, and the crews of the four cars entered for the e-Rallye Monte-Carlo will be looking to steer it to the top of the finish podium in Monaco on Sunday, October 16. One of the four drivers defending its chances will be Adriana Karembeu. The model, actress and TV presenter – who has a keen interest in motorsport (Rallye des Gazelles, Rallye des Princesses) and who is also an active fund-raiser for charities like the French Red Cross and Reporters Sans Frontières – will contribute her charisma and driving skills to Renault’s bid for outright victory."