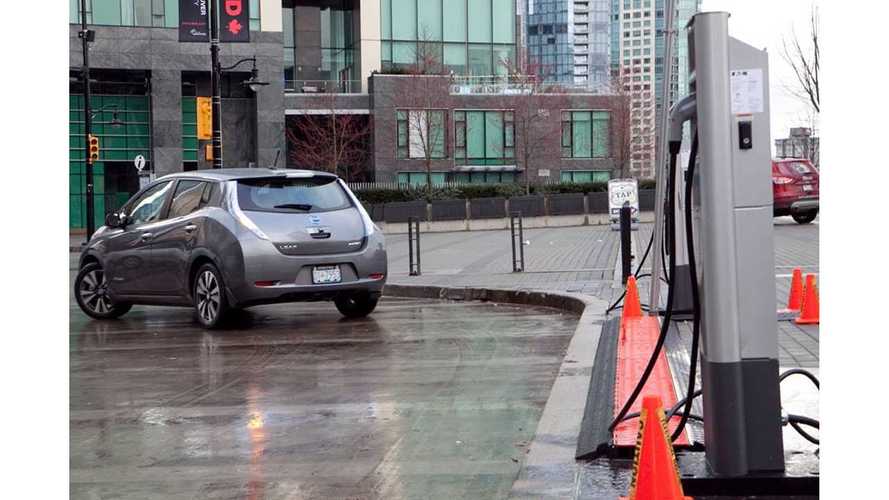 British Columbia is one of the most electric vehicle friendly province in Canada with 4,800 zero-emission vehicles on the road today (the highest ratio of ZEV sales in Canada) and highest number of public charging stations per captia (1,100 Level 2 and 30 fast chargers).

Combined with SCRAP-IT's (a non-profit society in British Columbia) new program incentives, which now offers $6,000 when picking up a new BEV (or $3,000 for a used BEV) when turning in an old petrol vehicle, a total savings of up to $11,000 ($8,500 USD) can be had for an electric vehicle purchase.

“Zero-emission vehicles are clean, quiet and reliable, and help drivers reduce fuel and maintenance costs and tailpipe emissions, and are a growing economic sector in the province,” said Bennett. “Additional funding of $40 million for the Clean Energy Vehicle Program will help make zero-emission vehicles more affordable for British Columbians and build out charging infrastructure at residences, businesses and along our roads and highways to make sure there are places to charge them up.”

Chevrolet Bolt EVs just started arriving in BC in late January - perfect timing if one has a petrol car to turn in.

The funding for the Province’s Clean Energy Vehicle (CEV) Program will be distributed over the next three years to support continued point-of-sale purchase incentives of up to $5,000 for battery electric vehicles and $6,000 for hydrogen fuel cell electric vehicles. When combined with SCRAP-IT program incentives, total savings could be up to $11,000 for a new electric vehicle.

Programs funded within the $40 million are also under development to:

“Transportation accounts for nearly half of the emissions by the average B.C. family, and light-duty vehicles account for 14% of B.C.’s overall emissions. With 98% of our electricity in B.C coming from clean or renewable sources, encouraging people to buy or lease a zero-emission vehicle is one of best ways we can reduce greenhouse gas emissions and ensure British Columbia remains a climate action leader,” said Minister of Environment Mary Polak.

The vehicle price cap established for the CEV Program in March 2016 remains in effect – vehicles priced above $77,000 are ineligible for purchase incentives. The vehicle incentives will continue to be administered and delivered by the New Car Dealers Association of British Columbia.

“The New Car Dealers Association of BC applauds the Government of British Columbia’s climate action leadership and its progressive approach to reducing greenhouse gas emissions and building on effective initiatives such as the Clean Energy Vehicle (CEVforBC) incentive program,” said Blair Qualey, president and CEO of the New Car Dealers Association of BC. “Programs like CEVforBC coupled with expanding charging systems will ensure B.C. remains a national leader in climate action and clean-energy vehicle usage. Our industry, including dealers, vehicle manufacturers and other key partners, look forward to working with the Province to continue to grow and maximize the potential of point-of-sale programs to incentivize the sale of clean-energy vehicles.”

The funding provides more money per year to meet growing demand for rebates on vehicles and specialty-use vehicles, and supports the expansion of charging stations, hydrogen fuelling stations and the development of new research and training programs, fulfilling the Province’s undertaking in the Climate Leadership Plan to expand the CEV Program to support new vehicle incentives and infrastructure, as well as education and economic development initiatives.

“Members of the Vancouver Electric Vehicle Association talk with thousands of people who are thinking about buying an electric vehicle, so we know what is on their minds as they contemplate a purchase,” said Bruce Sharpe, president of the Vancouver Electric Vehicle Association. “The CEV program addresses many of the key factors needed for electric vehicle adoption with its support for awareness, purchase incentives, and charging infrastructure. We welcome this significant additional investment in the program as well as the recent increases in the SCRAP-IT program. We are also pleased to see support for vehicles other than cars, such as bikes, scooters, and specialty vehicles. The CEV program will encourage the uptake of all these great clean energy vehicles which will have benefits for greenhouse gas emissions, air quality, and energy efficiency.”

"The Canadian Hydrogen and Fuel Cell Association (CHFCA) is tremendously excited to see continued investment from the British Columbia government in zero-emission, hydrogen fuel cell technology through its Clean Energy vehicle incentives,” said Daryl Wilson, chairman of the CHFCA. “These initiatives are further evidence of the strong commitment the Government of B.C. has made to supporting British Columbia's world-leading hydrogen infrastructure, and accelerating consumer adoption of fuel cell vehicles in the province.”

Continued, stable funding for the Clean Energy Vehicle Program supports the growth of B.C.’s zero-emission vehicle sector, creating jobs and economic opportunities for companies and organizations involved in all aspects of the supply chain – from raw materials to final consumer products – related to vehicles or vehicle components, fuel and charging infrastructure and transferable technologies and services.

“As a key component supplier to leading zero-emission, electric-drive vehicle manufacturers around the world, Delta-Q supports the Government of British Columbia’s continued efforts to grow the zero-emission vehicle sector,” said Ken Fielding, CEO of Delta-Q Technologies Corporation. “Delta-Q’s high-efficiency battery chargers are well regarded in the electric vehicle markets we serve which include all kinds of industrial, commercial, recreational and electric mobility vehicles. By investing in this area, collaborating with local universities and government bodies, we have further strengthened our position in this competitive market-place and continue to build on our reputation as an innovation leader.”

“We congratulate the B.C. government on this announcement to continue to support the Clean Energy Vehicle (CEV) Program and related initiatives,” said Dennis Rogoza, CEO of the BC SCRAP-IT Program Society. “These are very important to building consumer confidence in electric vehicles. Attractive incentives from both the CEV and SCRAP-IT Programs along with added recharging infrastructure will accelerate large-scale adoption of electric vehicles in British Columbia. SCRAP-IT is pleased the Government will also be supporting new incentives for consumers through SCRAP-IT for other low-emission options such as transit passes, car share programs and bikes”.

The Province introduced the CEV Program in 2011 and – including today’s announcement – has since committed more than $71 million for vehicle purchase incentives, charging and hydrogen fuelling infrastructure, vehicle fleet programs, public outreach, and research and training.

The #BCTECH Strategy is a key component of the BC Jobs Plan to support the growth of B.C.’s vibrant technology sector and strengthen British Columbia’s diverse innovation economy. The multi-year strategy includes a $100-million BC Tech Fund and initiatives to increase talent development and market access for tech companies that will drive innovation and productivity throughout the province.