Navigant: Global Bus Sales To Be Dominated By Battery Electric Powertrain Through 2026 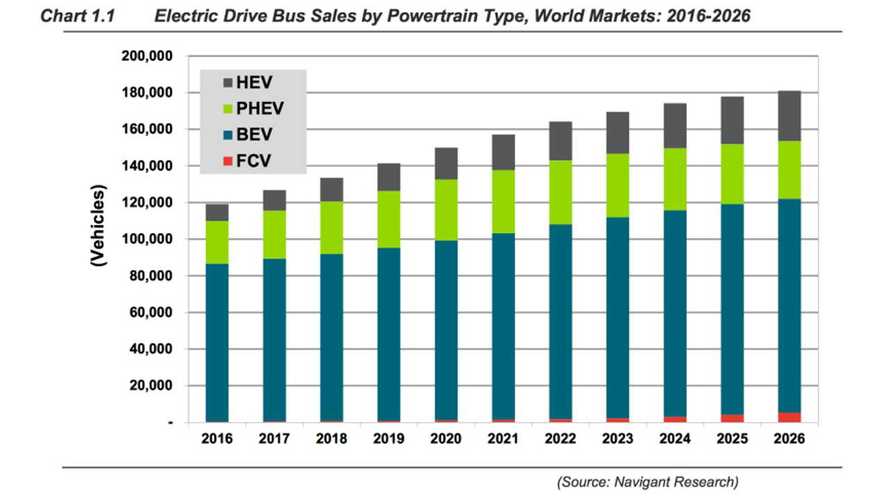 In a new report titled “Medium and Heavy Duty Buses with Hybrid, Plug-In Hybrid, Battery Electric, and Fuel Cell Powertrains: Global Market Analysis and Forecasts”, Navigant Research predicts that BEVs will be the leading powertrain for buses launched from now through at least 2026.

Navigant expects sales for electric buses to grow from 119,141 in 2016 to 181,055 in 2026. And while that growth doesn't seem tremendous, we have to remember that the bus market is comparatively small (especially compared to passenger cars at least) and that buses are extremely expensive.

As for other types of alternative propulsion for buses, conventional hybrids will continue to grow steadily, but slowly, over the next 10 years.  Fuel cell buses will grow too, but remain just a tiny/insignificant portion of bus sales. As for plug-in hybrid buses, they will grow for a few years more, before tapering off in favor of all-electrics.

Lastly, Navigant predicts that the vast majority of these bus sales will occur in the Asia-Pacific region, mostly in China to be precise. Growth there will largely be driven by China's decision to increase incentives on plug-in and battery-electric buses and the dense population-to-income curves.