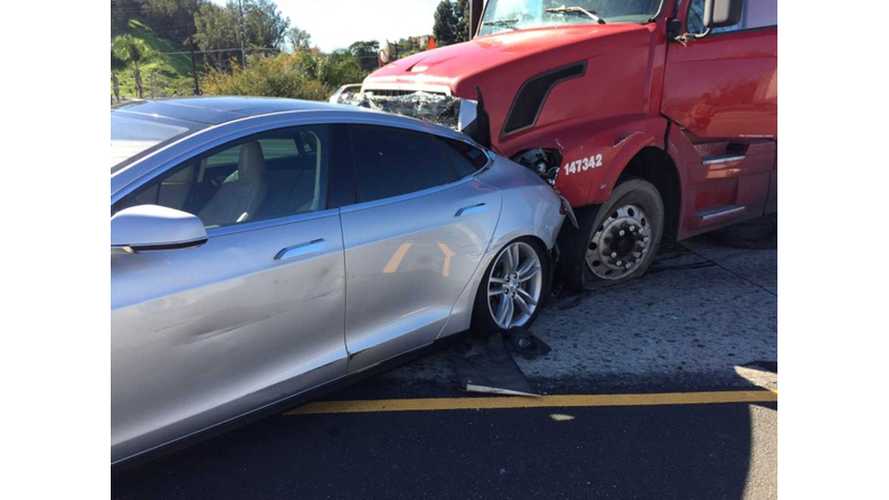 Tesla Model S After The Collision (via Exmachina70/Imgur)

This week, there has been much press about the fact that the Tesla Model S missed the Insurance Institute for Highway Safety's (IIHS) coveted "Top Safety Pick" designation this year.

To many, this came as a shock, since the Model S has long been considered one of the safest vehicles on the road.

While the IIHS scoring is extremely helpful when choosing a vehicle, and provides telling information about the vehicle's strengths and weaknesses, sometimes you have to read carefully. Other vehicles that actually fared worse than the Model S in crash tests, received the Top Safety Pick designation. However, some more minor details made it ineligible.

The pictures are of a Tesla Model S that was rear-ended by a Volvo Big Rig, and it seems that the two vehicles suffered about the same amount of damage. The Model S is a very heavy vehicle, as is the Volvo, so it is to be expected. The low center of gravity and equalized weight distribution in the Model S, due to the battery pack, helps with structural integrity and keeps the car grounded.

The person that had purchased the car (not the driver) told Reddit that the driver walked away from the crash unharmed. In the pictures, it looks as though the cabin wasn't affected at all. Even the rear seats look to be intact. The driver believes that if it weren't for the Model S, he may have been killed or badly injured. Unfortunately, the car never made it to the purchaser (he bought it on eBay), because the accident happened during its delivery. It was the original owner driving the vehicle. We guess it's much, much more unfortunate for him.