Driving Electric Is Cheaper Than Gas In All 50 U.S. States 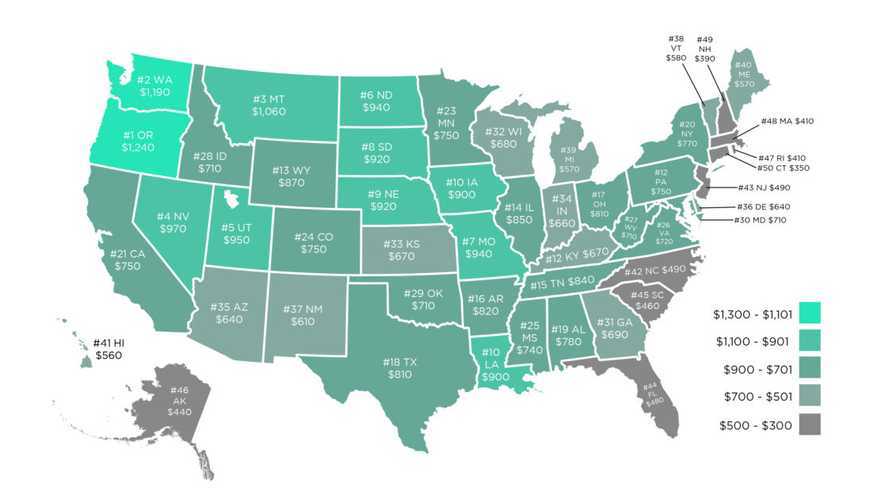 Plugless Power released a very interesting comparison of driving costs on electricity and gas for various states in the U.S.

As it turns out, electricity driving is cheaper in all 50 states - using average prices and mileage for the analysis.

In general, annual savings are highest in those states with high average miles driven per car as one might expect, as you save more with every mile of EV driving.

The least profitable state to plug-in is Connecticut at a $353 saving per year; we note that the average miles driven there stands at just 11,602 miles.

Here is the full blog-post from Plugless Power:

Driving on Electricity Is Cheaper Than Gas in All 50 States

Saving money is not the only reason for buying an electric vehicle. Some people enjoy the instant torque, improved safety, better handling, quieter ride, and cleaner air. That said, cost is an important factor in any major financial decision. So how does it play out with your new electric vehicle?

Electric vehicles can be more expensive than comparable gas cars up front. The differences in monthly car payments is fixed and easy to understand. Fuel costs for new electric vehicle drivers are a different story. For gas car buyers, fuel costs are familiar and expected. But how does electricity pricing compare to gas costs? It’s less intuitive to figure out for most of us.

Electricity and gas markets are different creatures. Comparing them fairly can get tricky. This comparison starts with a current snapshot of gas and electricity prices in every state. The snapshot shows costs for a year of normal driving in each state using electricity versus gas. In many ways, the snapshot loads the deck in favor of gas cars. For one, gas prices have been very low for the past year. The national average cost of gas in this snapshot is $2.20 per gallon. Another factor favoring gas is the average electricity price is higher than what EV drivers really pay in most states. The reason is that states with the most expensive average electricity rates often have discounted pricing at night. Electric vehicle owners tend to charge at night, so the snapshot overrates the cost of charging at home.

Driving on Electricity is $60 Cheaper than Gas per Month

Surprisingly, even with these disadvantages it is cheaper to drive on electricity than gasoline in all 50 US states. On average it is $60 cheaper per month to drive on electricity than gasoline. That’s $60 per month saved on fuel alone — not including lower maintenance costs, fewer or no oil changes, and time saved in states that allow EV drivers to use the carpool lane.

Sixty bucks a month is significant over time—that’s $3,600 over five years. More than enough to cover some of the most innovative EV upgrades like a full wireless charging system from Plugless.

Top 10 States for Driving on Electricity

Missourians Save More Because They Drive More

One big surprise is that EV-crazed California is nowhere near the top of this list. At 17.74 cents per kilowatt hour, California electricity rates are 25% higher than the national average.

However, the true savings for most electric vehicle owners in California is much higher. California is one of those states where average pricing is very different from what electric vehicle owners really pay due to Time of Use rates. During peak times, California energy prices increase to over 40 cents per kWh, but at night they drop all the way to 10 cents per kWh. When considering California’s high gas prices, the true savings for driving on electricity instead of gas is about $1,000 per year in the Golden State. Not to mention, EV owners in California can also qualify for a special state tax credit of up to $2,500 for the purchase of a qualifying low- or zero-emissions vehicle.

Editor's Note (InsideEVs):  California's rebate program (details) has increased to up to $4,000 and is not a tax credit, but an actual cash-back rebate

Why Some EV Owners Get Special Electricity Prices

Major utility companies in many states offer special time of use rate plans, some with additional benefits for EV owners. That can seem strange because electric vehicles use more electricity than any other appliance, so it seems like a major loss for utilities. The reason it makes sense is that that EVs can use a large portion of grid capacity overnight. This is during times when grid operators would normally have to run at a loss or shut down plants altogether. It’s a bit like restaurants that offer lower prices for happy hours to bring in crowds when they would otherwise be looking at empty tables.

Electric Vehicle Drivers Still Save In the “Worst” States

On the other end of the spectrum are the 10 states with the lowest savings for electric drivers. Even in the “worst” state of Connecticut, charging your EV is still $353 cheaper per year than pumping gas when comparing the average electric vehicle to the average gas car on the road.

10 Lowest-Saving States for Driving on Electricity

In several of the “bottom 10” states the small difference in gas vs electric costs is due in part to the fact that folks drive less overall. For example, Floridians drive almost half of the national average miles per registered driver per year. Switching to an EV slashes Florida gas bills by a third, yet they weren’t high to begin with. This can make it seem like Floridians can’t save as much by going green, but what it really means is that Florida drivers are already green by virtue of driving less.

Electric Vehicles Even Beat New, Efficient Gas Cars in All But One State

For a fairer comparison, check out how electric vehicles stack up against smaller, newer cars. The average EPA fuel economy of passenger cars (not counting trucks) was 36.4 miles per gallon in 2014. Using that number puts gas and electric cars on a more even playing field. It favors gas cars since EPA estimates tend to be generous. The average electric vehicle is assumed to get 2.86 miles of driving per kilowatt hour of electricity from the grid. Using average electricity costs and comparing only newer, smaller cars, it’s still cheaper to drive on electricity in 43 of 50 US states. In 6 of the 7 states where electric driving seems more expensive, utility companies offer time of use plans that end up making it cheaper to drive electric after all.

The one state where it’s still cheaper to buy gas than electricity? Alaska. If you live in Alaska then filling up a new, efficient gas car can beat out charging by $3.44 per month.

There’s more to think about before deciding to get an electrical vehicle. This includes whether you can charge at home, the total number of miles you drive every day, and if there are charging stations in route to popular destinations in your region. But at least one variable is firmly in favor of electric vehicles: dumping the pump can significantly reduce yearly fuel costs no matter which state you live in.

Plugless Power data tables for the graphic can be found here if interested.