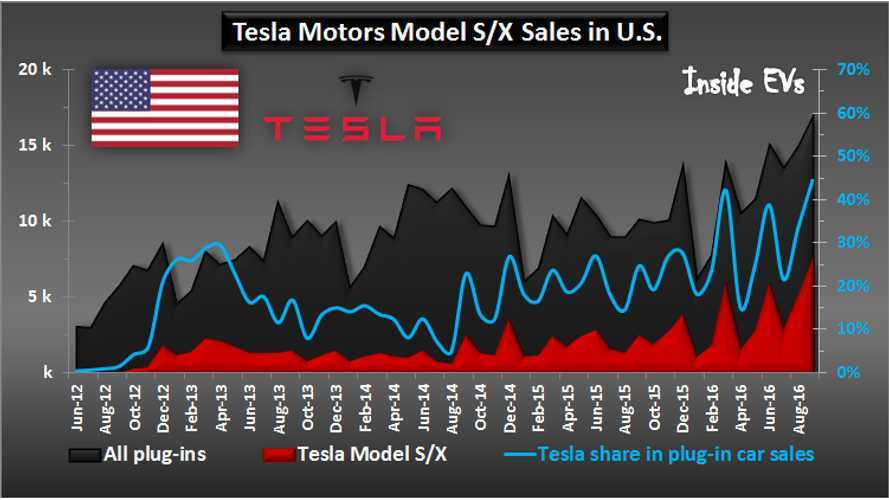 In the rush for generating great third-quarter results, and hitting full year sales guidance, Tesla Motors was able to deliver some ~7,550 Model S & X in September in the US by InsideEVs' estimates.

That is twice more than any other brand, and if we closely check Tesla versus the background of total plug-in sales in U.S., it turns out nearly 45% of registrations last month had a Tesla badge on it.

Overall for the year, Tesla has averaged 31% of the US EV market share, which also is the best result from any manufacturer; a result once might expect given that the Model S and X are first and third respectively in individual sales ranks.

The question now is whether Tesla will be able to achieve 50% during any of the remaing best months of the year (typically the most demand for EVs is found in November and December due to the calendar year expiry of the $7,500 federal credit when applied to purchases).

Excluding PHEVs there would be no competition for share in the all-electric segment, as the Tesla lineup up in September held a 70% advantage, with only the Nissan LEAF (1,315 sales) really hitting the sales radar.

Heading into 2017, the sales landscape will be altered dramatically with the introduction of the Chevrolet Bolt EV, upgraded Nissan LEAF and Toyota Prius Prime; which leads us to believe Tesla sales will likely register its all-time peak (in terms of market share in the US) in December, before settling back some.