Tesla Discontinues Base Model X 60D Before It Arrives, Will Model 3 Suffer The Same Fate? 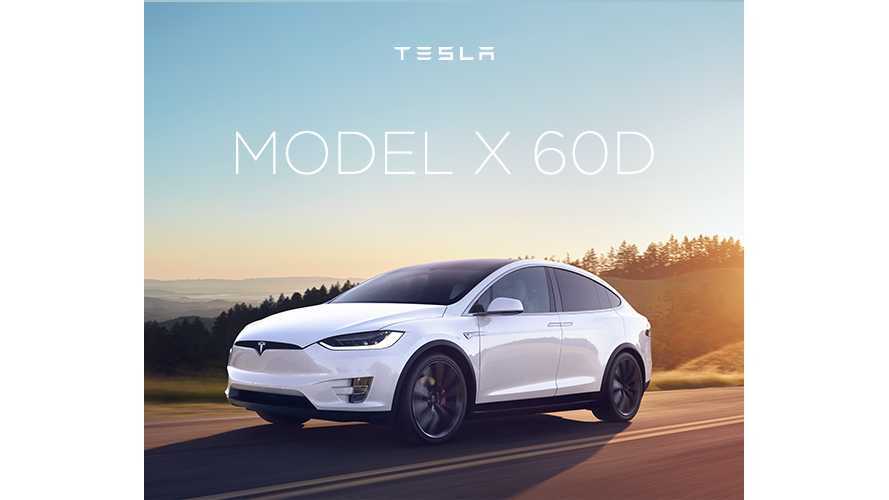 Like other Tesla base models before it, the Tesla Model X 60D didn't survive very long; heck, it was just about to arrive when the option disappeared.

Without comment, Tesla quietly ditched the entry level version heading into the weekend.

Just as a reminder, the Model X 60D was only introduced this summer in July from $74,000.  The 60 kWh version actually carried a 75 kWh battery on board, but was software limited to 60 kWh.

The reason could be weak demand for 60 kWh X, but more likely it is low margins on the vehicle, especially with that unused/unpaid 15 kWh worth of battery given away with each SUV.  Tesla has also recently stressed the need to simplify production.

Recently, Tesla did some tweaks with Model X options making Smart Air Suspension standard (a $2,500 option, that bumped the MSRP by the same amount). The result of all the actions together increases the base cost of a Model X by some $11,500 to $85,500.

Anyone getting nervous on base Tesla Model 3 pricing now?

While the plight of the base pricing of the Tesla Model X (and previously in the S) doesn't concern us too much, we are certainly feeling more than a little unsettled about the Model 3's promised starting price-point of ~$35,000.

Not that it would not be initially offered at $35,000...that seems assured;  but that it will quickly be discontinued and made unavailable in favor of higher priced options.

The Model X base price bump due to the discontinuation on the 60D edition is over 15%. A similar bump on the Model 3 would mean pricing around $40,500 by the time it is actually delivered.