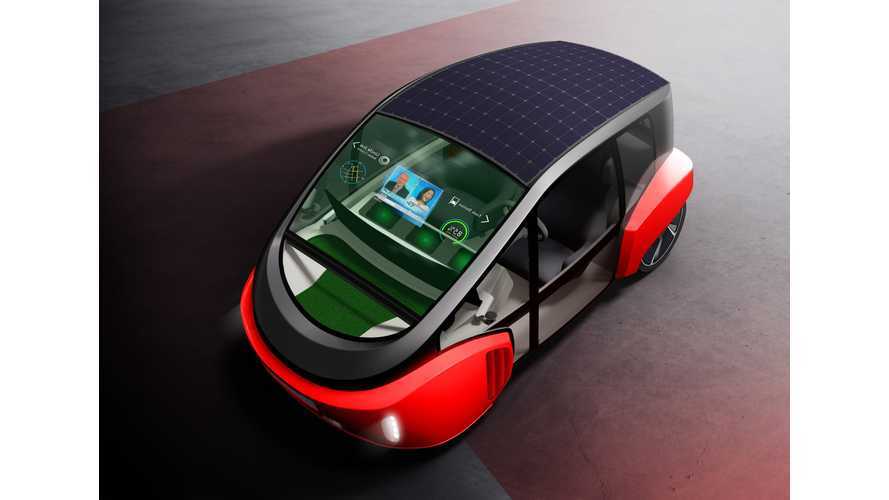 Rinspeed seems to really enjoy the Consumer Electronics Show, as the Swiss company intends to head back to Las Vegas in January with a new concept (see previous Rinspeed Etos).

The new Rinspeed Oasis is a quirky, light weight electric city runabout, with a solar roof and an autonomous driving approach at its heart.

These days, it is not hard to imagine cities with fleets of such vehicles some day, as individual transport solutions fill the gap between full-size private cars and walking, biking and public transport.

Rinspeed shows “Oasis” at the CES in Las Vegas in January 2017:

A rolling oasis of ideas in the automotive desert

With his new “Oasis” concept vehicle, Swiss car visionary Frank M. Rinderknecht has created a memorable character role in the narrative of the evolution of personal transport. Quasi as a lone voice in the wilderness, he makes a bold statement against the notion of a city jungle requiring multi-ton SUVs for survival with this clever self-driving electric vehicle for the urban sphere.

“Oasis” is a clear alternative concept to the martial appearance on urban asphalt. The exquisite two-seat runabout looks pretty futuristic with its large glazed areas and front wheel spats. Kind of like a trendy buddy of Star Wars icon R2D2. Both are capable of turning on their own axis with almost a zero radius. Not at all like a gray mouse and not solely designed with a single purpose in mind like Google’s cars, but rather “next generation” - with a host of technical and visual treats inside.

Speaking of the inside: The interior offers a new living space with the ambience of a modern-day family room: armchair, sideboard, TV, and a multifunctional steering wheel, of course. The windshield also serves as a screen for virtual as well as augmented reality.

Who will be the owner of the car, who will be the operator, and what will they use it for? Rinspeed boss Rinderknecht has designed and equipped the vehicle in a way that keeps all conceivable options open in a society willing to share its goods sensibly. “Oasis” can be commuting or shopping car in the morning, act as a “micro delivery vehicle” for urban parcel services in the afternoon, and be a pizza taxi on the evening drive home. This is made possible by a clever code-protected “drawer” in the rear, which can also be cooled or heated as needed. Why move only people in an innovative way with disruptive technology and not also small consignments (at the same time)?

However, Rinderknecht welcomes people to take the name “Oasis” literally as well: The creative Swiss national has integrated a small green space for growing flowers or radishes below the windscreen. Urban gardening on wheels, so to speak. A little bit “out there”? Maybe. But definitely a source of inspiration for everyone looking for something new in the automotive wasteland of uniformity.